I had the privilege of being invited to preview the traveling exhibition of art and memorabilia that usually reside in “The Bleak House“.  Owned by visionary director Guillermo del Toro, the house is legendary due to it being less of a house and more of a love letter to monsters, the macabre, Guillermo’s films and film heroes. 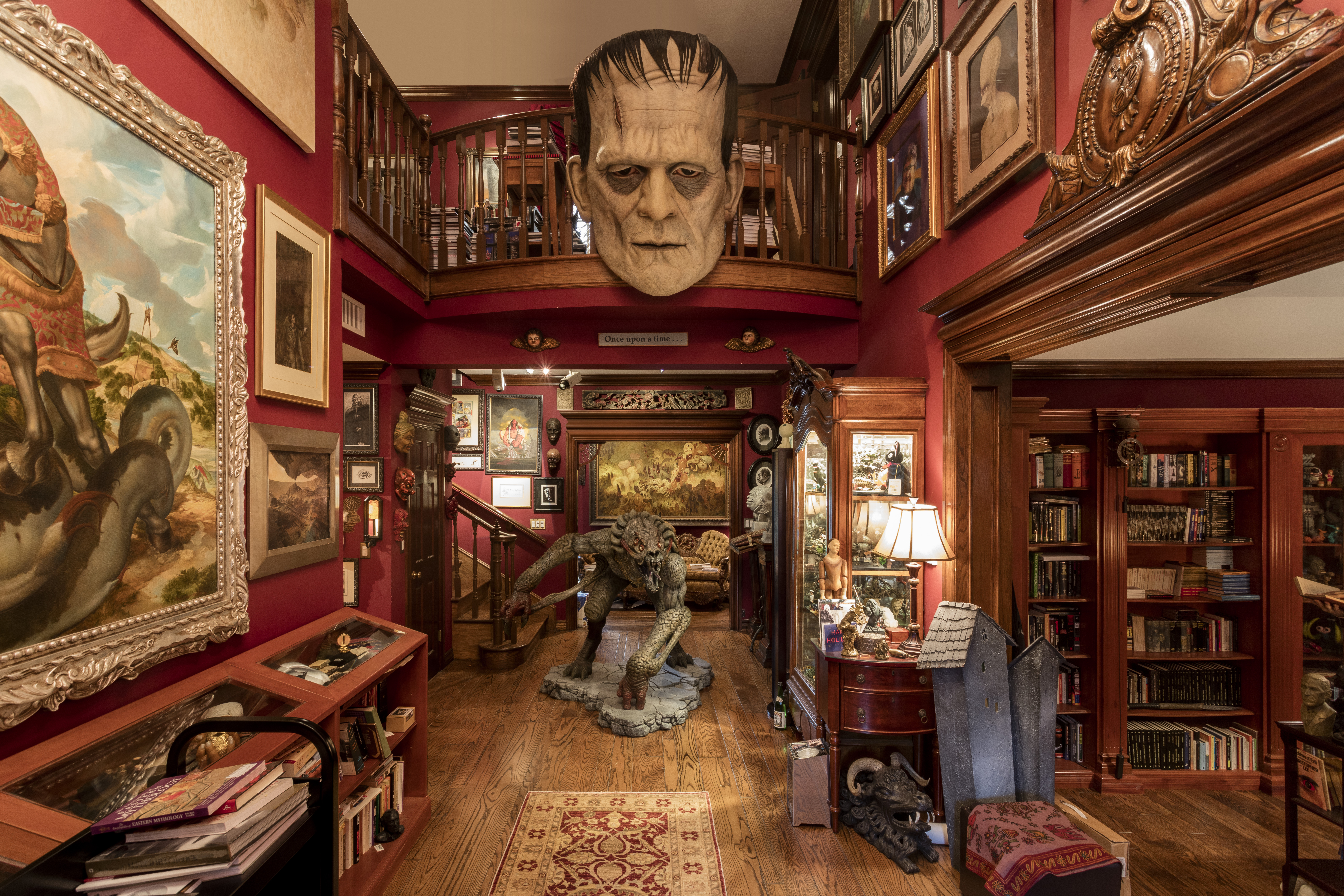 To kick off the event we had the man himself come and speak with Rue-Morgue Editor-In-Chief Andrea Subissati about the exhibit and his love of monsters.  The event was supposed to start promptly at 10 with 30 minutes for the opening remarks. They started 20 minutes late. In all my years of attending these exclusive art previews (which is zero) this was unusual.  Then again,  given the content of the exhibit,  “unusual” seems to be perfectly apt. 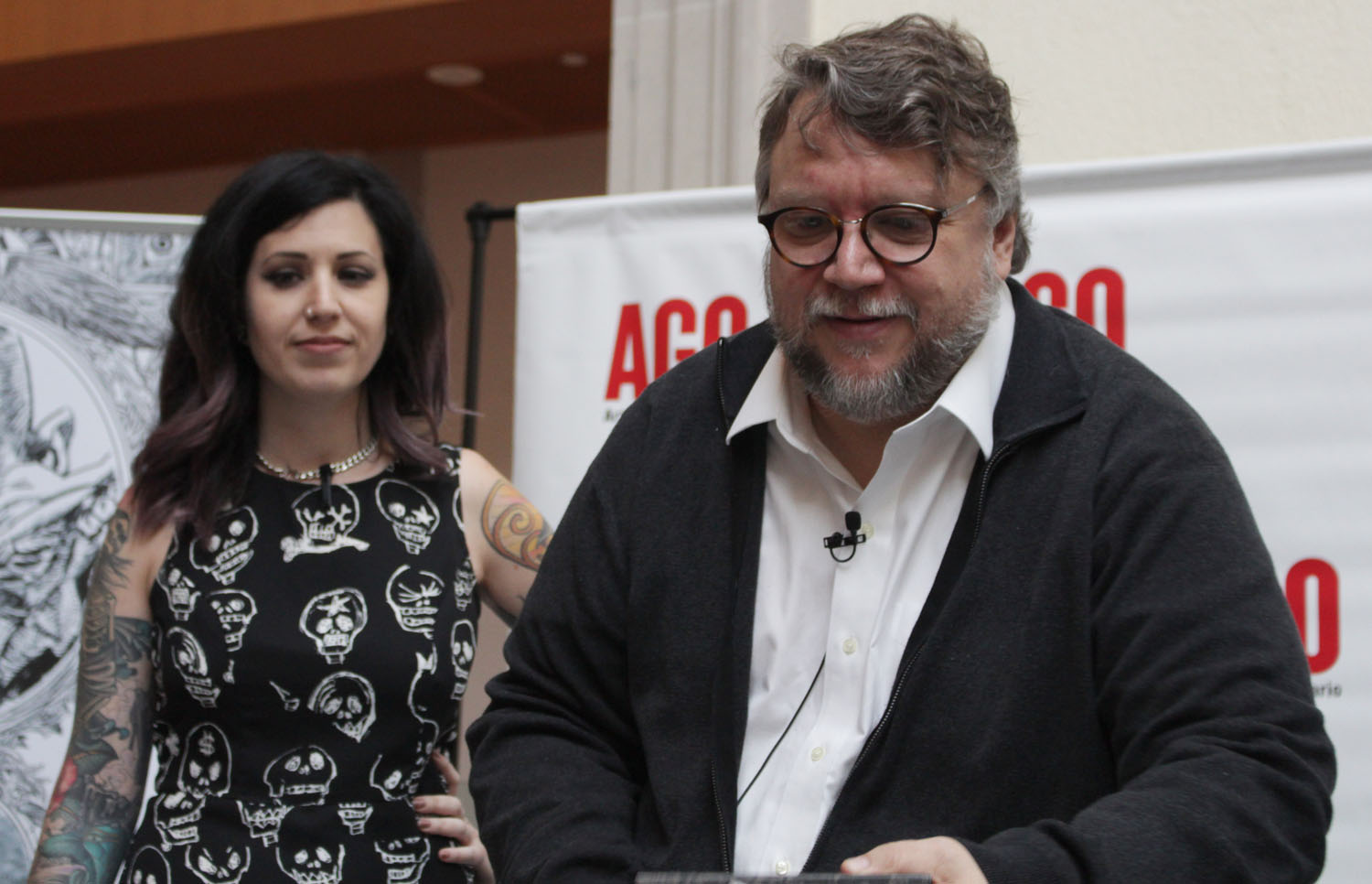 Entering the exhibit itself is much like what I think entering the Bleak House would feel like….a sensory overload. Never have I seen the space of the AGO used to such maximum capacity. Katy Chey, the Exhibition Designer at the AGO, went to great lengths to have you completely forget you are in Toronto or the AGO and transport you into del Toro’s world and creature comforts of home. The walls have been painted crimson red (specifically, Benjamin Moore AF-290 Affinity Calente), along with the use of  flameless LED candles, four wrought-iron suspension lamps and ten candelabras to give you the ambient lighting of an old stately home. 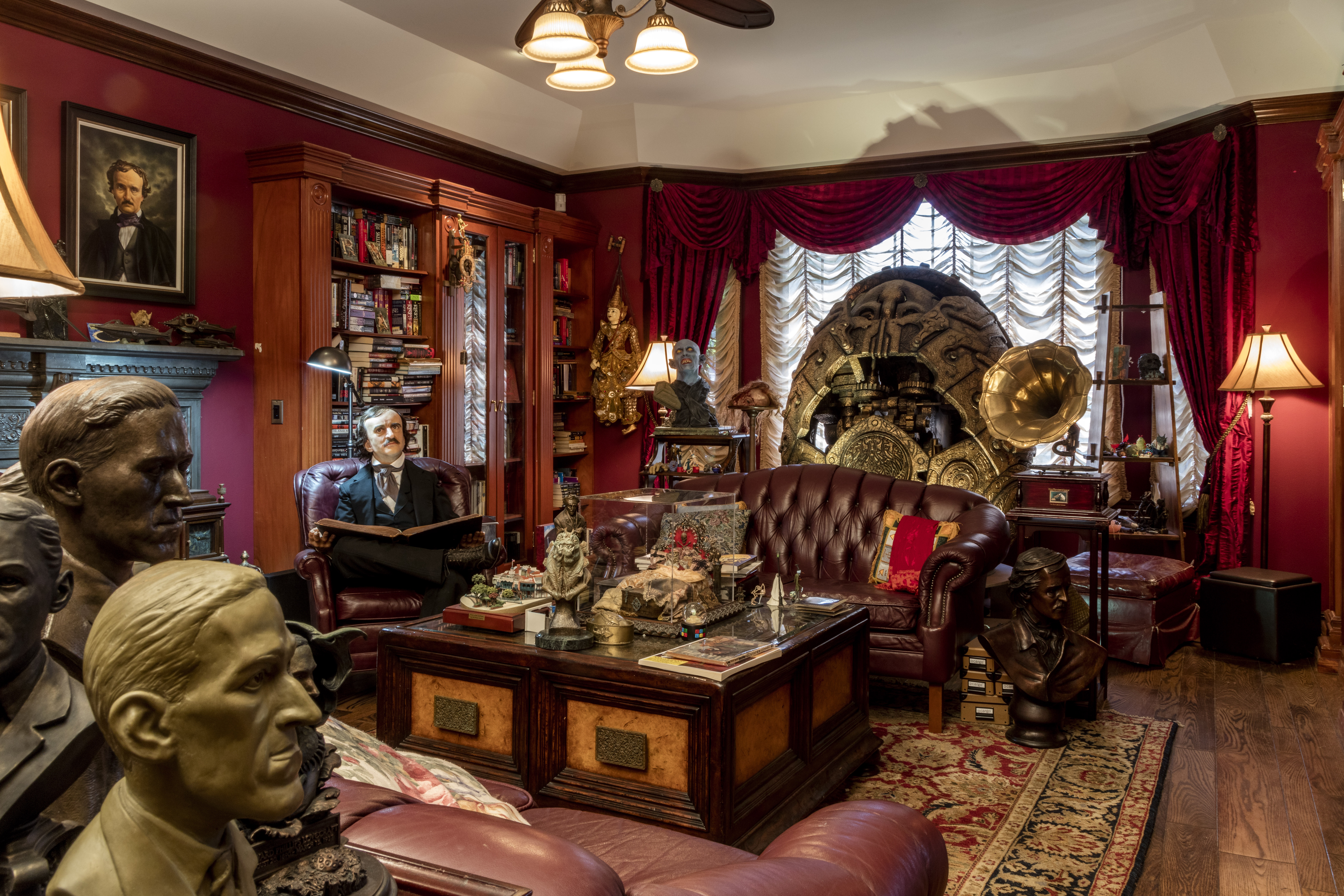 While I am admittedly not a huge fan of his films, I am wild about his aesthetic. His creatures, concepts, color palettes and imagination are very close to my heart and there is something really magical about watching his eyes light up when talking about monsters as if its his first time broaching the topic. That endless excitement and wonder is felt in every inch and around each corner of the exhibit.

I felt that excitement tenfold when I turned the corner and came face to face with original illustrations of one of my biggest inspirations, Scary Stories To Tell In The Dark illustrator Stephen Gammell. So frightening were his images that they were removed upon second pressing of the book.  If I look like I am in love in the above picture, it’s because for the first time, I truly am.

As you can see, Guillermo loves comic books and horror magazines. His collection covered a room, literally. To give you an idea of the scale, I am 5’4 tall.  That means Dave Alexander (pictured) of Unknown Horror would be probably around 6’3 tall.  Given that, I would say that the comic book room is around 3 Dave Alexanders high, and around 400 square feet (the size of an average Toronto apartment).  Its overwhelming and in that room alone it could take hours to take in each and every item on display. 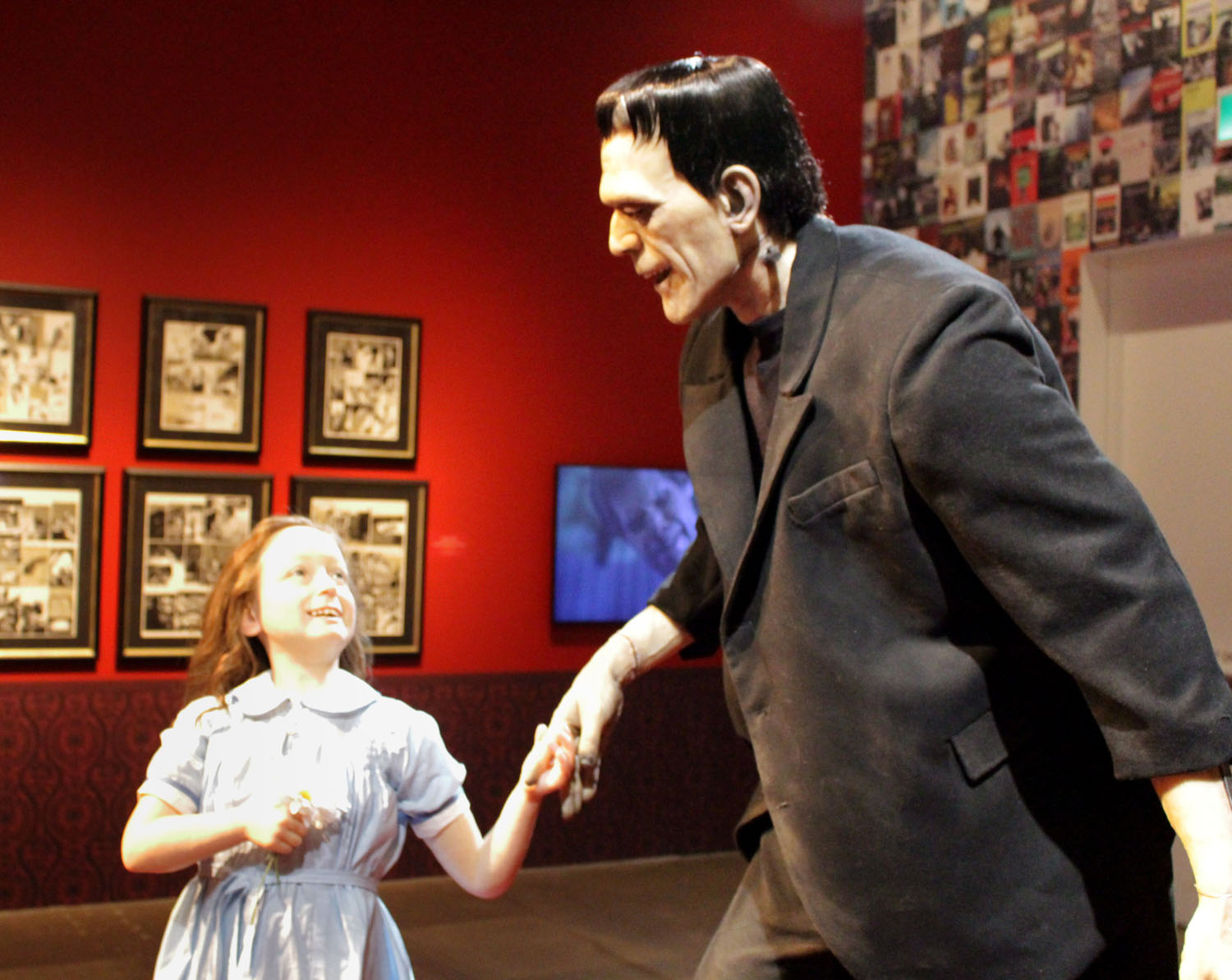 After rooms filled with original Basil Gogos (RIP), Edward Gorey’s, life size Lovecraft’s and more, we come to the end with this beautiful life size and lifelike piece of Frankenstein’s monster and Maria from the original film.  There is a really sweet innocence and wonderment to this piece and I think it’s a great note to end the exhibit on. 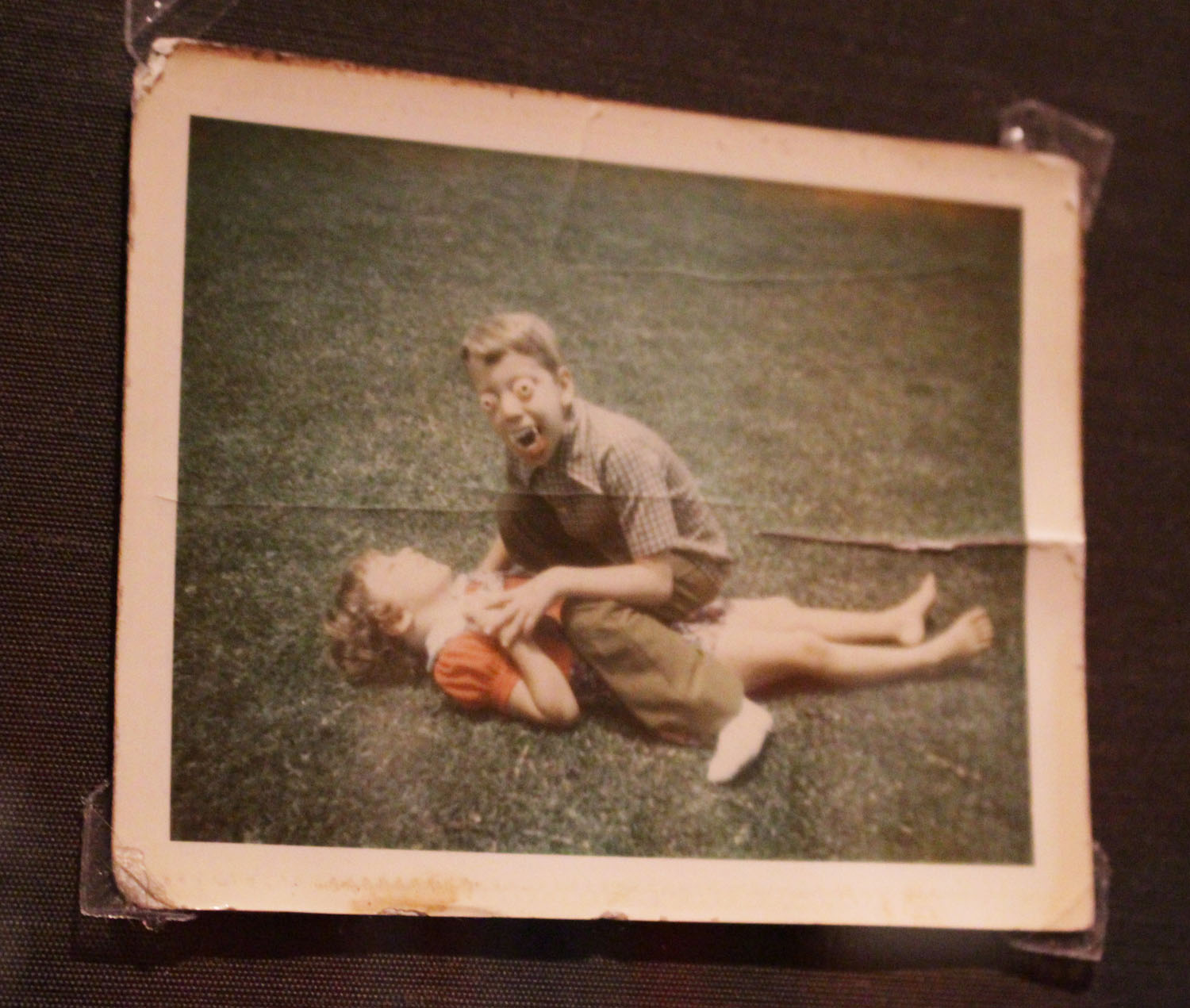 Photo of Guillermo as a young boy, with sister Susan in a monster mask. (Photo by Justin McConnell, Unstable Ground)

This last image here wasn’t towards the end of the exhibit, rather the start of it.  I wanted to include it because I always love seeing the early years and the people who helped mould the minds of visionary writers, directors and artists.   Though the exhibit itself features works of art that would sell at auction for millions, this old family photo was my favorite. It is nice to see that Guillermo del Toro’s love and understanding of monsters was a family affair and something that started at the very beginning.

Guillermo del Toro: At Home With Monsters runs from September 30 2017- January 7 2018 at the Art Gallery of Ontario.