I know, I know…how on earth do you consider a movie called CLOWNTERGEIST a serious contender for a decent B-horror film? I wouldn’t and I am seldom wrong.
Seldom.

Coulrophobia is a fear of clowns and our main character, Emma (Brittany Belland), suffers from this condition. She won’t even eat a clown popsicle! But in this small town of “Whatchamacallit’, there is a demon lurking about in a permanent clown suit named Ribcage (you can draw your own conclusion as to the origin of that moniker). Consequently, he is drawn to the panic that dwells inside mostly young female co-eds thereby haunting them until the ‘final attack’ time arrives. 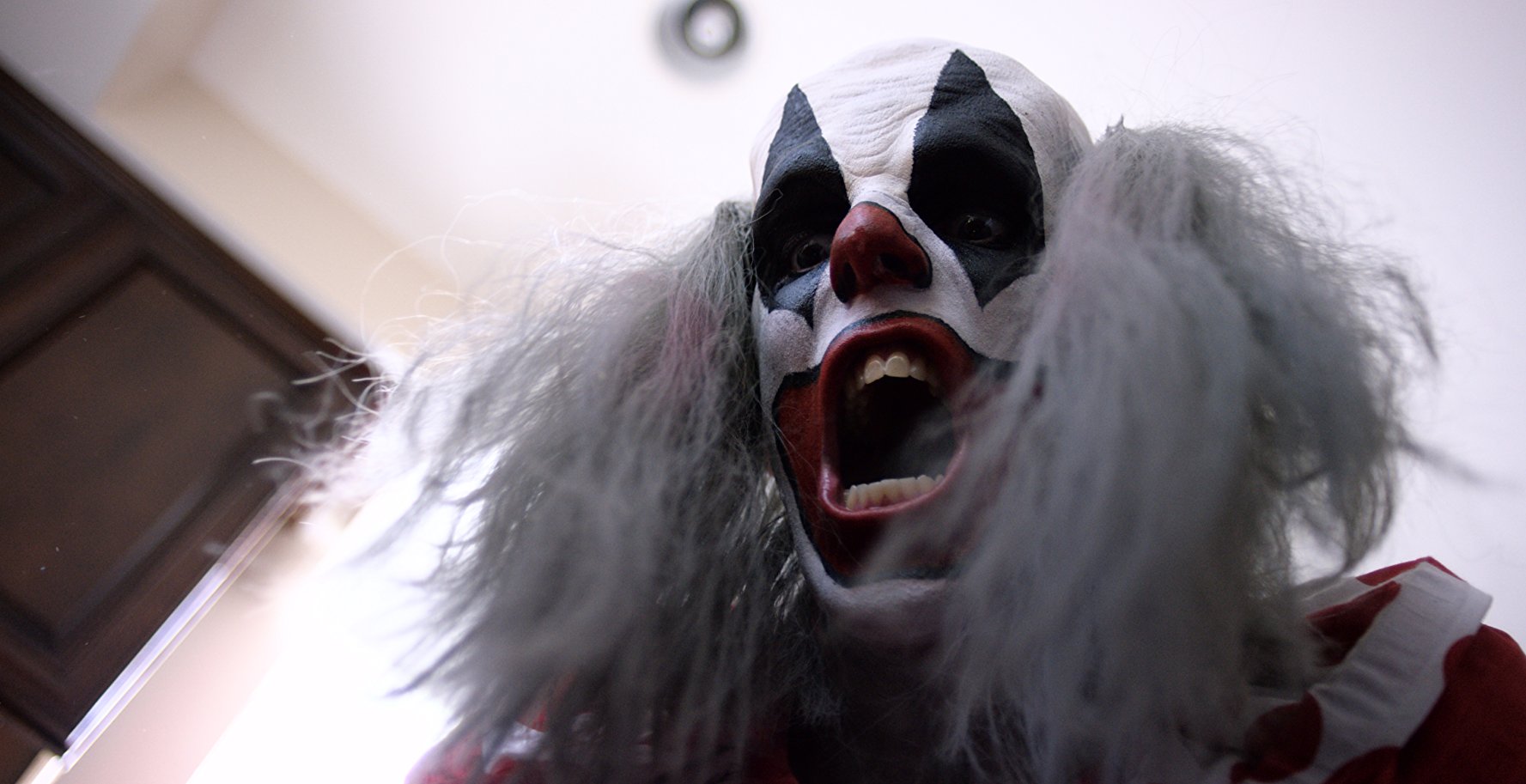 Emma and her roommate Heather are your average college girls, working at a little ice cream parlor/diner and trying to get through their lives like typical ambitious youngsters. When the town is on lock down to hunt a vicious killer, Emma gets excited. After all, NOTHING happens in this sleepy town.

So obviously, we know immediately that Emma becomes Ribcage The Clown’s new target and the entertainment begins. With intense jump scares, gruesome red balloons painted with cryptic notes, and plenty of bloody black vomit (???) Emma runs and hides every chance she gets. Unfortunately, enhancing her fear only increases Ribcage’s intentions more hungrily.

Brittany Bellands portrayal of Emma is actually quite refreshing. She’s a plain-Jane, trying to escape this nasty little situation without endangering Heather (Monica Baker) or her handsome boss, Jonah (Sean Patrick Murray). While Ribcage (Eric Corbin) has absolutely no qualms when it comes to appearing straight out of the blue, he is menacing, creepy and all around gross as he writhers around, screeching like a drowning cat.

There is an interesting if slightly predictable twist at the end, still encouraging the wickedness of clown fear, which is real. IT, CIRCUS KANE, KILLER KLOWNS FROM OUTER SPACE, 31, THE DEVIL’S REJECTS, etc.

This was shockingly fun! Never judge a film by its name. I had little to no expectations for this POLTERGEIST/IT bastard baby of a flick. And it wasn’t half bad!

Let’s face it: CLOWNS ARE SCARY AS HELL! And CLOWNTERGEIST just heightens the nightmare.