Our next review from the trio of shorts by Neville Pierce is called GHOSTED. For more information on this shorts block, check out our first review posted here. Full disclosure, this one is NOT a horror film… but it does involve a hefty dose of the supernatural. Even if that supernatural element is played for comedic effect.

GHOSTED is the story of a recent widower named Rebecca (Alice Lowe) who has recently re-entered the dating scene. A title card letting us know the number of the date, as well as the guy’s name, marks each of her encounters. As the film opens, Rebecca is sitting across from date #1, a guy named Paul (Ray Panthaki). Paul is shoveling food into his face at an alarming rate, clearly uninterested in anything Rebecca has to say. He’s not listening at all, and her frustration manifests itself in the form of her deceased husband Nigel (Christien Anholt). Nigel is not pleased with this dude as he paces around the table trash talking him. Of course Nigel is only visible to Rebecca, but to her it’s as if he’s in the room. This date is clearly not going well, and Nigel is all too quick to point that out. Oh, and this is only the first date of many.

Next up is another widower named Daniel (Jason Flemyng). He seems very eager to show Rebecca photos of his kids until he reaches a picture of his deceased wife. He starts to lose his composure, and looks at the picture with longing in his heart. Nigel whistles to show his approval of the man’s ex, as well as to break up the tension. Nigel warns Rebecca that this guy comes with baggage, and a lot of it. At this moment Rebecca glances over to another table where a man (David Elliot) seems to be having similar dating issues…too similar. The two exchange a look and a smile and it’s on to the next date.

Rebecca’s next two prospects are different, but also pretty bad. One man is immature and barely into his twenties (Jassa Ahluwalia), while the other (Richard Glover) attempts to maintain an awkward “4 minutes” of uninterrupted eye contact as a “shortcut” to intimacy. Nigel isn’t thrilled with these fellows either. Rebecca once again sees the man from the other night and the two wayward lovers exchange glances yet again. Nigel doesn’t seem pleased with anyone she meets, and granted they’re all pretty awful. It almost seems as if Nigel doesn’t want her to move on.

GHOSTED is really a love story at its core. It’s a story about the difficulties of finding love, as well as how people deal with the loss of a partner. Is Nigel really here guiding Rebecca’s actions from beyond the grave? Or, is Nigel only an expectation that she’s holding her future lovers accountable to? Neville Pierce does a wonderful job treating this subject matter as lightly as possible. It’s romantic, comedic, and often uncomfortably funny. It can’t help but resonate with anyone who’s ever attempted online dating, or anyone just trying to find a meaningful romantic connection. The film is shot entirely in black & white giving it an almost 50’s era nostalgic feel but, with all the pitfalls of modern dating. It is definitely an artistic choice by the director, and one that lends itself well in service of the narrative. 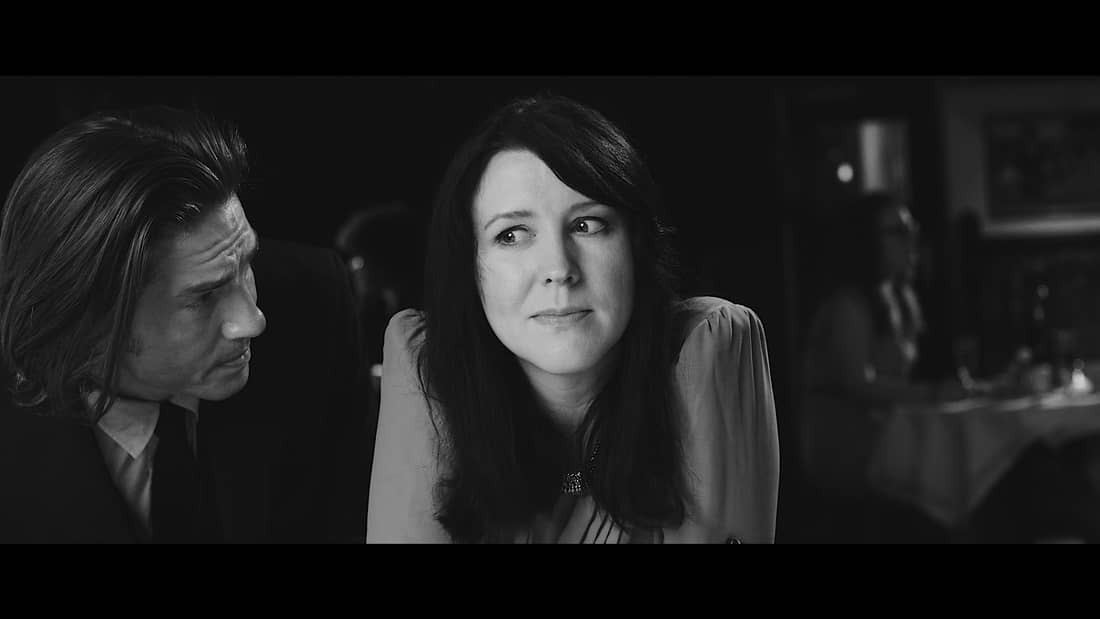 Just like the director’s other works, GHOSTED is loaded with recognizable British actors. Jason Flemyng and Alice Lowe seem particularly comfortable, given a chance to let their hair down in a short film. Lowe turns in a memorable performance as the haunted widower, and that’s an impressive feat given the 11-minute run time. This film is a nice little romantic piece just in time for Valentine’s Day. I could easily see this film being turned into a feature, and I wouldn’t be opposed to seeing where else this story goes.