Editors note: This review contains images with nudity. I mean, the film IS called NOTTE NUDA which translates in English to NAKED NIGHT so….yeah it’s NSFW.

Whether considering the sophisticated brush strokes of DARIO ARGENTO’s “SUSPIRIA” or the crude grime of ANDREA BIANCHI‘s “BURIAL GROUND: THE NIGHTS OF TERROR”, the most watchable Italian horror shares a common theme– don’t be afraid to show your work. This philosophy seems both encouraged and celebrated across the entire spectrum of the sub-genre. While their American and British counterparts make more use of shadows and quick cuts to hide sub-par visuals, Italian horror directors are regularly thirsty to display their thoughtful creations of depravity. And for better or worse, there is little regard for your subjective definition of “realism” or “quality”. Director LORENZO LEPORI (CATACOMBA) carry’s on the tradition of his Italian forefathers in his latest “ghouls in the woods” flick,  NOTTE NUDA (aka NAKED NIGHT) . 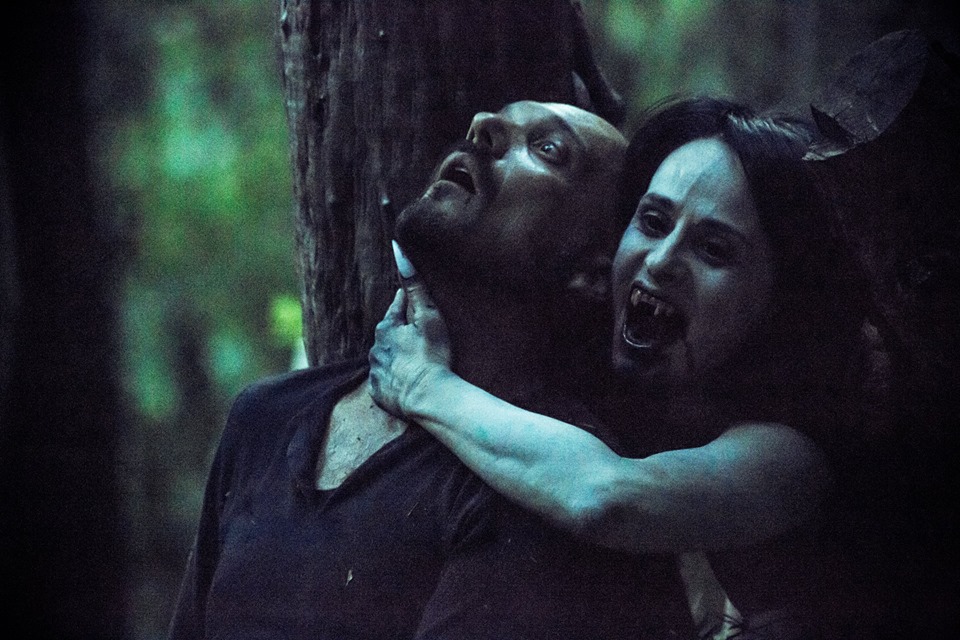 Penned by both LEPORI and screenwriting veteran ANTONIO TENTORI (A CAT IN THE BRAIN, SYMPHONY IN BLOOD RED), NOTTE NUDA has a lot going for it. The opening sequence is fairly promising in that it wastes no time to show its cards. The film starts with a chiseled man awaking to chop wood in the forest outside his rural cabin.  After stumbling upon a charred corpse in the hollow of a fallen tree, we learn this forest is crawling with something far more sinister. Beyond his eventual confrontation with a werewolf-like creature and a fully lit naked-vampire-ghoul-lady (tree nymph? maybe?), this scene successfully conveys an unsettling level of tension with its serpentine camera angles and creeping synth-driven score composed by MARCO NINCHERI. Well played NOTTE NUDA, you now have my attention. 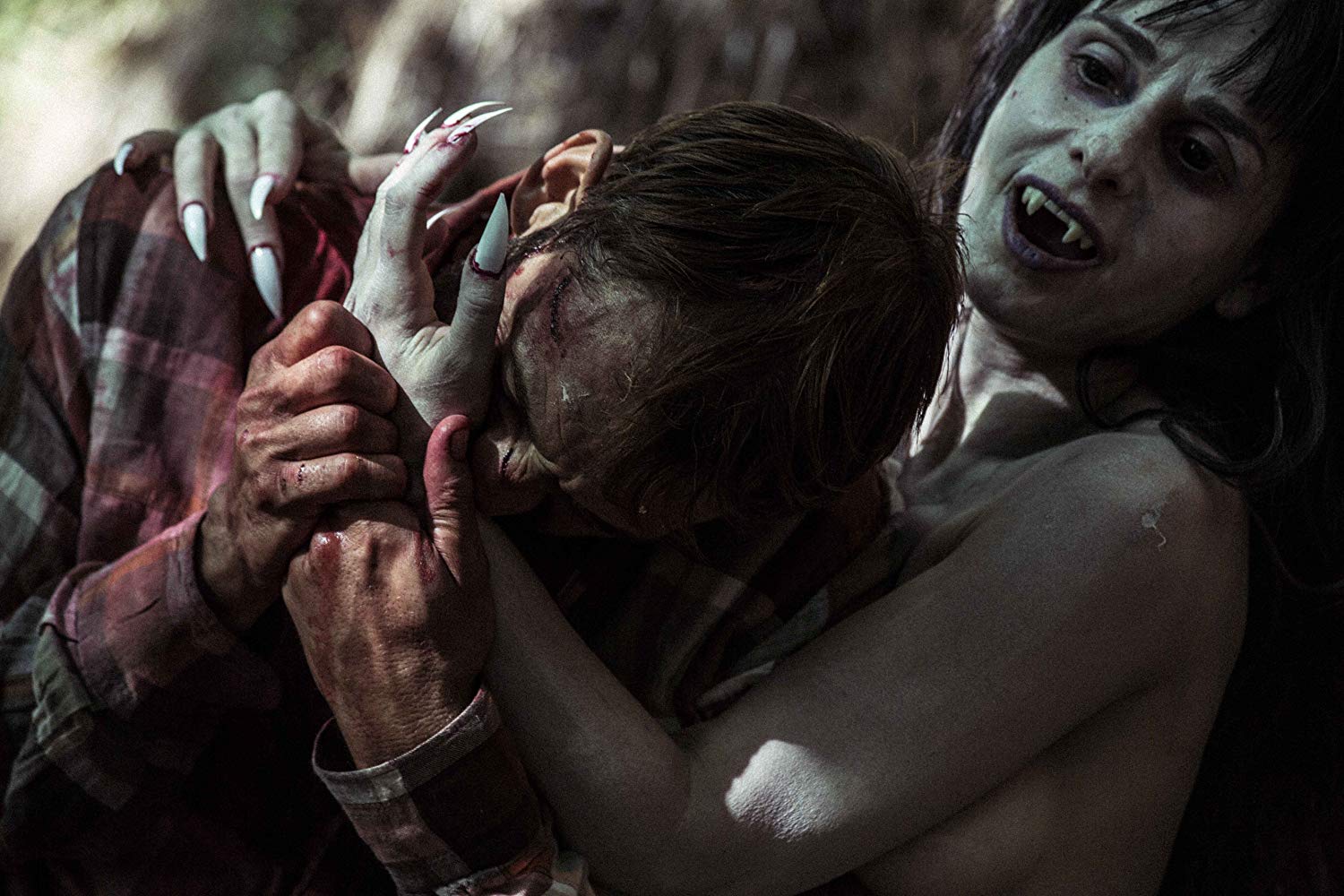 As the vulnerable opener completes, a tonally different story is abruptly served. Here we meet our two leads, Paolo (PASCAL PERSIANO – DEMONS 2 and FULCI’s VOICES FROM BEYOND) and Andrea (HENRJ BARTOLINI –  CATACOMBA  ). Reunited after many years, Andrea eagerly introduces his old friend to his girlfriend Milena (YANA PROSHKINA – POSSESSIONE DEMONIACA). During a drawn out but still adequately interesting dinner scene, we become familiar with these character’s dynamic via an abundance of dialogue and smacking close-ups of Andrea chewing down a steak. After the meal, our leads proceed to a wild night of montage style partying. If I’m being honest, by this point the flick began to lose me on at least some level. Particularly the painfully contrived dance sequences which were distracting and that the lack of budget becomes glaringly obvious. Regardless, for what it’s worth- this party montage could be used as a public service campaign meant to warn people about just how fun cocaine can be.

Without spoiling, the latter half of the film presents Andrea and Paolo trudging through the woods in attempts to find the perfect place to bury Milena’s body. No surprise here, these are the same creature-infested woods portrayed in our film’s opening sequence. The two are soon stalked by a diverse cast of blood-thirsty abominations. It’s a wonderfully miserable scene chock full of fun gore and unnerving visuals. Thankfully, this accounts for at least half of the movie. 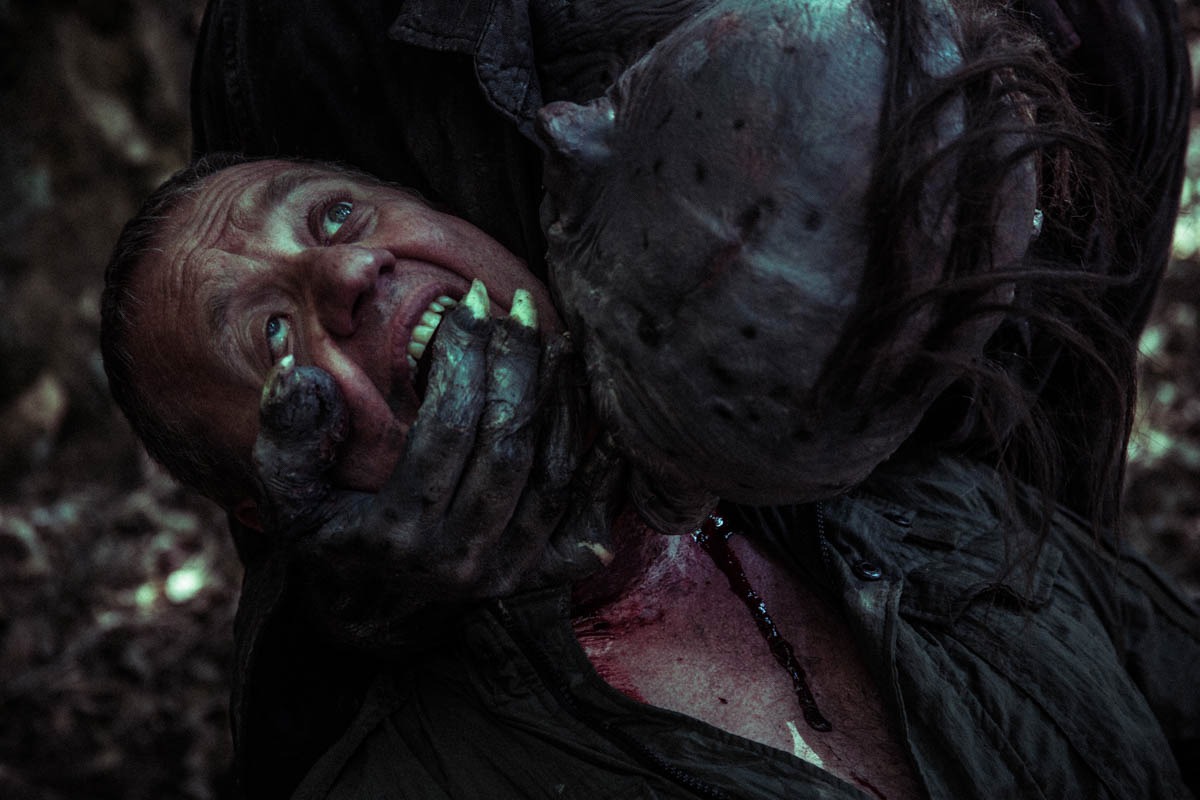 This film left me conflicted. While floating on a fairly straightforward and arguably unoriginal story, it’s execution oozes legitimate genre-love and the overall effort is just so God damn valiant. Is NOTTE NUDA  a “good” movie in the conventional sense of the word? Not particularly. But for what it lacks in story, it makes up for in thoughtfully dissonant camera movement, some above average performances and genuinely unsettling imagery. It’s far from a lazy film. For the horror fan that values violent eroticism and nudity for the sake of nudity (seriously, who doesn’t?), NOTTE NUDA is highly digestible trash. Non-horror fans need not apply.

NOTTE NUDA can be purchased on AMAZON and select online/retail stores.