Well lets begin in Australia, where this upcoming horror show and it’s hosts hail from. The aforementioned show is called HORROR HOUSE, a horror anthology series in a similar fashion (and format) to shows like TALES FROM THE CRYPT and ARE YOU AFRAID OF THE DARK?. Australia has been a long standing mecca of horror and HORROR HOUSE  aims to be a new platform to showcase that. It’s hosts are a real life “Beauty and the Beast” team that go by the names of Mistress Boobiyana and Count Funghoula. I had a surprise encounter with them and felt strongly compelled to share it with you all.  This is an unedited and uncensored word-for-word transcription of the strange interaction I had with these two at my office.  Let me set the scene for you all.  It was your average day. I was alone and working away as usual. I stepped out for a minute and came back to well….this.

MB: (Smacks CF )Don’t rush me!!
MB makes her way to the liquor cabinet across from the filing cabinet!

CF ….. Shhhhhhhhh. I can hear someone coming. Ve must hide! Qvick! 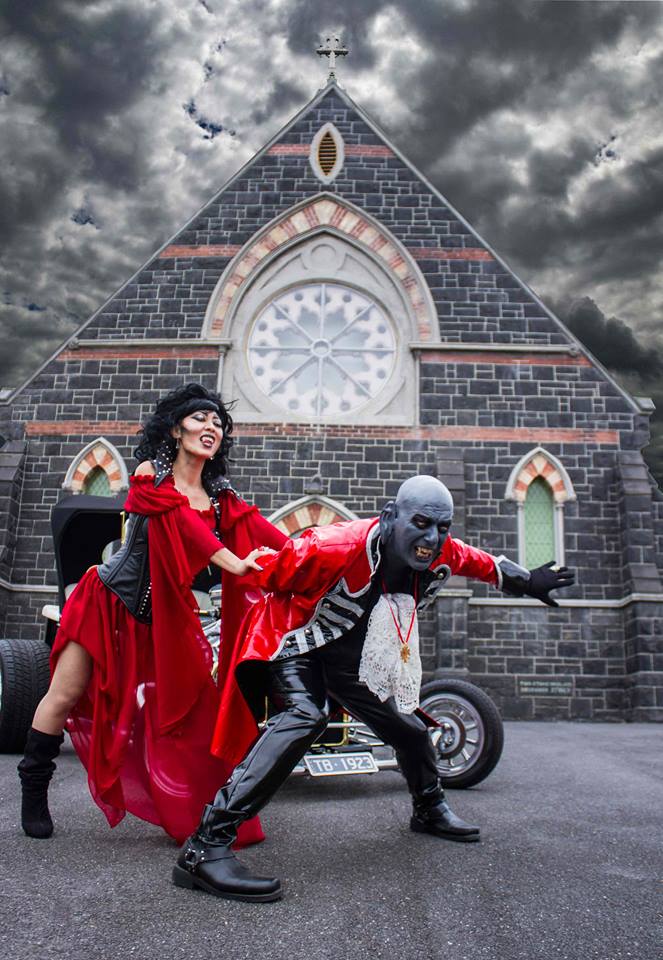 AMY (FEAR FOREVER): WHAT THE FUCK ARE YOU DOING? ARE YOU GOING THROUGH MY FILES???

MB – Only the ones buzzing around your arse Fungy!

AMY(FF): Who are the fuck are you?

AMY: Okay….No offense here my dudes….but you look fucking wild. Where are you from???

CF: Ve are your imaginary creations from Australia.  You opened de box and your mind conjured up Mistress Boobiyana and Count Funghoula of Horror House.

MB:  Yes why your mind must be a literal Pandora’s Box Amy, from all the scary stuff you look at for your website, maybe one too many old horror movies mixed with stories of scary creatures from the land down under and a few too many drinks, then BOOM!! Here we are! In your imagination!!

AMY: What the fuck are you doing rifling around in my files?

CF: She vas looking for a menu for takeaway.  Do you know of anyvere around here that has pickled bats nipples and deep fried, crumbed Cthulhu?

MB: It’s not my fault that all this information on rival horror show hosts just happened to pop out.  Oh, and talking of things popping out …. PUT THAT AWAY FUNGY!!!  You disgusting old perv!

AMY: So I’m still kinda pissed that you guys went through my things and that Mistress Boobiyana has drank nearly all my tequila but I’m also really intrigued. Let’s go back a bit here because I want to know more about you both. What were the things that helped shape the fucking ghouls that you are today?

CF: You vant to know vat goes on in de mind of an imaginary conjuring of your own deep subconscious?  Looooook deep and you vill see …. (to the tune of “My Favourite Things”) Schreck in NOSFERATU and Bela Lugosi.  De tree stooges boppin and HAMMER HOUSE OF HORROR, TROMA for schlockiness and EVIL DEAD for blood … dese are a few of our favouriiiiiiite tings!

MB: oh yes Fungy!! EVIL DEAD, oh I loved those!! And from the deepest recesses of long ago memories of old shows like TALES FROM THE CRYPT and Elvira, and films like SAW, ANATOMIE, and of course the classic THE HUMAN CENTIPEDE!! Something soooo exciting about being able to cut people up and torture them!! Oooh it really gets my juices flowing!!!!  And that’s part of the reason why I love doing this show!! I get to torture Fungy every single week!! And it’s so fantastic that he’s a vampire so we don’t have to keep looking for fresh victims cos his parts always grow back!! And even better it’s all on film!!! It satiates both the sadist and exhibitionist parts of me!! 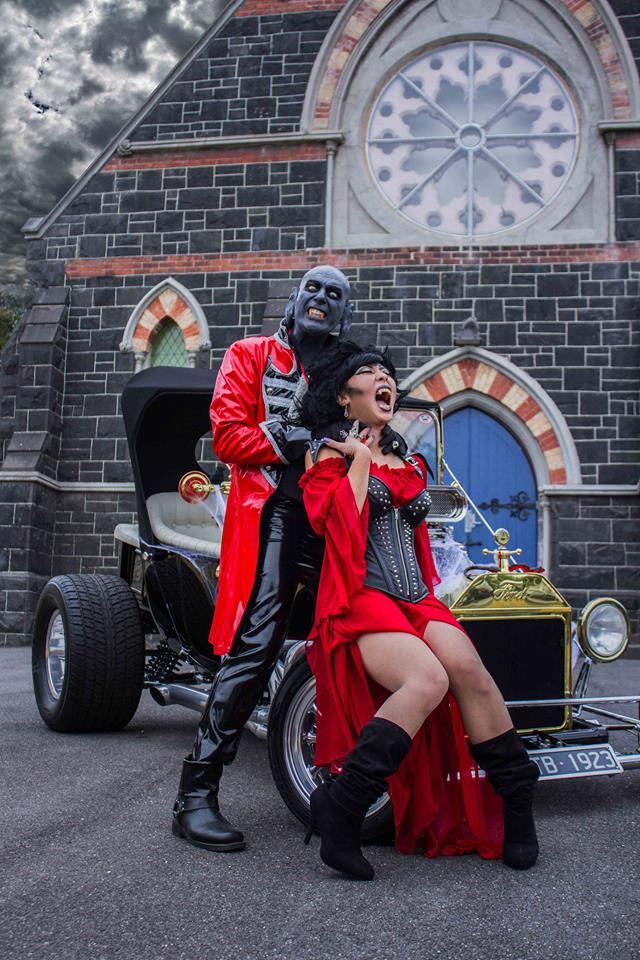 AMY: How did the show you host come to be and how did you two join forces to be the MC’s of the program?

CF: Dere are many, many good short horror movies made by indie film makers in Oz.  Most only get seen at the odd small film night or are seen by just a few dozen on YouTube.  I vas asked by David Black to help save dese poor wretched film makers.

MB: yes well Initially, David approached filmmaker & actress, Tritia DeViSha, as he wanted to screen her film, “The Kali Geisha Erotica Grotesque”, as part of the lineup for the pilot episode. Then a little while later, we heard that they were looking for a sexy female vampire co-host. So Tritia quickly got me in contact with that eveel mastermind David, and of course how could I refuse the chance to watch awesome horror shorts, co-host a platform to showcase it all, PLUS get to torture Fungy on tv every week? Such a perfect gig!! So I came on board and the rest is history!!

AMY: While you two were invading my privacy I was outside doing a quick search on HORROR HOUSE. It will be a half hour episodic show that features Ozploitation short films that will be selected and presented by you two, is that correct?

CF: Guilty as charged, but you can blame de vench for dat.  Ever since de Garden of Eden, she has been pulling dese stunts to degrade humanity!

MB: yes, well humanity loves to be degraded after all.. as much as they might try to deny it we know you all secretly love it. After all just look at the characters on reality television these days.. we’re just taking it a little further.

AMY: What can audiences expect? Will it aim to scare, entertain or both?

CF – All Australian short horror movies is good, but ve like most the schlocky, bloody, sexy and imaginative.  De more ve can mix it up vith different types, de better.

MB – yes, and because it’s a show comprised of shorts from different filmmakers every week, it’s always fresh and different which is great. And in regards to us, well I think it’s rather sick, twisted and funny and just gets more twisted with each episode as that demented mastermind David Black conjures up crazier and more shocking things for us to do on each new show!! 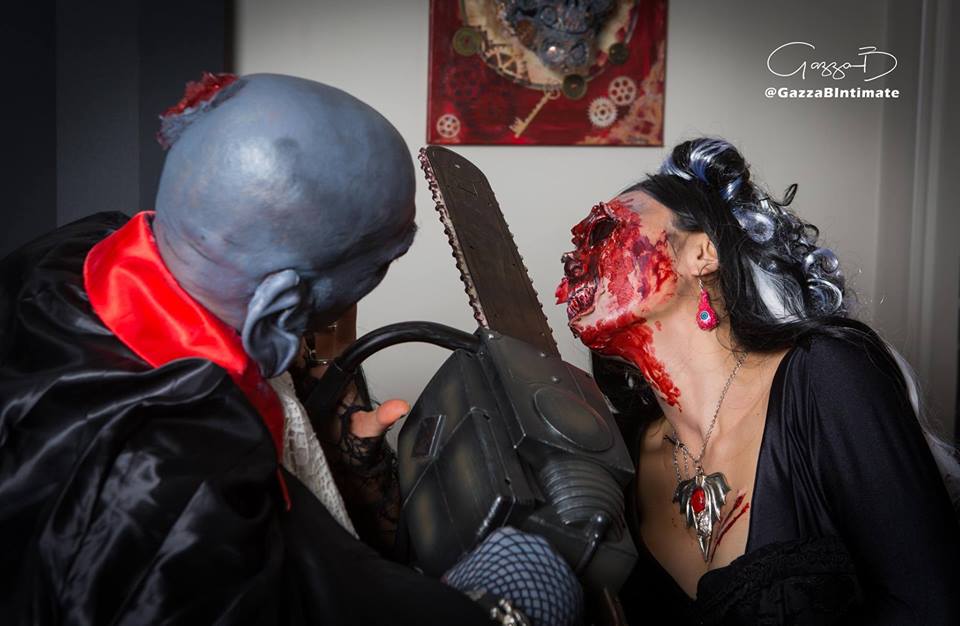 AMY: As of now there is no specific release date but you are aiming to have HORROR HOUSE on Australian TV and VOD this year. What are the factors that still need to fall into place before you can drop your seasons premiere?

CF: Ve are just vaiting on the final edits of the series.  De editor is currently moving house and ve are using dis time to do photoshoots and create short video skits to build a following to help us sell it.  The bigger de following ve can show on facebook and the more views we get on YouTube for our promotional skits, de higher de chance ve have of selling dis.

MB: Yes. So like & follow our page, subscribe to our Youtube, and watch and like all our videos!! And watch them over and over and over and over again!!! BAAHAHAHA!! Otherwise we will send our little ghoulies to come and haunt you in your dreams!! BAAAHAHAHAHAHAAAAA!!!

AMY: What can Aussie horror lovers do to get their hands on the show asap?

CF: Ve have plenty of short videos going up on Youtube to give them a taste.  https://www.youtube.com/channel/UChNUuG84Sakk7AVSpJ4yTOg

AMY: Where can people go to get updates about the show and both of your wheelings and dealings?

AMY: Is there anything else you want me, our readers and your competition to know about yourselves or the show?

CF: Ssssssh Boobiyana!  Do not tell dem about the blood, vomit, spooge, poo and anything else wet and shticky!  And definitely do not mention castrations and other bodily dismemberments!!!

MB: Fungy you fool!!! You just told them!!!! (MB smacks CF, then recomposes herself) … ahh but who cares, maybe they like a little wet schticky!! … I know I do… BAAHAHAHA (MB licks her lips) 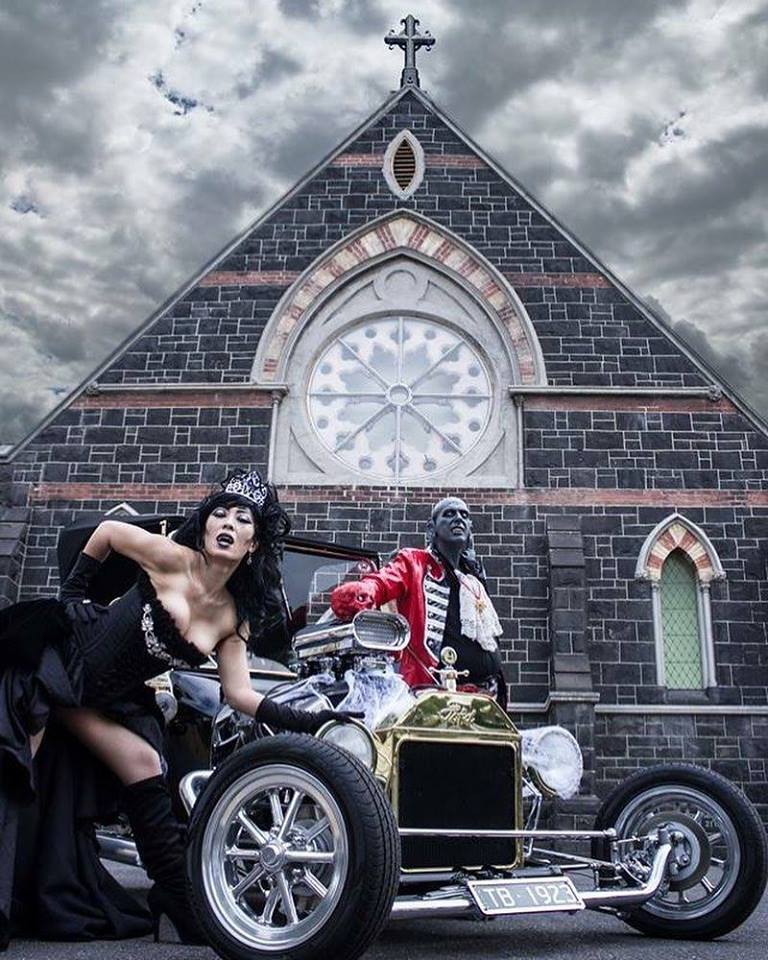 AMY: What is next for you two?

CF: Ve are vorking on a feature movie – “THE RE ERECTION OF  THE MARQUIS DE LARDE”.  Ve vill be setting ourselves a hard, cracking pace to get dis one done.  Ve vill be going to all de underground places in Melbourne, from bondage clubs and see burlesque dancers, carny performers and everyting dark, mysterious and secret!  All in de search for de body parts and talismans to re erect the infamous Marquis De Larde!

MB – Ooooh yes, that will be very exciting, I’m very much looking forward to that!! And also we’ve been doing series of HH photoshoots which will be published in various magazines over the next few months and towards the later half of the year especially around Halloween, so keep an eye on our fb page as we share the news!!

AMY: Last question….can you please put my papers back on my desk? I can see them sticking out from under your shirt.