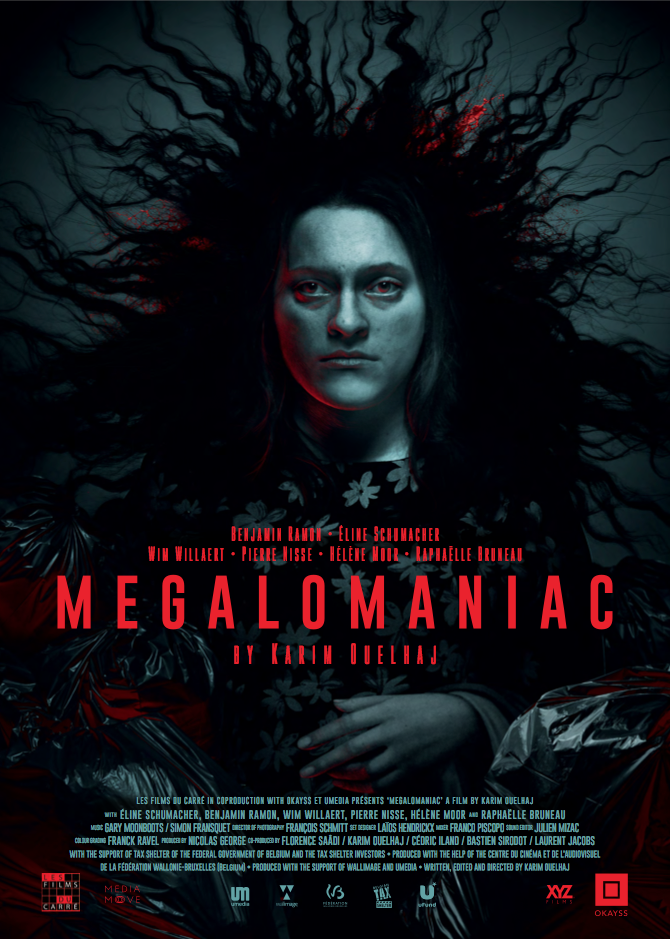 This year marks 25 years of Montreal’s Fantasia International Film Festival. A major event for international and independent genre film. It is a highlight of our year here at Fear Forever, as we love any film that makes us want to cover our eyes- if only we could look away! Such is true for MEGALOMANIAC, a Belgian, french language horror from award winning director and writer Karim Ouelhaj. It screened twice this festival with its director in attendance; when we come out the other side of the festival on the 3rd, I think it will be looked back on as a film that horror fans need to keep a close eye on.

The film is a gripping descent into madness combined with violence that revels in its gritty realism. MEGALOMANIAC leaving its audience disturbed is a given, but the nuanced commentary on gendered assault underlying its horrors makes MEGALOMANIAC worth experiencing.

Martha (Eline Schumacher) and her brother Felix (Benjamin Ramon) are children of “The Butcher”, a notorious serial killer who terrorised the city in the 90s until he suddenly disappeared. Now grown, they live a secluded life in his large home and have also inherited – or perhaps been cursed with – his serial killer compulsions. While Felix carries on the family legacy each night, Martha keeps her head low and endures brutal victimisation at the hands of her factory co-workers. But Martha, whose mind is fractured and increasingly delusional, is also looking forward to joining in with her brother’s work.

MEGALOMANIAC’s grim colour palette and use of confronting hyperviolence are reminiscent of the late 1990’s early 2000s New French Extremity, invoking comparisons in style and content to films such as HIGH TENSION, INSIDE and MARTYRS (which has an eerily similar opening scene). While it conjures up the iconography of past decades, MEGALOMANIAC manages to stand out as inventive. Also, its artistic elements and exploration into themes of psychosis elevate it beyond a straightforward ‘slice and dice’. The film’s supernatural components are downright spooky, but are they, as the film asks, just manifestations of trauma and shame? The special effects and makeup artistry of them are impressive.

The film’s characterisations give it depth beyond its brutality, successfully trapping its audience into a conflict of sympathy for Martha whilst finding her disturbing. We follow from her point of view and feel as though we are complicit in her cruel acts and homicidal fantasies. It’s very emotionally effective. Eline Schumacher embodies brilliantly a character who is complex in her fragmented mental state and duality. MEGALOMANIAC avoids mental health horror cliches and instead submerges you in the task of finding out what is real and what is not. MEGALOMANIAC’s premise of a hereditary compulsion to kill sparks interesting considerations of violence against women, intergenerational trauma, and victimisation being a cycle of perpetuation and projection. It is worth stating again that Schumacher is spectacular.

As Fantasia Fest draws to a close this weekend, we look back at what has stood out to us the most, and MEGALOMANIAC cannot be ignored. In an easily digestible 100 minutes, Karim Ouelhaj has given us an intricate example of processing societal trauma through horror.