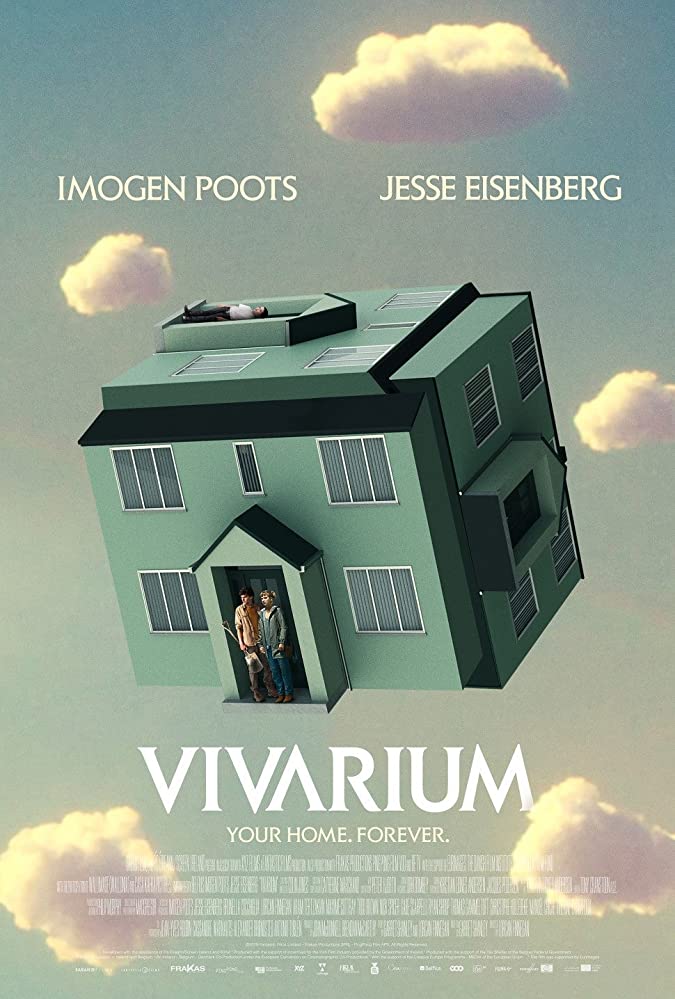 The whole world is living in an indefinite quarantine, locked down in their homes. Collectively, we are all wondering, “when can we go back to a normal life?”. What a felicitous time to watch a film about a couple trapped in a tranquil yet horrific suburbia setting. VIVARIUM is a delightfully strange sci-fi suspense thriller that simply displays and questions the perplexing cycles of life.

Young couple Tom and Gemma  (Jesse Eisenberg and Imogen Poots) are searching for their perfect new digs. The couple is presented with an opportunity to view a home in the “Yonder” community by an unforgettably estranged character, Real Estate agent Martin (Jonathan Aris). Martin has an eccentric and mysterious way of communicating and will leave you thinking “what the fuck?”.   It isn’t long before Gemma and Tom realize the fully furnished home in the neighborhood with never ending identical properties will regrettably be their “forever” home. They drive around Yonder with no cell phone service (yikes)  locked in the suburban vortex to eventually run out of gas and hope. A cardboard box appears with a baby boy inside and instructions that read, “raise the child and be released.”

The baby grows to mimic Gemma and Tom’s gestures and he echoes everything his new “parents” say, do and feel. Scathingly sounds like raising a real child, doesn’t it? Gemma and Tom are essentially lab rats that are being carefully examined/watched by the kid. As the plot develops, the behavior of the characters are straightforward metaphors for life as a wife, husband, parent and home owner. The metaphors are not rocket science. It’s gotta be simple. Human behavior has to be dumbed down for this film.  How else can the director portray this alien boy accurately consuming human life ? Gemma and Tom are like a language the boy is eagerly trying to learn. Anyone can draw the conclusion that the movie is a massive predictable metaphor. Some people will love it for its simplicity (me), others could easily call this unimaginative. They are trapped in a simple home and their resources are limited. Yet the way these metaphors were presented really worked for me.

Jesse Eisenberg as an actor, we all know what to expect. He can play the quirky bro with the clever one liners but then balances it out with intense emotional seriousness when shit goes left. No surprises there.  More importantly, I think the writing and delivery of Gemma’s character need to be noted. She excelled at making the audience feel the frustration and her sympathy creates a brilliant roadway that enables the viewer to truly feel the issues one would be experiencing in a situation like this. Also, Irish child actor Senan Jennings was brilliant as the young boy. As a creature that was exposed to humans for the first time, he was limited in many ways. His whole existence revolves around the idea of monitoring and copying humans. He is a complete blank slate clearly lacking any basic human DNA and his performance was creative and spot on.

So, not to get too Carole Baskin/animal rights activists on you here but the most horrific part of this whole film is the simple fact that we as humans lock animals up all day just to monitor their every move. We supply them with their basic needs, watch them grow, eat, mate and die..  Then we try to justify it for the sake of “research.” Horrific, ain’t it? Almost horrific enough to base a whole film on…

This movie definitely made it clear that I am not the only one on this planet questioning the point of it all. Honestly, I was never the type to really give a fuck about getting married and I’m definitely not making it my life’s goal to have a child. Hell to the naw. That’s not how these commitment issues work. My point is, everyone can relate to this movie.  And if you don’t get anything out of this film hopefully you understand there is more to life than your domestic status, and locking anyone or anything up to monitor and control is bullshit. Happy quarantining everyone! Stay safe.

“VIVARIUM not only has great performances and writing, but is incredibly apropos for our current pandemic climate”