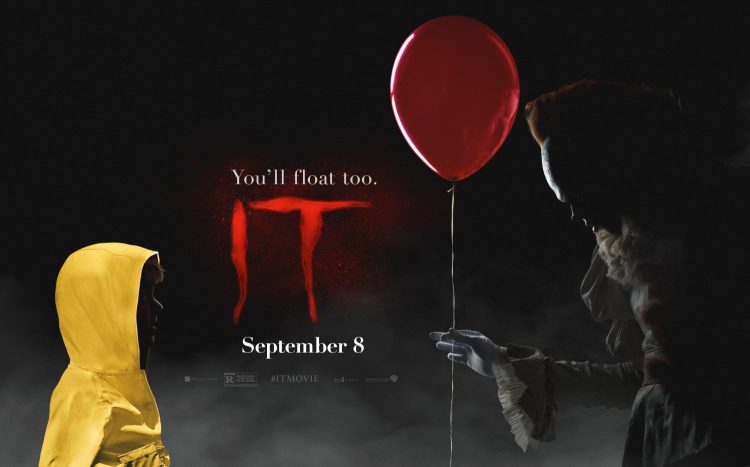 Last June I was fortunate enough to visit the set of IT. I did a multitude of interviews with the cast and crew. I wanted to share the best of what I have with you. Not that any of the interviews were bad, but some things got lost due to too much excitement and it becoming a blur of excited talking and laughter. That’s a good thing though, right?

So today we chat with the rest of “The Loser’s Club” of IT which opens September 8th (but I’m sure you already knew that).

FF: How do you all like working on a Stephen King film?

Jaeden Lieberher (JL): Stephen King is a brilliant author so obviously doing any adaptation of his books is going to be a really fun experience. He does such interesting stories and puts lots of kids in them and they have  good relationships with their friends so its fun.

Finn Wolfhard (FW): I think its hard to do a really, really amazing and to-the-point adaptation of anything. This film is a great adaptation of the book but at the same time it stands alone as a really great movie.

Jack Grazer (JG): I think it’s really really great. This film has a “Stand By Me” type feel and I think that’s a really great thing for the characters and the plot when they are building friendships together to fight a killer clown.  It’s just all about teamwork. 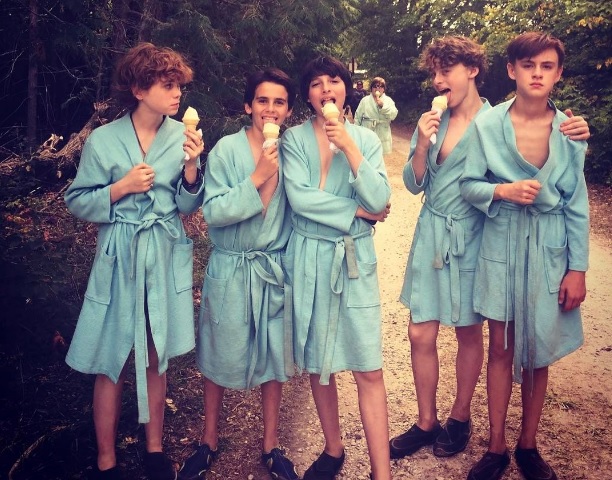 FF: How scary do things get for you and your characters and what was it like shooting those scenes?

FW: I think its like Sophia said, because its definitely unexpected.  It’s completely different from what you read from a script and what actually happens in real life or what it translates to on a movie screen.

FF: Who has gotten up and close with Pennywise the most?

FF: Jack can you tell us what that was like?

JG: It was pretty intense because I got a lot of drool and a lot of bad breath -sorry Bill!- but he’s a really amazing actor to work with. He really gets you into the scene and makes it real for you. Before he even starts the scene he does his little laugh and he walks around making scary noises and screams and he gets into character and its really incredible to work with. 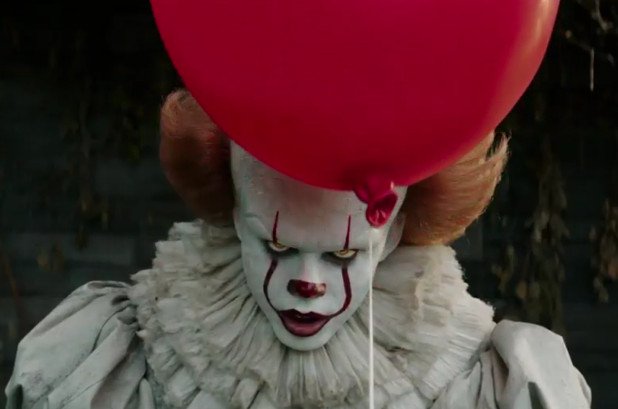 FF: What was your biggest scene with him?

JG: The one where I break my arm. Its just a whole mix of emotions because I don’t know where I am, I just broke my arm  and I wake up and I see an evil clown coming at me out of a refrigerator . I’m having this crazy asthma attack as hes coming towards me and he picks me up and is freaking out!

FW: Jaeden and I were watching because in the scene we just run in so we don’t have much to do with Pennywise . Watching the scene was terrifying and the only thing more terrifying would be to be in the scene itself. You would say that right? (looking at Wyatt)

FW: We were in this hot room and we were watching at the monitors but we could still hear everything. It was just really, really creepy watching from another room.

JL: Hearing everything from afar and then running into this room.

FW: while its already happening!

JL: We know what to expect but when you just run in and you see him already there on the floor and hes looking at you, its pretty terrifying.

FF: Is it a challenge to compartmentalize that and not take it home with you? Does it seep into your dreams/nightmares or anything like that?

JL: I would say its kind of easy to not be scarred by it because there are so many pepople around here .

FW: There are so many people running around here and you know its part of a script but its scary as hell to have that happen to one of your best friends.  Like seeing Jack get drooled on, it was funny for me, but I was horrified.

JG: Its great how Bill stays in character through the entire ride because it really helps me to stay in character. Hes just a really great actor all around.

SL: No matter how many times you see him on the monitor, when you first see him its always a surprise.  Then he starts talking and says ” Oh hi! hey how are you?” just sounding normal .

JG: Yeah and there is a point where he pushes me against a cabinet and he was like “can we get a pillow to put behind Jacks head” 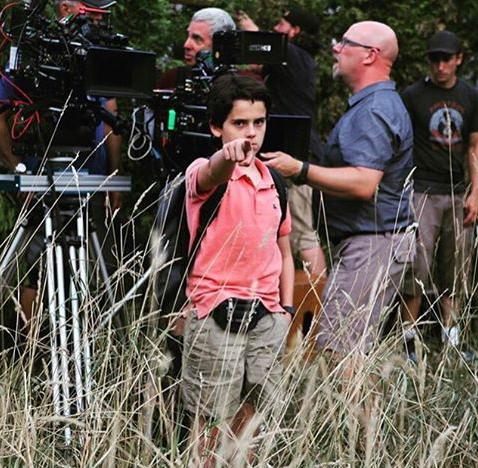 FF: Awe! Thats so sweet. Who would have known that Pennywise has got that paternal instinct! Speaking of which, what did your parents think about you being involved in this project and what was your audition process like?

Wyatt Oleff (WO): I think Finn, Jaeden, Jack and I got the audition a year ago? I was 11, and my mom and I agreed it might not be the best role for me to have then because the script was way different. Then, a year later the script comes back around and my mom said “Now I feel like this script is better for you and you should audition for it again”. This time I didn’t want to do it! But my mom and my manager convinced me to do it and I did and…here I am!

FW: I had also auditioned before and I had gotten the part for Richie. Then the director dropped out and some business stuff happened and it came back around a year later and that was it! I got to audition again.

JL: Yeah the process was pretty long. It was a few auditions and call backs. All of us, except for Wyatt, we all met at the chemistry read where all of us did a few scenes together.

SL: Same thing as them, I auditioned a year ago and got a call back, but then it ended. Andy (Muschietti) and the others saw the self-tapes I did for the last one and decided for me to come do it again. There were three auditions after that and then I finally got the part.

JG: I actually read for Bill (Denbrough) the first time I auditioned.

FW: Immediately Jack and I just clicked.  It was immediately like an Eddie and Richie relationship. We just were like side-by-side instantly and we talked and made this group up. Jaeden was in another group when we met him. Sophia was in our group a couple times.

FW: Oh yeah, Wyatt was in Atlanta shooting something and he got the news there.

FF: What kind of research did you guys have to do. I know one of the characters has a stutter in the book.

JL: It was all Youtube that helped me with the stutter. Watching different videos. It was mostly during the audition process where i really worked on my stutter.

FW:  There’s not much research that goes into Richie. You just have to read the character breakdown and it helps  a lot to see the difference between the characters in the book, and the miniseries, as well to get a raw take on it.  There wasn’t much going into it because I had done it a year before so I already knew who Richie was.

WO: So Stanley, at the beginning of his bar mitzvah, he has to recite some things from the torah. So for my first audition, my brothers friend who had had his bar mitzvah helped me learn to pronounce stuff and sing it. Actually, it really helped I think. They were impressed that I knew it already so that was good.

SL: Well I read the book but because its such a big book I decided to specifically read the moments that Beverly was in and learn about her friendship with all the boys and to get to know her character  and backstory better.  So I tried to see what characteristics we both share and see how we are alike to help me build the character.

JG: I heard about this movie before i even auditioned for it. I heard about how iconic it was and I had heard of Stephen King and everything but I had never watched it.  So when I got the audition I started looking more into IT.

FW: Going back to Wyatt’s whole Torah speech, that was originally written for Richie.  It was weird because in the original auditions I did all the Torah lines. So I did the whole speech and got the part but then they changed who says the speech. I guess they wanted to see if my acting abilities could go into speeches and stuff.

FF: You guys are called “The Losers Club” but really, you guys are the heroes in the book. So can you talk about the bond your characters have and why you stick together throughout all of this?

JL: In the beginning of the movie you really see how they are losers. You see them at school, you see them against the bullies. I guess when you see them fighting Pennywise you won’t see them as losers anymore but its the “losers” title that keeps them together.

FW: I think the whole “losers” bond is strong.  Stanley, Bill, Eddie and everyone were friends before Bills younger brother Georgie died but I think that brought everyone closer together. We were comforting Bill and they want to do something about it.

SL: It’s really interesting to see the relationship they have before. Each of them are outsiders and they all have different backstories, different ways they connect with others, and they see how much they have in common.  They get together even though they are all outsiders and losers and its stronger than any other bond they have seen.

WO: It starts out really with the four of them who have known each other for a long time.  People call us “losers” because technically we are actual losers! we have no friends! That’s part of the reason we stick together is we have nobody else!

FW: Yeah we are really scraping the bottom of the barrel!

WO: Yeah that’s basically how they form. They become best friends and take down a supernatural, weird, clown-demon and it’s great.

JG: I feel like its actually a triumph for the losers because, yeah they are losers, but then its kind of incredible to see them fight a demon-clown. I think its empowering for the audience. It’s a story of will power and team work.