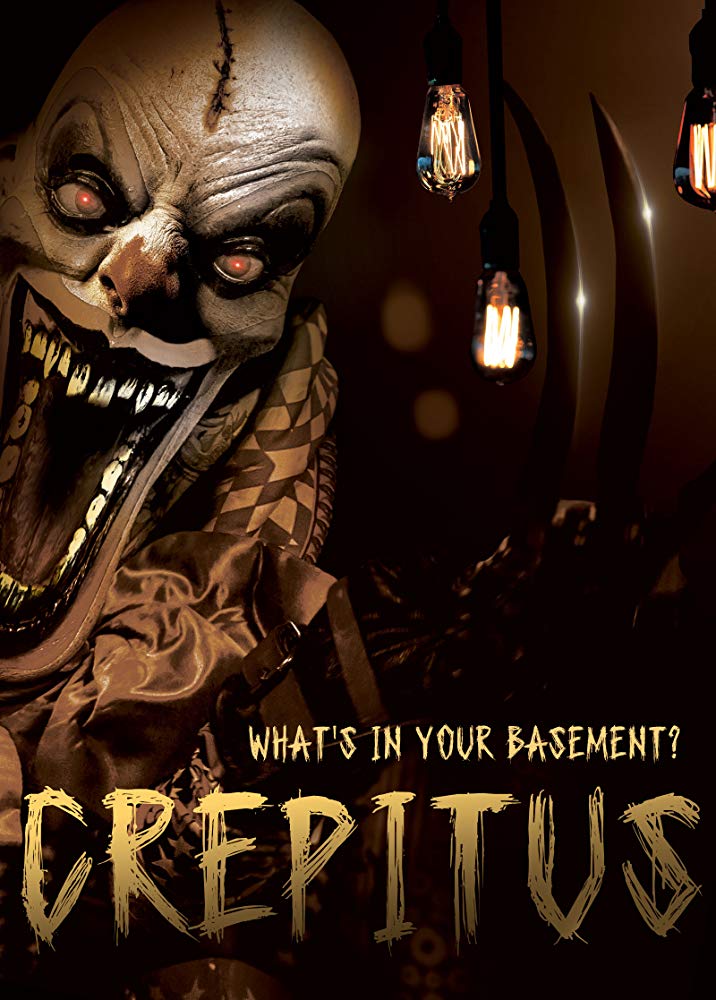 Every now and then you hear something about a promising horror film, and then it seems to take an eternity for that film to see the light of day. CREPITUS is one of those films. I remember hearing some rumblings on the internet way back in 2017, and then I remember finally seeing the trailer make its debut in early 2018. CREPITUS had been covered by numerous media outlets, and even some mainstream publications like ENTERTAINMENT WEEKLY. Finally after years of rumors and teasers, CREPITUS finally hit DVD and VOD on December 13th.  However, it is worth noting that this reviewer found the film to be a massive disappointment, and frankly I found it to be damn near unwatchable.

Cashing in on the recent trend of creepy clown features (IT, TERRIFIER), CREPITUS attempts to throw another sinister jester into the fray. I remember when I saw the trailer back in 2018 with a monochromatic Bill Moseley stepping into the role of the cannibalistic clown, I got a little excited. Bill looked the part, and who doesn’t love a good murder clown? Well over a year later I can tell you that while Moseley adequately fills the shoes of this demonic presence known as Crepitus, it isn’t enough to save the film from itself.

CREPITUS opens with nursery rhyme of sorts, about marking children with an “X” in order to eat them when they’re ripe. This rhyme plays heavily into the finished product, but doesn’t help a narrative I found rambling and more than a little incoherent. We are immediately introduced to a pair of sisters named Sam and Eli (Chalet Lizette Brannan and Caitlin Williams). Eli is quite a few years older than Sam, and acts as a de-facto guardian due to the fact that their mother Brandi (Eve Mauro) is a drunk and abusive trainwreck of a human being. Both sisters have an “X” prominently carved into their foreheads, that obviously symbolizes the “X” from the nursery rhyme in the opening credits. One of the first noticeable problems with the film is with the “X’s” themselves. They appear to change in both shape and deepness many times as the film goes on, and sometimes even the location of the “X” on their foreheads seems to move around as the film progresses…but I digress. The attention to detail here is the least of the problems plaguing CREPITUS.

The girls seem to be imprisoned in this house that used to be their grandfathers. I say this because it felt like  99% of the film takes place within the dilapidated walls of this home. When the girls aren’t cleaning up after their drunk mother, or cooking her food that they have to watch her disgustingly eat, they spend almost all of their time in a bedroom that they share. Little by little the girls start to hear noises in the walls and Sam begins to see a ghostly apparition from time to time in the bathroom. The whole film is segued by Bill Moseley annoyingly reciting nursery rhymes seemingly at random, although I am aware that this was an attempt to add exposition to the already incomprehensible narrative. His rhymes are done as a voice over in an effort to punctuate or add emphasis to what is taking place on screen.

Sam later finds a GoPro in an old box of her father’s belongings that she decides to wear everywhere in order to document what she’s been seeing. This seems to kick things into a supernatural high-gear, although I’m not sure that this particular camera ever actually comes into play in the grand scheme of things. The film starts to build towards a revelation about the cyclical nature of child abuse, and that there is literally a demonic reason for all of the abuse that these young ladies are forced to endure. The big “reveal” moment in act three when Sam uncovers some old film reels and a scrapbook in the attic is an attempt to make sense of what CREPITUS wants, and why the girls are the constant objects of their mothers hatred. For me, this was too little too late, and a moment that I literally rolled my eyes.

The constant abuse, degradation, and strange occurrences in the house seem to take up roughly ¾ of the film before CREPITUS even rears his ugly head. I will say that Bill Moseley’s turn as the evil clown isn’t bad. His make-up is good and he looks the part, but his character only speaks in rhyme form which is jarring and well…pretty hokey. I know I’ll get a rash of shit for saying this, but I’m not the biggest fan of Bill Moseley’s acting even under the best of circumstances. I find his acting to be very one note, and he does very little to elevate the film in any way. In fact, I’m more curious about how he got involved in CREPITUS in the first place, considering that in the world of horror he’s a household name! CREPITUS certainly didn’t do anything to elevate his stock. All of the acting on display here is pretty sub-par, but I’m not sure if it’s actually the acting, or the script, or the directing, etc.

In short, unless you’re a Bill Moseley super fan or an evil clown super fan, I sincerely doubt there’s much for most horror fans to enjoy. I struggled staying engaged (and quite frankly AWAKE) for the meager 83 minute runtime. I take no pleasure in writing bad reviews, but I judge every film on the criteria of whether or not I’d pay to see it…suffice to say in this instance I would not. In this day and age of media over saturation, there’s no shortage of quality films to watch. It saddens me to report that after such an excruciatingly long gestation period, CREPITUS is not worth your time.

“Not even Bill Moseley can save CREPITUS from itself.”