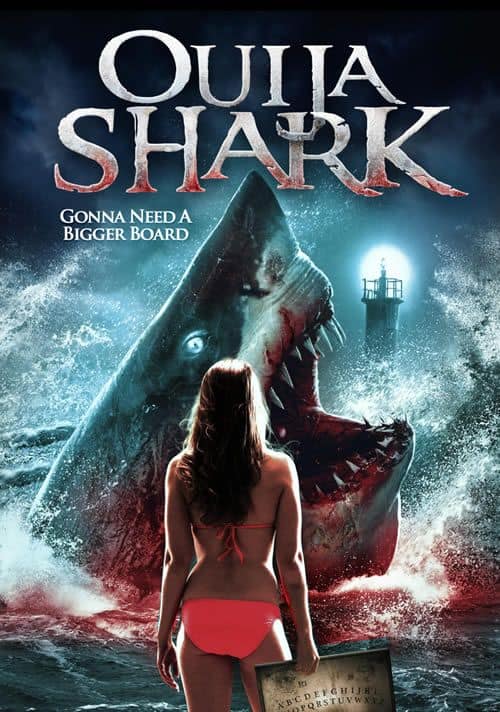 I had the exquisite pleasure of attending (prior to the COVID-19 pandemic) the world premiere of OUIJA SHARK at Toronto’s oldest and most run down theatre, The Grand Gerrard. I had no prior information about this film other than it’s title and poster but that was more than enough to convince me to take the plunge.

Although the director is credited as Scott Patrick, his real name is Brett Kelly, and he explained after the screening that he uses the pseudonym to give him the option to distance himself from his extremely low budget films, if need be. With almost 40 films under his belt, Brett Kelly might be a hidden gem for fans of “Best of the Worst” style films.

Having had no knowledge of Brett Kelly’s caliber of film making beforehand, I was immediately thrown off by the extremely low quality. The film was shot on a budget of $300 CAD ( $216 USD), a prop shark taking up the majority of the costs, at 200 bucks. Most of the actors worked in exchange for exposure as Brett Kelly’s films have gained worldwide audiences and thousands of views on streaming services such as Amazon Prime and Tubi.

OUIJA SHARK follows 5 young women on a getaway who accidentally stumble upon a Ouija board and summon the vengeful spirit of a great white shark. This outlandish concept is not too far fetched for the director who has previously released the films “SHE-REX,” “JURASSIC SHARK” and “RAIDERS OF THE LOST SHARK.”

The film was shot in 2 locations: a public park and the backyard of a suburban home. There is hardly any attention to set design, as public washrooms and paved paths make their way into shots that are supposed to reflect deep woods horror films like THE EVIL DEAD or FRIDAY THE 13TH. Kelly admitted after the screening that the film was originally intended to be shot in a cabin in the woods or in a location closer to a beach, but due to unfortunate circumstances had to be moved to a suburban house.

The film starts off with a lengthy opening title sequence, a technique usually used to stretch out run times for films that fall short of the average 90 minute feature film length. In OUIJA SHARK’s case, even with the extremely long credits book-ending the film, it still only clocks in at 1 hour and 7 minutes. This feels like the right length though, as any longer and the charm might have begun to wear off.

So, is OUIJA SHARK a complete waste of your time? Well, yes. But maybe it’s best rephrased: OUIJA SHARK is a great way to waste your time. Lines like, “Is it a ghost? Or is it a shark?” “I think it’s a ghost shark,” delivered in the most emotionless and monotone voices from two young and inexperienced actors will surely leave you in stitches. Other actors seem to be intentionally hamming up the acting, such as John Migliore, who, I might add, is the crown jewel of the film. The shark itself… Oh My God… Although it cost 200 dollars to make and was custom built for the film, it looks like a toy straight out of Dollarama (Canadian Dollar Store). It shows up throughout the film as a semi transparent overlay which during the premiere caused the entire crowd to roar with laughter. The blood and gore are to a minimum, most likely due to budgetary constraints.  While having such poor quality attributes would usually do a major disservice to a film, in OUIJA SHARK’s case, it actually makes everything cohesive as well as making everything relatable especially from a filmmaker’s standpoint. Its low budget aspects are filled with esoteric appeal and the acting is so bad that seldom would even think it possible, but every audience member was invested from start to fin.

While following a conventional horror premise, there is nothing particularly scary about OUIJA SHARK, in fact, the biggest takeaway from this film was the knowledge of Brett Kelly’s existence. In the days following the screening, I took it upon myself to delve into his filmography. I watched two of his more recent efforts, the survival horror “COUNTRYCIDE,” and crime noir “MURDER IN HIGH HEELS,” both of which had a bigger budget than OUIJA SHARK, and felt as though they were designed to be taken more seriously. Oh, and he directed a film starring Peter Fonda and Kevin Sorbo called “JESSE JAMES : LAWMAN” which is free to stream/watch on Tubi. Whether this man is making intentional camp or intentional drama/horror, his films always have the signature stamp of Brett Kelly. It’s like knock off brand snacks… they still kinda do the trick but they leave a weird taste in your mouth. I am looking forward to journeying further down the Brett Kelly rabbit hole.

OUIJA SHARK is available for purchase on DVD on Amazon today!

“OUIJA SHARK is a great way to waste your time”