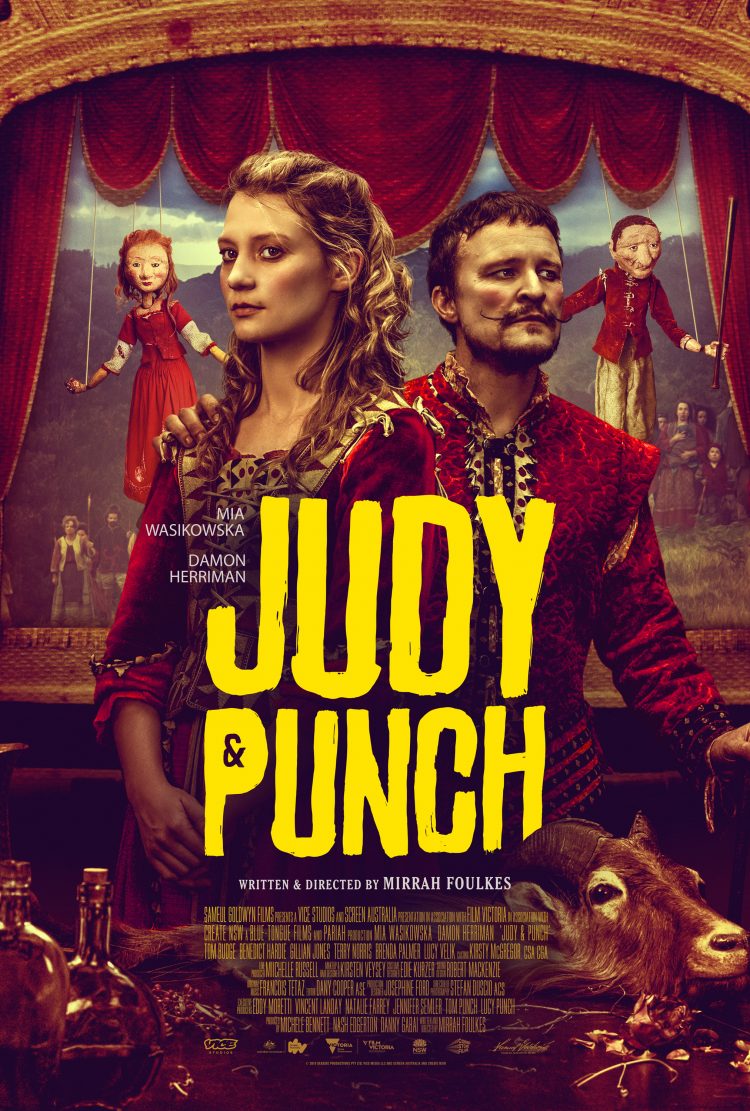 After debuting at Sundance last year and making waves at major Australian film festivals and Montreal’s Fantasia Fest, Mirrah Foulkes’ revenge drama gets Canadian distribution on June 5. A film which reinvents the classic slapstick puppet show as a Shakespearean tragicomedy. JUDY & PUNCH has the whimsical quality of a Brothers Grimm fairy tale of comeuppance and righteous vengeance. Though the film has no supernatural elements, there is no doubt it has something magical about it.

It is the mid-1600’s and puppeteering husband and wife Judy & Punch make their money by putting on elaborate and barbaric puppet shows for a small, prejudiced and superstitious town. They hope to get picked up by talent scouts and move to the city to make it big, but Punch is just as rowdy and brutal as his marionette counterpart. When his destructive antics cause a tragedy he can never come back from, Judy becomes intent on paying him back for his crimes.

Foulkes, who is also the film’s writer, brings us the concept of the seaside Punch and Judy shows from a female perspective on violence against women, making you realise just how disturbing the kid-oriented pantomime really is. Foulkes adapts it so well that it is almost as if the nearly 400-year-old puppet show was based on her story and not the other way around. The story also has a seamless and creative translation of the shows other characters- The Constable, Toby the Dog and even The Crocodile. Foulkes directs a film concept that could have been gimmicky and pandering, but instead is moving and socially relevant. As such, JUDY AND PUNCH is a most delightfully clever film.

For all of the dark subject matter and horrible violence, JUDY AND PUNCH is as much a comedy as a gritty drama. Its social satire is just nuanced enough that it elicits its intended reaction while still letting the film’s heavy moments carry their weight. This balance between genres is well crafted. For example, one moment we are watching a witchfinder general spout amusingly absurd evidence of witchcraft, the next we are witnessing women being horrifically stoned to death.

Were I to have one criticism of JUDY AND PUNCH, it would be that perhaps its message about social acceptance was a bit contrived at times. Those seeking either a laugh out loud comedy or revenge fantasy may be disappointed. But those going in with an open mind and an ability to see how one can complement the other are sure to appreciate this film.

Damon Herriman (ONCE UPON A TIME IN HOLLYWOOD) and Mia Wasikowska (ALICE IN WONDERLAND) do well in their titular roles. Herriman, like a lot of his other performances, brings menace in the characters dark side while also successfully playing the fool. Though Wasikowska’s role is not as funny as Herriman’s, she balances his with her sincerity which reflects the film’s genre duality. JUDY AND PUNCH would not nearly have worked so well without the often comedic and sometimes poignant additions from the ensemble cast, most notably Terri Norris, Tom Budge and Lucy Velik.

JUDY AND PUNCH is available to watch in the US and Canada on Apple TV and iTunes, as well as some other VOD platforms.

“JUDY & PUNCH is a wholly unique film that seamlessly instills both whimsy and horror in its audience.”