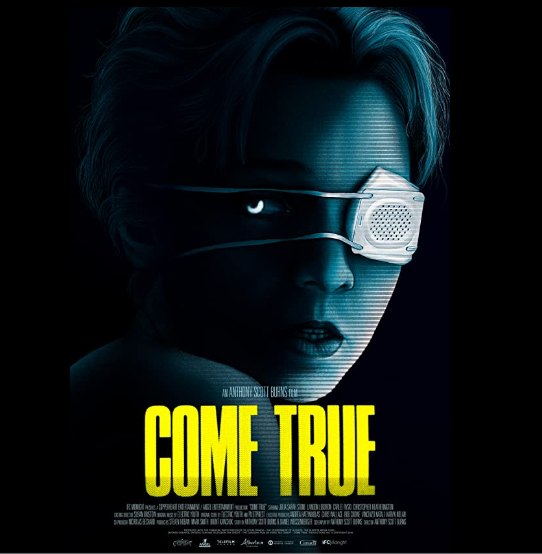 Canadian Anthony Scott Burns‘ latest film COME TRUE is a hallucinatory Sci-fi horror exploring one of man’s final frontiers- the unknown corners of REM sleep. The film is out now on VOD but is also in cinemas in the U.S and if any indie horror is made for the big screen, COME TRUE is it. Awash in the neon blue tint of perpetual twilight, it’s visually reminiscent of other genre-buddies such as IT FOLLOWS with an added blend of unreality. While the director’s previous film, OUR HOUSE, was a cool mix of technology and the supernatural, COME TRUE is on a whole other level.

Runaway teen Sarah (a fresh-faced and talented Julia Sarah Stone) enters a mysterious university sleep study she hopes may help her make sense of the dark dreams she is troubled by and her constant exhaustion. Yes, the study stops her from sleeping in parks or crashing at friends’ places, but it also seems to worsen her parasomnias and waking anxiety. The figure in her dreams starts to seem more omnipresent than she or the researchers realize.

We know Sarah has a reason to be terrified because we get to see her nightmares too. COME TRUE reveals them to us in utterly mesmerizing CGI sequences devoid of the rest of the film’s fluorescent lighting. The film opens with one of these, and we are propelled forward along an endless path lined with floating bodies or monolithic structures. Over and over throughout the film, we are helplessly pulled towards a central figure whose menace is drawn out as each time we are taken into wakefulness before seeing his face. Like a bad acid trip that is stripped of all its colors, these parts of the film are psychedelic yet haunting.

Each time Sarah wakes up in a panic, so do we and the relief she feels that it’s only a dream quickly settles into a need to solve the mystery of it all. The film has a Lynchian quality to it- the questions it raises and the clues it gives us only serve to pull us further in. But this is never frustrating; rather, COME TRUE will have you enthralled as you chew over what it all could mean.

The film’s score is just as stunning as its visuals and is my favorite thing about it. It features original music from a collaboration between PilotPriest (who also happens to be Anthony Scott Burns) and synth-pop duo Electric Youth. COME TRUE’s original soundtrack is well worth a Spotify play for those who are fans of transporting into a phantasmic Neo-noir, and honestly, who isn’t? You can tell the film is built around its score, but this is not a case of a great soundtrack at the expense of the rest of the film. Everything works together perfectly.

The ending is a bold move, but it’s an absolute killer, just like everything else in the film. COME TRUE sounds and looks incredible, and I’m awarding it FEAR FOREVER’s first perfect score of the year!

COME TRUE is available On Demand from IFC Films and distributed in Canada through Raven Banner Entertainment.

“COME TRUE is a hallucinatory Sci-fi horror exploring one of man’s final frontiers- the unknown corners of REM sleep.”