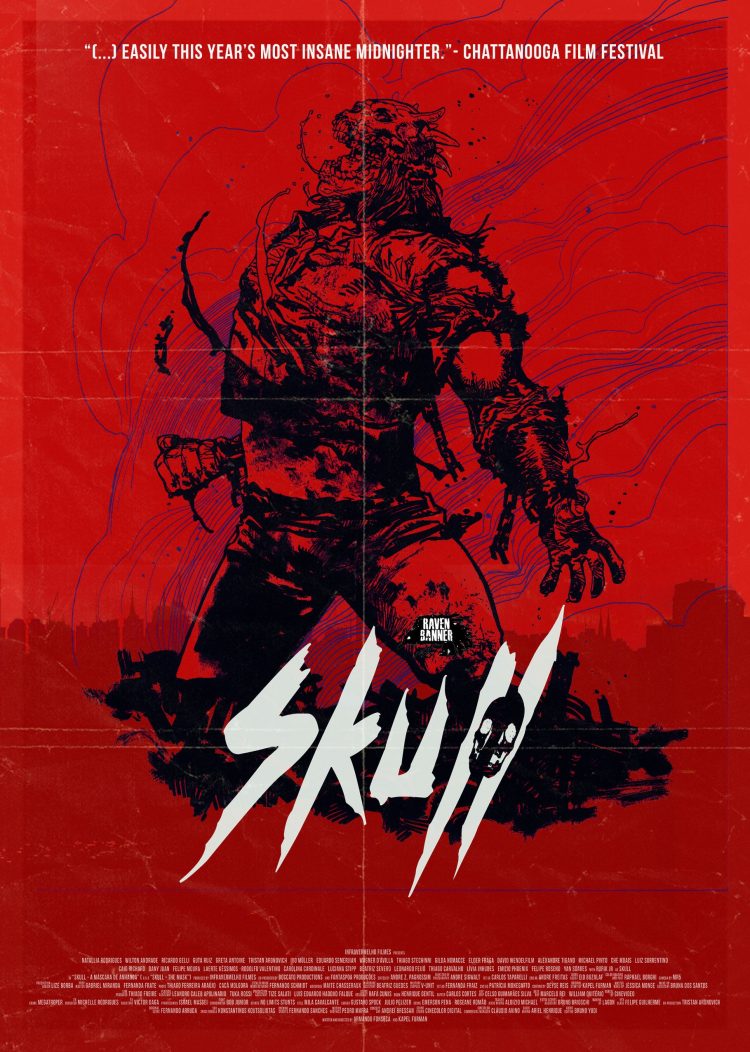 This weekend (May 22-25) the 2020 iteration of the Chattanooga Film Festival kicks off. Like so many other film fests in this unprecedented time of Covid-19, CFF has also taken to the internet hosting virtual screenings of all of it’s films this year. You can help support independent films and film fests by purchasing a badge. The festival is open to residents of The United States only, and that fest badges can be purchased at www.chattfilmfest.org/badges.

Fellow gore-hounds rejoice! There is a new kid in town, and it goes by the name SKULL: THE MASK. Hailing from Brazil by Infravermelho Filmes, co-produced by Fantaspoa Produções and Boccato Productions, SKULL: THE MASK will see state-side distribution by Raven Banner Entertainment later this year. If you’re like me, and you love blood and gore, do yourself a favor and get yourself a pass to see this film (link). It’s an absolute blood-bath with a healthy dose of folklore and mysticism to boot. I thoroughly enjoyed this little bit of gory escapism, but it isn’t for all tastes.

SKULL: THE MASK starts off in a very INDIANA JONES way, complete with Nazi’s, treasure, and underground bunkers. These Nazi doctors have unearthed a skull mask (hence the title) reported to be able to summon the bloodthirsty primitive God Tahawantinsupay, or “the entrail collector of the four worlds”. Before this God can be summoned however, the mask must find a human host to become “Anhanga”…basically the God’s homicidal henchman on earth. With each vicious kill, the blood sacrifice brings Tahawantinsupay one step closer to raining down hell on earth. Let the games begin!

As you can imagine, this initial Nazi experiment goes horribly wrong. Killing everyone and everything within its reach, mostly via head explosions and a few hearts being ripped out along the way. Jump ahead to the present day, and an archaeological digging crew has once again unearthed the mask. It’s here that a representative (Guta Ruiz) of a shady multi-national corporation has come to collect the artifact. Upon returning home with the mask, she tells her girlfriend NOT TO OPEN THE BOX! It’s headed to its final destination in the morning. Of course, not only does the girlfriend open the damn box, she surrounds the mask with candles and performs some type of blood ritual on it… Not typically the recommended protocol with possessed items from my experience. Without any delay, she’s immediately whisked into a hallucinatory fever-dream where she sees Tahawantinsupay just long enough to be thrust into a pool of blood, complete with a demon bursting through her chest. The next morning, both women are found brutally murdered with their hearts torn from their chests.

Detective Beatriz (Natallia Rodrigues) is assigned to the case, and she’s immediately approached by a man named Tack (Ivo Müller). Tack is the head of the organization looking for the artifact. He tries to enlist Beatriz to do his bidding, but she isn’t interested in finding the mask, she’s interested in solving murders. Meanwhile across town, a laborer named Manco (Wilton Andrade) knows something is wrong. His family has been in charge of keeping the demon at bay for centuries. He possesses a severed hand that moves erratically when Anhanga is summoned. He attempts to enlist a local priest familiar with the legends, but he’s all but tossed out as a lunatic. The only problem is that the priest and his church possesses the artifacts necessary to destroy the demon, and Manco is the only one that knows how to use them.

What follows is a convergence of all of these stories in an attempt to conquer or control the demon. Everyone has different motives and very different ideas on how this is all going to play out. After the mask finds its human host, all bets are off. There is going to be a lot of carnage. Each kill performed, cuts to an artifact filling up with blood. Presumably, once there’s enough blood, the big boss demon is going to be reborn.

At times SKULL: THE MASK is like an evil, blood-drenched version of…THE MASK. Yes, that THE MASK. Only in terms of the mask turning a human host into something else. Most other times I would put it closer to the films of the Japanese splatter-punk movement like TOKYO GORE POLICE or MEATBALL MACHINE. However, it never goes full splatter punk, attempting to keep some shred of reality, which this writer very much appreciated. There were plenty of outlandish gore devices, but it never went to the lengths of the above mentioned films. Anhanga himself is something more like Jason Voorhees, an unstoppable force that can walk faster than Usain Bolt can run. If you’re anywhere near him, you’re fucked!

Brazil has never really been a hotbed of activity for the horror genre, but the films it does produce can definitely be classified on the extreme side…or at least in my experience. Aside from the films of Coffin Joe or Dennison Remalho, I can’t really think of any other horror films from here. That being said, those gentlemen are pioneers of the genre in their country, and I’m a big fan of both of them. I’m happy to report that SKULL: THE MASK follows in that extreme tradition, and hopefully will shed new light on horror films below the equator

It was obvious that the film was on the lower budget side, but it was also apparent that no one seemed to let that get in their way. The production design and cinematography were quite exceptional, the creature design was fun and innovative, and all the actors took their roles seriously. It showed. Credit should be given to co-directors Armando Fonseca & Kapel Furman. What easily could’ve gotten silly or corny, never really does. It walks on a razor thin line that may be too thin for some viewers, but wasn’t for me. It looks like this is the beginning of their careers into the feature film arena, and quite frankly I think they’ve got a bright future. The conclusion of SKULL: THE MASK alludes to the fact that there are other masks and demonic artifacts out there…I’d certainly be interested in seeing where else this story could take us. I’d also be interested in seeing what other ideas this directing duo may have in store. The ball is in your court, but you’ve definitely got my attention.

“SKULL: THE MASK is an absolute blood-bath with a healthy dose of folklore and mysticism”