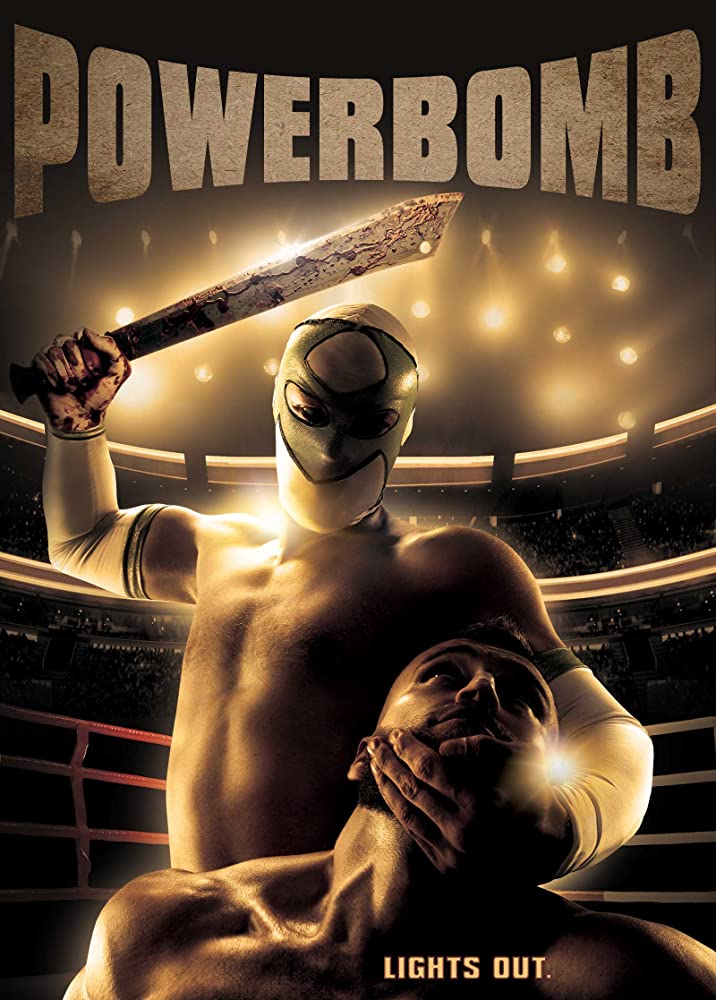 During these weird quarantine times, a lot of different movies have been popping up in my inbox. Not all of them are horror films, but almost all of them have a darker tone about them. One such movie that wasn’t even on my radar was the pro-wrestling melodrama POWERBOMB. Sure it was low budget and had a distinct DIY feel to it, but it also (surprisingly) had a lot of heart and some interesting insights into the phenomenon of “local” wrestling promotions with a dash of kidnapping for good measure.

By the sound of that, you may be thinking this film might be akin to something like THE WRESTLER, which it truly is for the first act. The film starts out as an intimate behind-the-scenes look at a slightly over the hill, up and comer Matt Cross (Matt Capiccioni). It’s obvious that the guy has talent, and he’s definitely been around the block a few times. We see him traversing the local fans, shady promoters, and even shadier managers. This is how Matt makes ends meet. He knows he’s being ripped off at every turn, but he sticks it out in pursuit of his dream. These were actually my favorite parts of the movie, the sacrifices people make in the pursuit of glory. However, it ends up devolving into something more along the lines of BIG FAN, or even more closely to the intensely maligned 2019 Fred Durst/John Travolta film THE FANATIC.

Now, that comparison isn’t automatically a bad thing. There were parts of THE FANATIC that I really enjoyed. However, my issue with POWERBOMB is that it really feels like the tale of two movies. Shortly after Matt leaves his latest wrestling match, an overzealous fan pushes Matt to his limit causing the wrestler to lash out. Moments later, Matt is drugged and stuffed into the back of the fans car. Matt wakes up to find himself chained to the wall in Paul’s (Wes Allen) basement. Paul is a superfan of Matt, but he’s also disturbed and delusional. His bedroom is covered in wrestling memorabilia and nude photos of women. It’s also littered with food remnants and he talks to himself constantly almost like he’s narrating his own life. He thinks he’s helping Matt to “train” for “the big show”. While drinking generic cola by the liter.

All the while, as this is unfolding, we are cutting back to Matt’s wife Amy (Roni Jonah) and their son Cash (Cash K. Allen). Amy used to be an accomplished local wrestler in her own right, but she’s given up that dream so that Matt can pursue his. She’s also working long hours to pay the bills and raise Cash. Many, including Paul, blame Amy for Matt’s downward slide as of late, but few actually understand their plight. It’s back to the real life struggle of following your dreams, when we cut back to Paul and his “training” methods. It seems less like training and more like therapy as Paul gets Matt to divulge all sorts of information ranging from his abusive father, to his struggling marriage. It never quite goes the torture-porn route, although at times it treads very close. Paul enjoys tormenting Matt just a little too much.

Honestly, I wish the film was more about Matt and Amy, and less about Paul kidnapping Matt. That part of the story was just anticlimactic and cheapened the realness of Matt’s struggles. Although there is a third act revelation explaining Paul’s actions a little better, it just felt forced…like it was only there to add some sinister elements to an otherwise very human story. It’s also probably why the film ended up in my inbox with some “horror” elements put in for dramatic effect. It just wasn’t necessary.

POWERBOMB is definitely worth a watch. As someone who is almost totally ignorant to the world of pro-wrestling, I found it interesting. Sure, I watched some WWF in the 80’s, but it was just something that was always lost on me. I understand that Matt Cross and Roni Jonah do in fact have real-life wrestling pedigrees, so it’s entirely possible you may want to watch just to see them outside of the ring…. Sort of. It was insightful, and at times touching with an almost verite vibe with regard to wrestling culture. The horror angle, however, was a swing and a miss. Forgive my mixed sports analogies….I’m a film guy after all.

POWERBOMB is available on VOD and DVD from INDICAN PICTURES now!

“POWERBOMB offers some interesting insights into the phenomenon of “local” wrestling with a dash of kidnapping for good measure.”