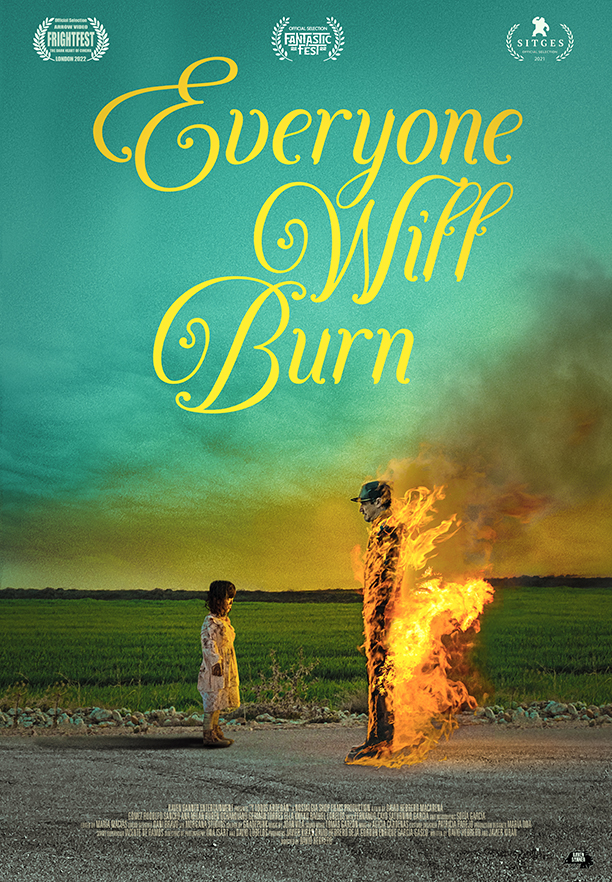 As one of the largest film festivals dedicated to horror, FANTASTIC FEST and its focus on new filmmakers from around the world, has this year brought us Spanish religious horror EVERYONE WILL BURN (Y TODOS ARDERÁN) from director and writer David Hebrero, and it is as gloriously chaotic as its title suggests. It had its North American premiere at Fantastic Fest, and if ticket holders for the festival’s virtual edition, which has just started, don’t use them on this film, they miss one of the best indie horror gems of the year.

EVERYONE WILL BURN initially comes across as a bizarre yet highly engrossing cross between THE OMEN and FIRESTARTER. But also is, in fact, an original and exciting take on the “second coming of the antichrist” trope that deserves to be witnessed by every horror fan. It’s an eccentric film that not only has killer pyrotechnics but deals with poignant topics such as loss, grief, ableism, revenge and religious zealotry. A new take on small town “hillbillies”,.as the film calls them, makes the sharpening of pitchforks feel a little too familiar.

Still consumed by grief at the death of her son many years earlier and stuck in a gossiping, small town with the locals she blames for it- María José has given up. As she stands on the edge of a bridge, a child covered in mud appears at her side, calling her mother. After a gruesome run-in with the police, she takes the child home and quickly forms a parental attachment. However, the girl’s arrival in town comes with supernatural events and disturbing deaths, and the town becomes convinced she is the manifestation of an apocalyptic urban legend.

The town’s corruption does not reflect its stunning setting in Madrid and Ávila, Spain, which makes the film look like it will become a western at any second. The buildings are so beautiful and also add to the film’s commentary on fanatical catholicism.

EVERYONE WILL BURN revolves around an appropriately unhinged but sympathetic performance from Macarena Gómez (DAGON and this year’s LA PIETÁ). This woman is an absolute irreplaceable asset to Spanish horror and just the genre overall. The film and Sofía García’s character and performance as the ‘evil child’ avoid cliche.

EVERYONE WILL BURN should appeal to those who love a cool supernatural religious-horror film but are bored by the flood of them on streaming services. If you’ve lost your faith in the subgenre because of Netflix’s banal satanic paint by numbers, EVERYONE WILL BURN could restore it. EVERYONE WILL BURN screens at Fantastic Fest’s virtual edition until October 4.

“An original and exciting take on the “second coming of the antichrist” trope that deserves to be witnessed by every horror fan.”