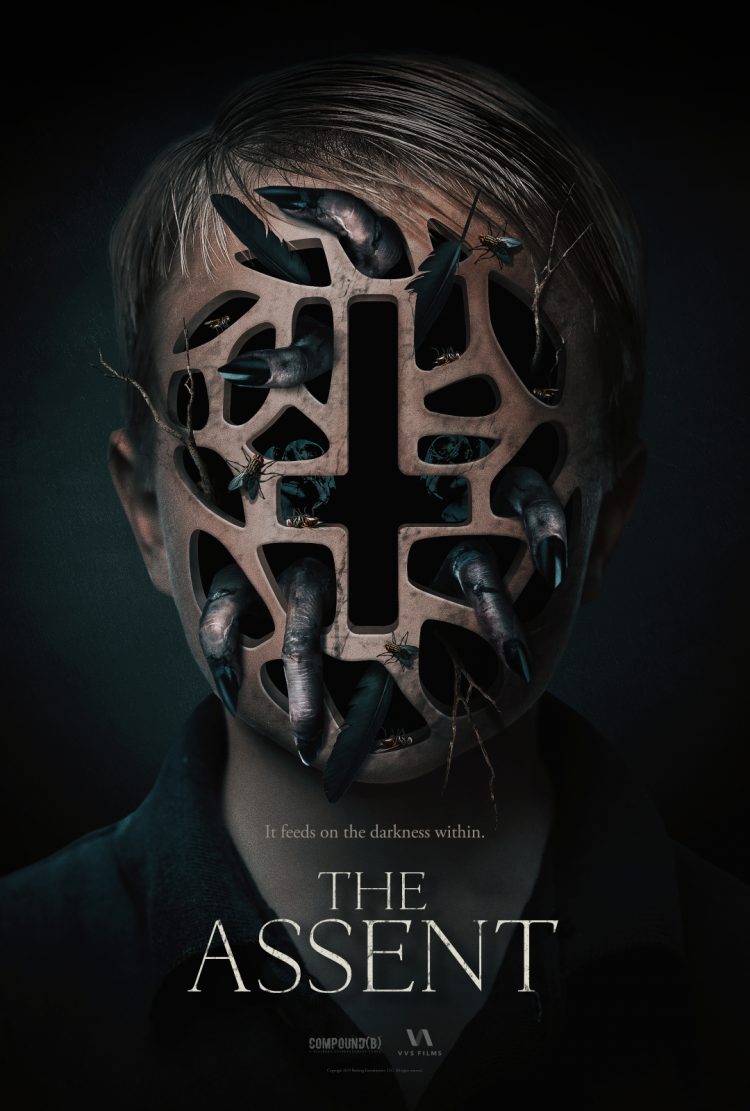 THE ASSENT amassed quite a lot of interest after its creepy poster and trailer were unveiled. As goes with most films, you have to exercise some degree of caution when looking at a film’s promotional materials as they can be misleading.

The movie that was dubbed “the scariest film at THE TORONTO AFTER DARK FILM FESTIVAL” was mildly entertaining. Unfortunately, this film is destined to be lost in the sea of forgettable possession movies on Netflix.

The film starts off with a found footage segment of an exorcism where a young boy is having a demon banished by a priest. The usual exorcism commotion ensues with the child writhing about and resisting restraint. A voice over explains the films title. Apparently there are 3 stages to possession: 1) The Presence 2) The Affliction 3) The Assent. The Assent refers to the point at which a demon bonds with its host’s soul, making it practically impossible for the separation of the two. This was probably the most interesting aspect of the film as it’s a fresh take on the possession lore that does make for a terrifying premise.

After the title screen comes and goes we are introduced to our lead character, a man named Joel played by Robert Kazinsky (WARCRAFT: THE BEGINNING, PACIFIC RIM) who inexplicably lives in a house filled with gothic knick knacks, pictures of demons and monsters on his walls, and graffiti sprayed furniture. We learn that Joel is trying to put his life back together in the wake of his wife’s death in an automobile accident. At the same time, Joel is constantly struggling with his schizophrenia as well as financially and emotionally caring for his son, Mason (played by Caden Dragomer). It’s clear that Joel is not in a comfortable position in life as he is barely making end’s meet and is having hallucinations due to his mental illness. The film attempts to establish Joel and Mason’s relationship but the actors are unable to perform well enough to make it believable. It’s actually quite astounding how god awful these two actors are on screen together. Caden Dragomer comes across stiffer and more unsure than Jake Lloyd did as Anakin in STAR WARS EPISODE 1. He looks like he’s about 10 or 11 years old yet talks like an infant. His L’s turn to W’s as he says things like, “Daddy… I can’t sweep” or “I wuve you Daddy.” Kazinsky is not much better as he says and does silly things to be a likeable dad. It’s all very hard to watch. Just when you think the acting can’t possibly get any worse, Douglas Spain steps into the movie as Brother Michael. It feels like Douglas Spain has never acted before. There are moments of pause after his line deliveries that feel like the rest of the cast is waiting for the director to call cut, but they just keep rolling and it’s awkward AF.

The effects in the film are handled pretty well. There is a lot of CGI implemented in the creature designs and they strongly resemble the monsters from SILENT HILL. Because of the CGI, they limit the monsters to quick flashes and are only on screen for a few frames at a time. It’s reminiscent of films from the late 90’s and early 2000’s that would have quick cuts to twitching monsters like THE HOUSE ON HAUNTED HILL or THIR13EN GHOSTS. THE ASSENT uses an RGB split effect pretty non-sparingly throughout the film and it gets old real quick.

The film is shot well and looks like a proper Hollywood film, but the story and acting are at a student film level. Possession/exorcism films have been done to death, with the only exorcism film to receive immense critical praise being THE EXORCIST, and that was made almost 50 years ago and is still nested firmly atop the rest. Now that we have seen the story so many times, and given the decline of emphasis put into religion in today’s society, it begs the question, “What is even the point?”

The film did touch upon some interesting historical facts that pertained to mental health conditions being directly linked to demonic possession in the past, but they neglected to expand upon it.

As a low budget feature I have to be somewhat lenient, but its major flaws stemmed from the story and the acting.  I cannot stress enough how bad the acting was. This might be a good film to watch when it comes out on streaming services if you need filler in your day. Sad to say, this film will definitely be washed away in the sands of time.

There is currently no US distributor for the film, however the lovely folks at VVS FILMS are handling distribution in Canada.

“THE ASSENT is a fresh take on possession lore, and that makes for a terrifying premise.”