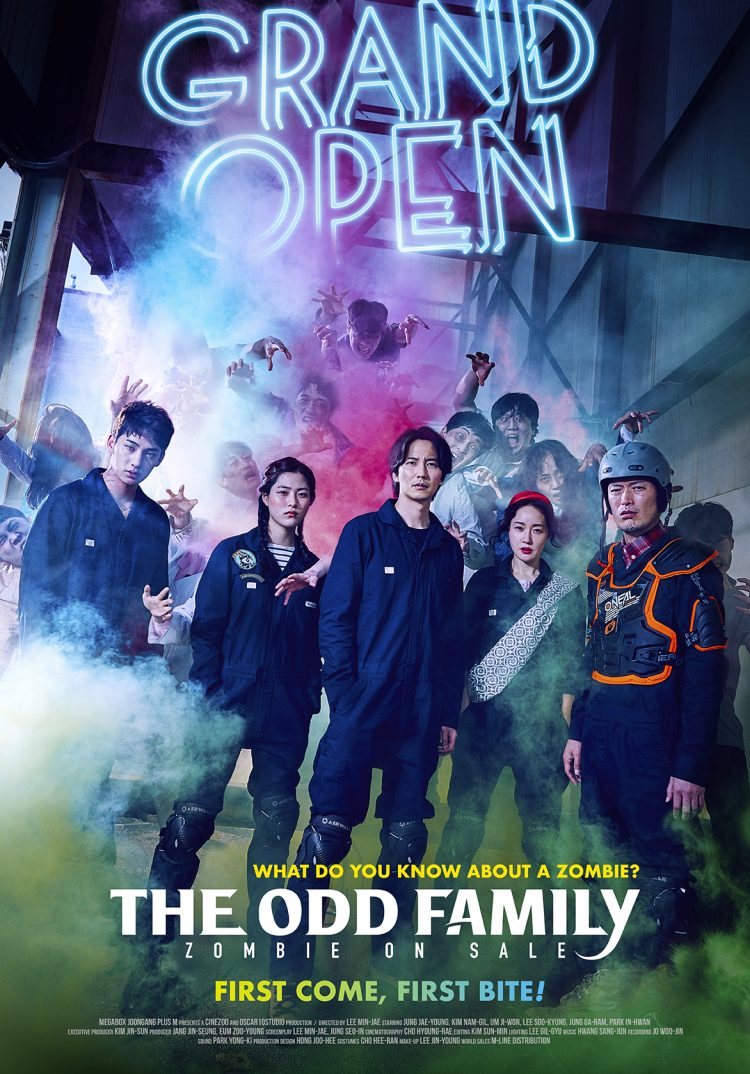 The time has again come for FEAR FOREVER to bring you coverage of THE TORONTO AFTER DARK FILM FESTIVAL, one of our home-grown favorites. This year the festival brings us what I think is one of the most fun films of the year: THE ODD FAMILY: ZOMBIE ON SALE.

Since 2004’s SHAUN OF THE DEAD, horror and comedy fans alike have been waiting for a zombie comedy to match it. I think director Lee Min-Jae has achieved that with THE ODD FAMILY: ZOMBIE ON SALE. Earlier in the year, THE DEAD DON’T DIE was a contender for this honor but it was very divisive among critics (I think the word “pretentious” was thrown around a lot, but hey, I liked it). I have a feeling however that the response to THE ODD FAMILY: ZOMBIE ON SALE won’t be arguable at all.

After human clinical trials create an all too familiar deadly virus, a test subject wanders into a country town where he promptly bites the father of the Park family. After catching the undead biter- the Park family have differing ideas on what to do with their new pet: Jun-Gul and his pregnant wife want to kill him, Min-Gul wants to sell him to a laboratory, Man-Duk wants to cash in on the regenerative effects of his bite, and the youngest, Hye-Gul, is falling in love with him! Naturally, things do not go to plan and suddenly this very unusual family find themselves having to fight for survival against the walking dead.

The Park family are a set of truly zany characters. Brought to life by Kim Nam-Gil, Jung Jae-young, Um Ji-Won, Lee Soo-Kyung, Jung Ga-Ram and Park In-Hwan. These actors, skilled from extensive careers, are amazing comedians who sell the entire film. They bring a perfect mix of charm, heart, slapstick and snappy comebacks to these memorable characters. You will have a soft spot for the odd family thanks to these great performances.

Something that adds to the genius humor that THE ODD FAMILY is, is its self-awareness. It truly knows it is entering a very deep sub-genre pool and seems to be saying “Ok, you know how these movies go, how about we just make you laugh?” The characters even watch a clip from TRAIN TO BUSAN to prepare themselves for the fight in a very clever nod to the hugely successful horror film from 2016.

The film wouldn’t be a South Korean horror movie without the long run-time, but I found myself never wanting the nearly 2-hour hijinks of the odd family to end. An exciting blend of something for everyone: hordes of zombies, explosions, romance, and… cabbage? I especially loved one scene which features a ‘zombie nightclub’ complete with DJ. Also, said undead creatures aren’t cheesy in the slightest, expert practical effects make them look as gruesome as any serious zombie horror invasion. The fact that the film is a comedy doesn’t mean it skimps on quality.

THE ODD FAMILY: ZOMBIE ON SALE is my new go-to recommendation for horror-comedy and it gets full marks from me!

“THE ODD FAMILY: ZOMBIE ON SALE is one of the most fun films of the year “