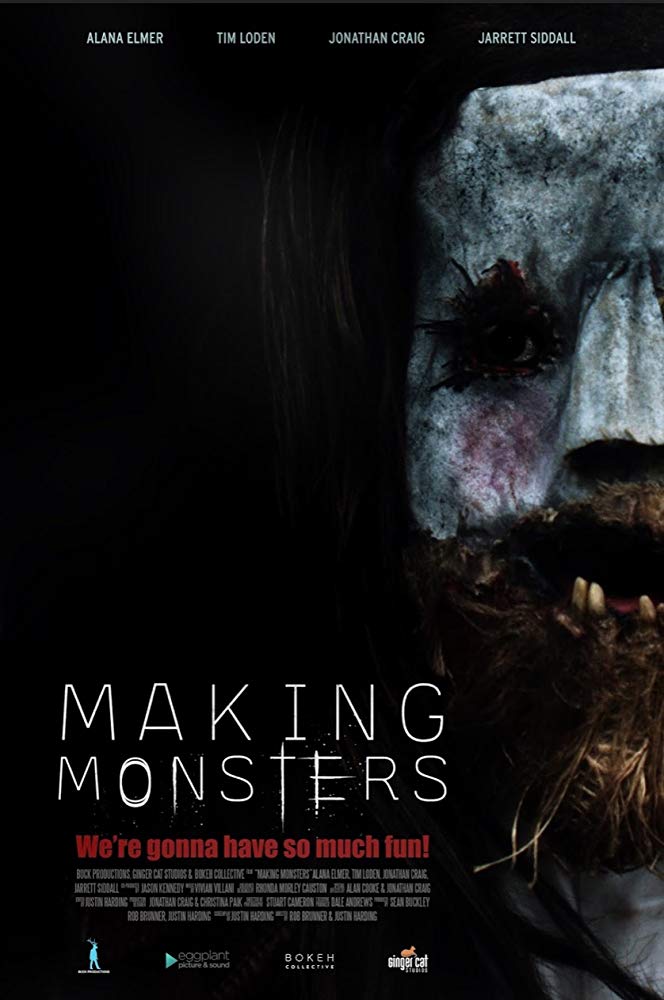 MAKING MONSTERS was one of the standout films from this year’s TORONTO AFTER DARK FILM FESTIVAL. In a very timely premise, we follow a YouTube prankster couple as they take a weekend trip to a friends little getaway.

Alana Elmer and Tim Loden play said couple Chris and Allison, and do a fantastic job delivering sincere and realistic performances. Chris is an unlikable, self-centered bro-type prankster. Within seconds of being introduced to his character, his douchey-ness shines. His wife Allison is the victim to his pranks and does a great job of portraying her unwillingness to be involved in her spouse’s vision as a content creator. After starting treatment to increase her fertility in order to get pregnant, Allison informs Chris that their pranking days must come to an end. Chris of course is reluctant but eventually agrees that the prankster’s lifestyle is not a sustainable one. In a chance encounter the couple bump into an old friend who invites them to his remote home, a renovated church, for a weekend. The couple arrives to find themselves in the strange and uncomfortable company of David, played by Jonathan Craig, who does his best to channel Mark Duplass’ tone and character in the CREEP films. Things take a turn for the worse as the couple soon find themselves living a nightmare filled with real monsters and a masked murderer.

Because this film mirrors its source material, that is, YouTube prank videos, it is often cut in sporadic and juvenile ways with accompanying trendy music. For example, the film’s opening credit sequence is an eye-roller but this is done intentionally to give the viewers an accurate representation of the background of the characters. Rob Zombie mentions in the director’s commentary of HOUSE OF 1000 CORPSES that making your lead characters unlikable is actually not a bad thing. If your audience is rooting for your main character to die, that means they are engaged in the film, and this is the case with MAKING MONSTERS.

The tone of this film is very tongue-in-cheek. Right from the opening scene there were laughs as we follow a naked man running through a field being chased by a madman on a lawnmower. The music accompanying the reveal of the assailant comes out of nowhere, and is a bellowing orchestral piece that comes across as a self-aware ham-fisted horror movie cliché.

The gore in MAKING MONSTERS is top notch. There are some scenes that will make you squirm and most of them seem to be created via practical effects. One scene with a pitchfork was particularly creative and horrific. The monsters are literally made by director Justin Harding who also worked in the visual effects department of the production. The film is clearly made on a micro-budget but the filmmakers definitely make the most of what they have, even though sometimes the monsters do look like people in monster costumes.

MAKING MONSTERS feels like an ode to classic horror movies while looking at them through the eyes of modern online content creators. The film has an engaging mystery element that keeps you guessing, and is worth the payoff.

“MAKING MONSTERS is a meta take on why people enjoy scary movies.”