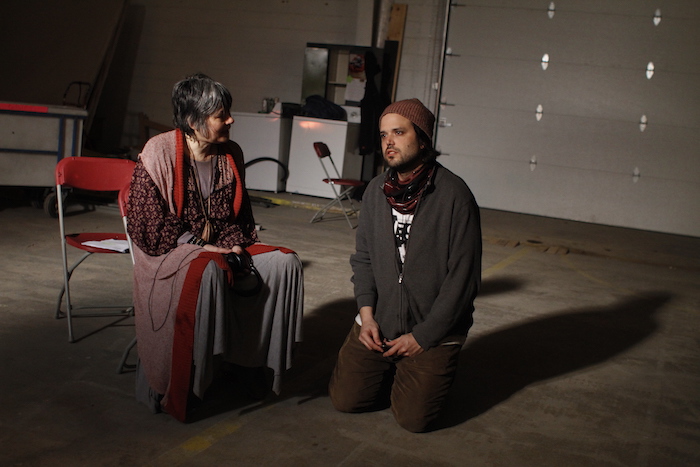 FEAR FOREVER (FF): Your visual work is almost like an electronic artist doing sample-based music. You do live visuals for bands like BLACK DICE and PANDA BEAR. What’s that like? What kind of software do you use?

DANNY PEREZ (DP): I’ll give you the short version. I graduated NYU film school but was super into experimental film and was hanging out with my friends in BLACK DICE and ANIMAL COLLECTIVE and they were like “hey you wanna do some videos?” So I was into a lot of those kinetic filmmakers like Jordan Belson and the Whitney Brothers and all that kind of liquid light stuff that they would do at concerts. So I had a traditional background but I wanted to somehow bring that kinetic experience to it as far as physical movement. I’m a big music fan so those things just kind of coalesce as far as me doing visuals for the bands. This was like 10 years ago before this VJ program that I use and everyone uses called RESOLUME. But I would make DVDs and use an old video mixer. So I’d basically have two turntables and I was mixing the clips live. I got so much shit over the years for it and still did up until like 3 years ago. VJ’s would literally be like, “Ugh, you’re using DVD players? Oh my God.” No matter what there’s fucking egos, there’s jocks, there’s fucking dudes that want to swing their dick around. I’m like, “Really? You want to shame me for using DVD players?” I shit you not, from fucking Coachella to Primavera, 99 percent of the time after I’d do a set people would be like, “God Damn. I’ve never seen anyone do shit like that lock and key with the music and so forth.” Yeah, that’s because I’m actually listening to the music and making stuff for those sounds. Anyway, if I’m allowed to brag about one thing, that’s something that I’ll take. As the years went on and I got shamed more and more by festival people and other VJ’s for using my analog gear I finally joined the digital revolution. It’s just computers and a midi pad that allows you to mix live and really the bulk of it is that I make the clips beforehand. So when you see one of these shows it does feel very synchronized. But the reality is all the clips are pre-made, I’m just looping it back and forth on top of each other. I love doing that stuff, so I’m a little depressed and stressed out about the prospect of concerts not being around for a long time. If I had my brothers that would be the bulk of my work and then I would do an indie film every two to three years. I’d do live visual stuff more often because it’s very satisfying. I’ll make content or some shots and a week later I’m in a club in Europe with like a thousand people and it’s on a big screen and I’m like, “FUCK YEAH” and get that immediate satisfaction and that physical energy. With a film or video it’s a lot of prep, it’s a lot of work beforehand and then it’s just a blip in the digital abyss of YouTube. The consumption of media at this point, and I’m guilty of it myself… That shit’s a little weird. Doing a concert and being in the room, feeling the bass, seeing the strobe lights and having your eyes get distorted and only remembering the images and have beats, that’s super fun to me.

FF: It seems like there’s an uncomfortable mix between childhood wonder and bad acid trips in your films and music videos like the recent video for “Uncle Donut” by AVEY TARE. It that just for the juxtaposition or is it related to some form of childhood trauma?

DP: It’s all about duality to me. I grew up Catholic and what I saw around me in terms of people in the church what went on was not “Christian.” So from a very early age I was kinda dubious about people that profess to be one thing behave another. You combine that with becoming a stoner and getting into a lot of weird music from the 60s… I love that duality of these pop musicians like BRIAN WILSON or JOHN PHILLIPS from THE MAMAS & THE PAPAS that are making this saccharine sunshine pop but behind the scene they are total fucking villains and douchebags. Everyone loves to romanticize Laurel Canyon and THE BYRDS and that whole era, but those guys were motherfuckers, they were sleazebags that just cashed in on the hippie movement. But mind you, that’s what I like. I like that duality. On the surface it’s a saccharine sunshine pop thing but beneath the surface it’s pretty sinister and pretty fucked up. In ODDSAC that whole campfire sequence is about a happy family roasting marshmallows and then it turns into this kind of disastrous thing and some fucking people die. That’s just me being a cynical bastard being like, “fuck you happy family.” I can appreciate it now as a petulant jab against the nuclear family. You’re right; it’s about juxtaposition and duality. To go back to that feeling of uncomfortable-ness, I like that that’s what it arouses. Unfortunately it’s a confusing sensation for mainstream audiences.

FF: 2020 has obviously proven itself to be a very unpredictable year. What do you see for yourself in the future?

DP: It’s rough man… it’s rough. I was literally booked on directing a TV show episode in Vancouver and that was last month. That was going to be my first directing job in a minute as far as a live action traditional situation. I have no idea what’s going to happen. That’s the best I can do… I don’t know. It’s pretty scary. I think we’re going to see some really shitty stuff getting made. I don’t want to end on such a downer note. It’s a weird situation as it is for everyone and there are bigger fish to fry than the next season of my Netflix show. At the very least I’m super lucky that I have many outlets; I draw, I make music, I have the whole experimental side to my work. So for all intensive purposes I could make another ODDSAC and release it in the same way and do a whole separate path as far as not trying to work in the more traditional industry. That being said, it’s yet to be seen. I think everyone’s dealing with this right now. I’ll tell you this, I was writing a feature film that I spent the past year and a half working on, writing and refining, that the past 6 weeks of what has happened has basically rendered all the themes and social politics of it null, i.e. nobody’s going to want to make this fucking movie. But I’m not going to worry; I’m pretty self-sufficient as far as I can always do the animation or experimental things on my own. The real challenge is… how do you find an audience? It’s pretty bonkers man. I think people now more than ever need to support independent art and independent artists. It’s a weird time but it’s an exciting time too. We’ve seen a lot of the vestiges of the old world kind of dissolve and fade away and we’ve seen a lot of the bullshit rise to the surface. So now is definitely the time to react to it, meaning: Are you fine with the way shit was? Or do you actually want stuff to change? Hopefully people use that to focus on positive things and do good things and not just dig their heels into the dumb shit. That is my hope for the world, and myself too, that people just open up… we have more in common than we don’t.