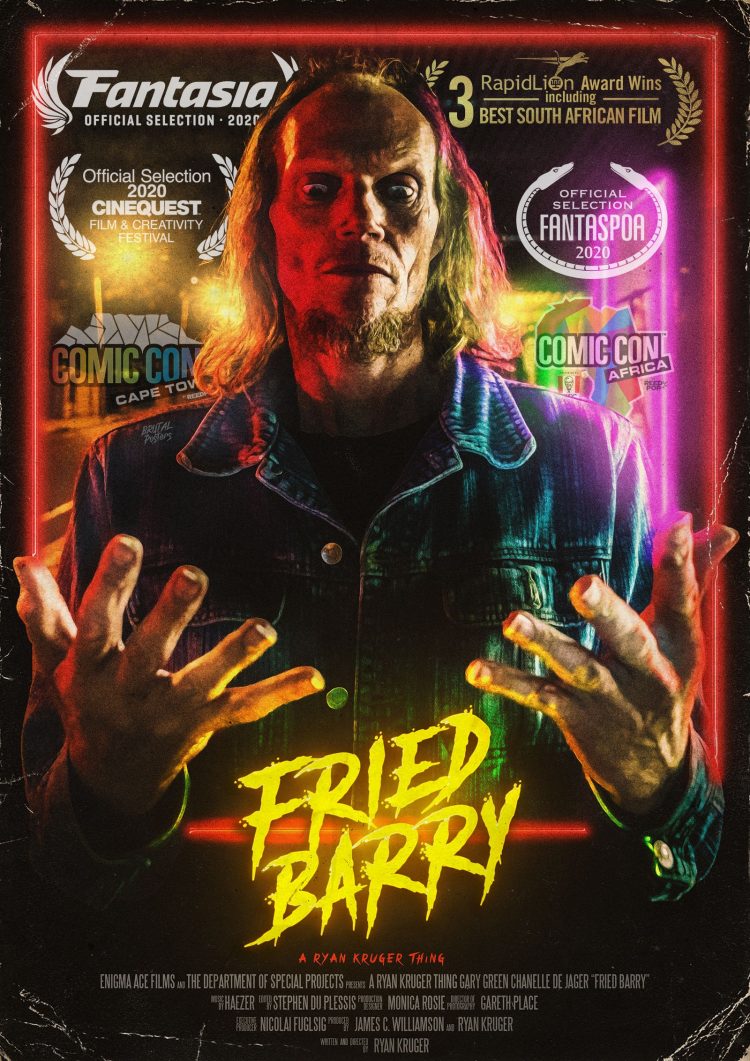 As most of the world grinds to a halt, The Fantasia Film Festival pushes forward. Like so many other fests this year, Fantasia has taken itself online in order to keep its fans drenched in genre cinema, while also keeping them safe from a global pandemic. Many of the films are available as “On Demand” titles, while others are playing at a specific date and time to create a more communal feel. One of the first titles I received was the bonkers alien possession film FRIED BARRY. Based on the 2017 short film of the same name, director Ryan Kruger takes his insanely weird premise and turns it into a full length feature. I will say that for a debut feature, FRIED BARRY oozes style and cinematic language of the raunchiest order, that most directors will never even come close to achieving. Although far from perfect, not a bad way to start the fest for this writer.

FRIED BARRY opens with a disheveled looking Barry (Gary Green) wandering the streets of Cape Town, South Africa. He’s a scumbag of the highest order, and has a look we’ll just call “unique”. He’s getting into fights, getting drunk during the day, and tying off for some intravenous drug use all before dinner time. All indications point to this being business as usual for our protagonist. Before heading out to continue the debauchery parade, he stops at home for a meal and an argument with his wife(?). She berates him for being a deadbeat dad, and a just all around shitty human being. He doesn’t say a word to his wife or his son, as he leaves the house to keep the mischief going.

Only this time, while walking on a secluded street, Barry is possessed by an alien life form. His body is drenched in red light as he levitates into the air. A loud humming sound blazes through the night. Barry is poked and prodded before being set back down to earth in a sequence that was reminiscent of something out of HOBO WITH A SHOTGUN meets FIRE IN THE SKY. In fact ,I found the whole greasy grimy aesthetic of this film to be very much akin to that of HOBO. It’s the same kind of heightened absurdity, while exploring the darkest underbelly of the human (or inhuman) condition.

Once Barry is placed back on earth, it’s sensory overload for our new alien inhabitant. While this alien invader isn’t necessarily inherently evil, it’s certainly quick to give in to the base urges of its human host. The alien goes clubbing and takes a variety of illicit substances, while also succumbing to nearly every sexual advance that’s thrown its way. We’re unclear if the alien is giving in to its own desires or that of Barry’s, but one thing is clear, almost everything Barry does now is guided by some form of primal impulse. The film will continue this way for roughly ⅔ of its runtime. Sex, drugs, more sex, and a whole menagerie of random street encounters make up the majority of the film. A “city symphony” of nastiness if you will. There’s even a sequence where Barry flies (yes, flies) all over Cape Town to the sound of searing techno music.

There’s not much of a plot per se, until we hit that ⅔ mark. As I said earlier, this alien isn’t really good or bad, it’s just kind of going with the flow and experiencing whatever it can as Barry. It even goes so far as to save someone’s life at one point, while ending a life a few scenes later. In both instances it was what probably needed to be done. Earlier in the film, we see a news story about a string of kidnappings in the area. It isn’t until Barry runs afoul of said kidnapper, that any semblance of “story” really begins.

I would argue that although there is a loose narrative, that’s not really what the film is about. It seems like it’s first mission was to show a seriously corrupt city that  Barry calls home, and more importantly how an “alien” consciousness might interpret these surroundings. The alien is responding to things in a purely reactionary way, so is it really at fault for what it does? Or, is it a product of its environment? I guess it’s possibly some sort of warped meditation on the age old  nature vs. nurture argument. Maybe I’m looking too deeply, or searching for some alternate philosophical meaning. Either way, it got me thinking…and that counts for something, right??

FRIED BARRY is playing on demand for the duration of Fantasia, now until September 2nd. You can watch the film by clicking the Buy Tickets link on this page. 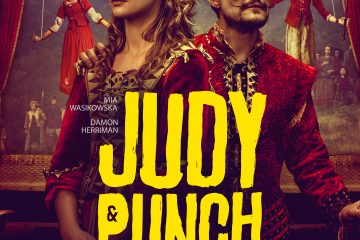