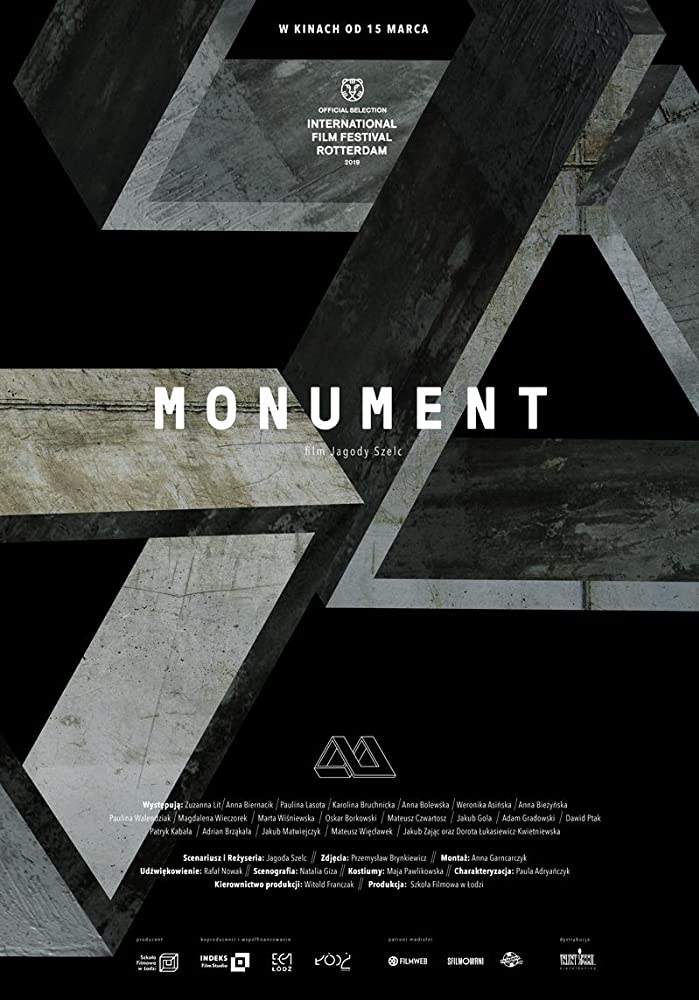 Every once in a while you come across a film that pretty much floors you. It may not be the best film you have ever seen, but it is so unique that it is immediately unforgettable. This is how I feel about Jagoda Szelc’s new film MONUMENT.

A group of young adults take a bus together to attend an internship at a secluded resort. Bleary-eyed, they all wake up having arrived at the hotel, where they come face to face with the stern and straight-up abusive manager. They are all stripped of their identities and made to perform menial labor tasks including laundry, maid service and cleaning a large stone structure in the woods, called The Pedestal. As the work experience progresses, the interns begin exhibiting increasingly disturbing behavior. Behavior that they don’t seem to be in control of.

MONUMENT is no doubt intentionally hard to decipher, it uses its ambiguity to its advantage. As the audience, we don’t really know what is going on throughout the entire film but instead of this being exasperating, it is enthralling. While nothing overtly violent or startling happens in MONUMENT, it still manages to be a horror film none the less. Its pervasive sense of dread means MONUMENT is an engrossing and unsettling watch. The film is a masterclass in using uncertainty as a catalyst for audience anxiety, preying on our core fears of ‘the unknown.’ MONUMENT is full of bizarre and creepy sequences; a woman lets rats crawl over her naked body; others engage in strange mime performances; characters break the fourth wall to tell us cryptic and sinister messages. These instances and others culminate into an electrifying third act with visceral performances and an absolutely wild climactic scene.

Similar in setting to THE SHINING, MONUMENT has the same claustrophobic vibes as the Kubrick classic. The isolation in this film, similar to that of THE BLACKCOAT’S DAUGHTER, is effectively off-putting. The film also has the same microcosm of mystery and distrust as 2018’s SUSPIRIA, mixed with the absurdity of THE LOBSTER. If you enjoyed all these movies chances are MONUMENT will be a film for you.

Appearance wise, there is no warmth to MONUMENT. with its wintery, bleak colour palette the film is a dark, cold trip full of nightmare logic. The film’s ending hits us with a bit of a cliché but it is one of the only films that completely owns it, so it is easily forgivable.

As well as being Jagoda Szlec’s second horror feature (after the family-tension thriller TOWER. A BRIGHT DAY), MONUMENT is a graduation film by the acting students of the Polish National Film, Television and Theatre School in Łódź. Clearly talented, these graduates weave their unassuming, conversational dialogue into a frightening tale which renders the heart. They throw themselves into their roles, giving the uninhibited performances MONUMENT needs, to have the impact that it does.

MONUMENT is more of an experience than a narrative, but don’t let that scare you off. The film feels like a big ritual we are secretly privy to. I have always been a fan of films which give me a chance to form my own interpretations-that is what art is all about, and MONUMENT is the epitome of art house. Though MONUMENT was released on digital in Poland mid-Febuary 2020, it doesn’t appear to have a US VOD date. This one might just be a film which stays in the collective consciousness of those who were able to catch it at festivals.


“Its pervasive sense of dread means MONUMENT is an engrossing and unsettling watch.”