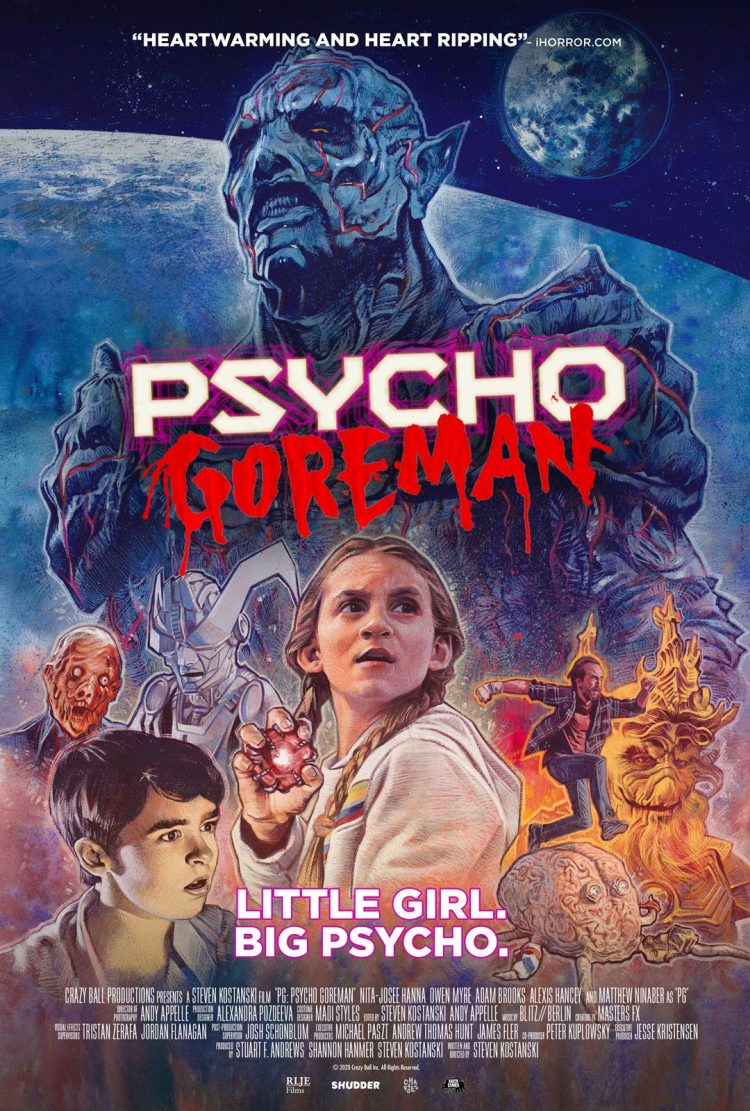 2021 is here! We’ve still got a long way to go, but hopefully some semblance of normalcy is in sight. I’m hopeful, at the very least, that we’re going to start to see some of 2020’s delayed feature films see the light of day. One of the films I was most anticipating, was the insane-looking Steven Kostanski directed PSYCHO GOREMAN…affectionately known as PG. PG stands as not only an acronym for the titular space creature, but also as a tongue-in-cheek reference to the PG rated after school specials so many of us grew up with. That being said, PG is most certainly R rated, and it’s unlike any after school special you’ve ever seen. At least in this galaxy.

PSYCHO GOREMAN is on a unique spectrum of films. I would say that it’s something akin to THE GREASY STRANGLER, but through the lens of 80’s era Amblin Entertainment  films. It has all the whimsy and childlike innocence of a Spielberg film, with the uncomfortable gore and absurdity of Adult Swim’s TOO MANY COOKS (which you can watch HERE). If that makes sense to you, congratulations! You have the precursory knowledge needed to understand and fully appreciate the absurdist cinema language PG speaks to. It’s not required knowledge, but it will definitely give you a leg up in terms of what to expect. If I have a complaint, it’s that PG walks that line a little too gingerly for this writer. I wish it would have gone full absurdist, or full after school special. I just felt that it pulled back in places it should’ve leaned in and vice versa. Even so, I enjoyed my time and I think most of you will too.

Steven Kostanski is no stranger to horror films, or the absurdist film movement. Aside from being an extremely talented special FX artist, he’s also become an accomplished director in his own right. I first became aware of Kostanski as an early member of the Canadian film collective known as Astron-6. You may know this group from their previous efforts on films such as FATHER’S DAY, THE EDITOR (my personal fave), THE VOID, and Kostanski’s solo-effort on the ABC’S OF DEATH 2 segment W IS FOR WISH. Here’s how their Wikipedia page describes the group: “Astron-6 is known for producing low-budget, 1980s-centric independent movies that often combine horror with comedy.” All of these films are exceptional examples of this, and I do mean exceptional. PG absolutely follows suit. There are very few filmmakers that can produce these kinds of films successfully, and Kostanski is at the forefront.

PG is the story of a family unit, living out their every day lives. Mom Susan (Alexis Kara Hancey), and Dad Greg (Adam Brooks), try to corral their rambunctious kids Mimi & Luke (Nita-Josee Hanna & Owen Myre respectively). It should be noted that Adam Brooks is a mainstay in the Astron-6 universe as a founding member and actor in most projects. His character of Greg the dad has some of the absolute best, and ridiculous, dialogue in the entire film. His story about how accepting candy from strangers can be a GOOD thing, literally had me in tears. Make no mistake, this is Mimi’s movie. Mimi is an eccentric child, and although she seems to be the younger of the two, she calls the shots. This is evident from the beginning of the film when we see her and Luke playing a game of Mimi’s invention…”Crazy Ball”. It is crazy, and almost completely incomprehensible by design. Crazy Ball will come up numerous times throughout the film, and each time it somehow seems to get more hilariously complicated. One day, after losing a game of Crazy Ball to Mimi, Luke’s punishment is to dig his own grave in the backyard. In this universe, a punishment so bizarre seems to be commonplace. Luke unearths a glowing purple gem, that we know from the opening scrolling credits, is the prison for an alien destroyer of worlds.

Once Mimi gets a hold of the gem, the alien is released. Whoever is in control of the gem, is in control of the alien. The alien is huge and slimy, and looks like some combat ready version of the creature in THE SHAPE OF WATER. He speaks in long diatribes about violence and the havoc he’ll wreak when released. Mimi is unphazed and chooses to make a playmate out of this alien creature. Luke and Mimi decide this planet destroying monster will be named Psycho Goreman.

At first PG is an unwilling participant in Mimi’s games. He constantly hurls threats at the children, but neither of them are the least bit concerned. PG lives in an abandoned warehouse behind the children’s home. Mimi sets him up with a TV and PG starts to learn a little bit about things on earth. We know he’s dangerous, as anyone who accidentally comes upon the old warehouse will discover. At one point a group of petty criminals decide to hold up in the warehouse and discover PG brooding. He instantly dispatches the criminals with varying degrees of over the top gore. The next day when the kids see the carnage, no one bats an eye. Even when PG turns one of their friends into a slimy walking brain, no one seems to even notice. While all of this is playing out on earth, an intergalactic council discovers that PG is alive and well on planet Earth. Let the games (wink, wink)…begin. This is the kind of ridiculousness that lies ahead.

PG has all the childlike innocence of films like E.T., or SPACED INVADERS, but in the twisted way only Kostanski & CO could produce…Complete with a trying-on-outfits montage to help PG fit in. The film is filled to the brim with all the practical effects your 80’s loving hearts could possibly desire. The Make-up and costumes are somehow both high caliber and low caliber at the same time…seemingly by design. Everything within is impossibly high-concept, while never relinquishing its low-brow sensibilities. It’s a film that sticks with you, if for no other reason than that there really isn’t anything quite like it. It’s fun, violent, and goofy as hell. PG is the blood-soaked after-school special you didn’t know you needed.