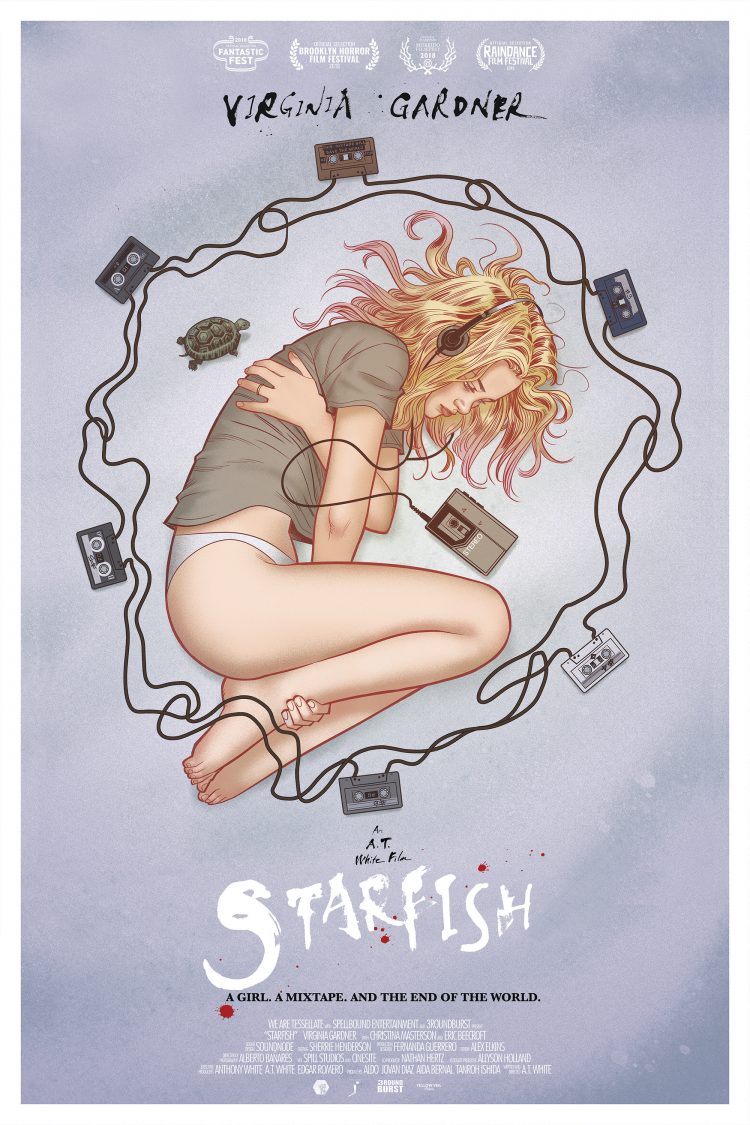 STARFISH is a 2018 sci-fi/ cosmic horror film directed and written by A.T White. Premiering at last year’s Fantastic Fest, the film is going on to have a theatrical release in select US cinemas this month. STARFISH is an intimate spin on the post-apocalyptic subgenre.

Greif stricken Aubrey stays in her best friend Grace’s empty apartment after attending her funeral. When she wakes up she finds the city covered in snow and completely empty of life apart from the monstrous alien creatures now roaming about. A voice on a two way radio tells Aubrey that Grace and her friends opened a portal to another dimension using sound waves. She then finds a tape from Grace reading ‘This Mixtape Will Save The World’ which instructs her to find other tapes hidden around the town and play them all in order to shut the portal and send the creatures back where they came from.

What a synopsis! Although in reality STARFISH is a not the epic hero’s journey into science fiction its plot would have you believe. What we instead get is a surreal, mumblecore style film about dealing with the loss of a friend and being alone.  STARFISH is quite light on the horror. Video game like monsters jump out now and then, to remind us that they’re there, but ultimately these encounters take a backseat to character development and introspection.

Starfish begins to feel slow after a while but its charm mostly redeems it of this. The story can also get quite confusing at times and the mixture of filmmaking styles adds to this. An example is when we get an ethereal animated sequence and a suddenly meta scene that completely comes out of nowhere. They were effective at breaking the monotony that sometimes glazes over the film but other than that they really left me sitting there dumbfounded and scrambling to keep up.. The more I think about these however the more they grow on me and I appreciate the effort to bring in new ways of storytelling.

Starfish has a moving score which the director composed himself and honestly it’s one of the best film scores I’ve ever heard. It made the film beautiful to listen to; the lilting and meloncholic piano music making you feel lonely along with the main character. It compliments her isolation and silent search for meaning in an empty world. The soundtrack we hear mostly through Aubrey’s headphones, making the audience a part of the story. A combination of haunting and more upbeat electronic indie music from bands such as Sigur Ros, Sparklehorse and the director’s own band Ghostlight- STARFISH’s soundtrack is a mixtape I would hunt down a cassette player just to listen to.  A lot of thought and feeling went into the audio of this film and it shows, I’m not sure I would have enjoyed the film as much as I did without the director’s attention to this.

Virginia Gardner brings to life a very likeable protagonist, she inhabits the screen with an enchanting yet very grounded performace. Gardner carries the film basically by herself once the ‘apocalypse’  has set in, with the only faces Aubrey sees are from her flashbacks and imaginary conversations with a dead Grace. Her only co-star is a tiny baby tortoise which gave an award worthy performance.

An intensely personal film for the director, 100% of the proceeds A.T white makes from STARFISH will be donated to cancer research. STARFISH hits select cinemas on March 13th and continues into April, to find out where it is playing you can visit the website, the film will be available digitally on May 28th.