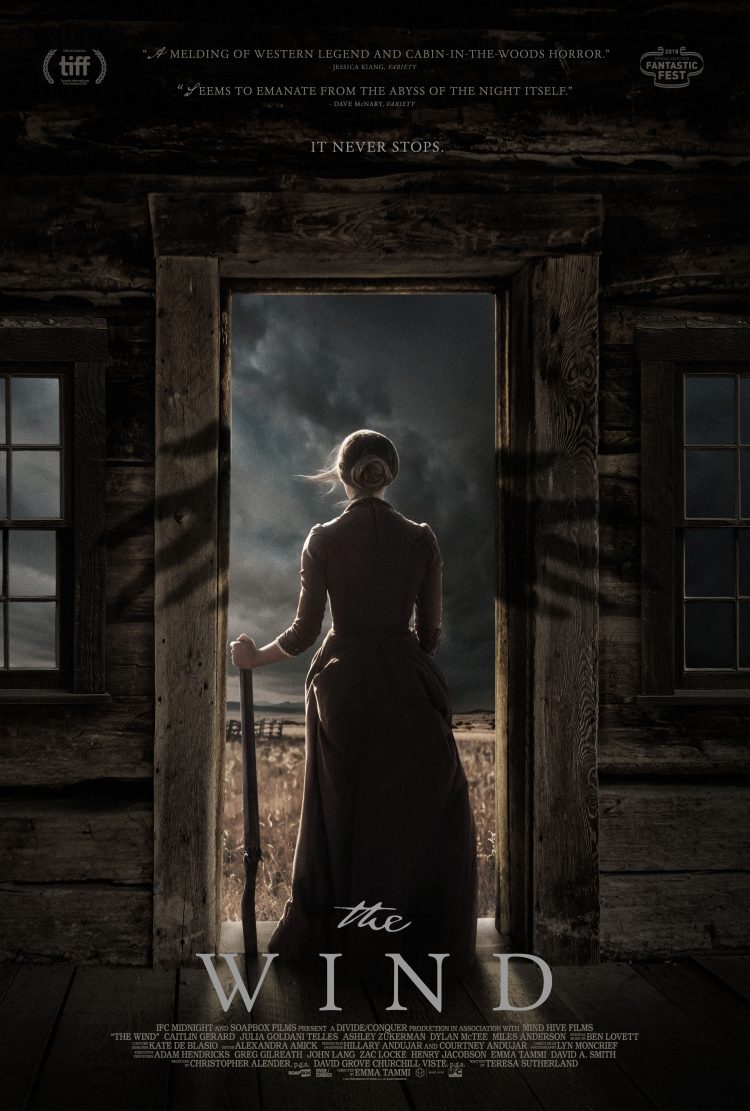 Outside of horror-comedy, it’s not easy to cite successful examples of horror genre mash-ups. In my opinion, the horror western is a rarity, and frankly I can only think of one or two films that fit the bill. I hadn’t really thought about it, but I find it interesting due to the fact that the sensibilities of western films seem to have all the ingredients to set up some interesting horror backdrops. Complete with harsh landscapes, diabolical villains, and often total and absolute isolation, it’s a wonder that this cocktail isn’t attempted more often. So when IFC Midnight sent me a copy of THE WIND, I was excited to see what this particular mash-up had in store. I’m happy to report that THE WIND was a pretty successful hybrid, and I hope to see other filmmakers utilize this oft-neglected angle into the world of horror. 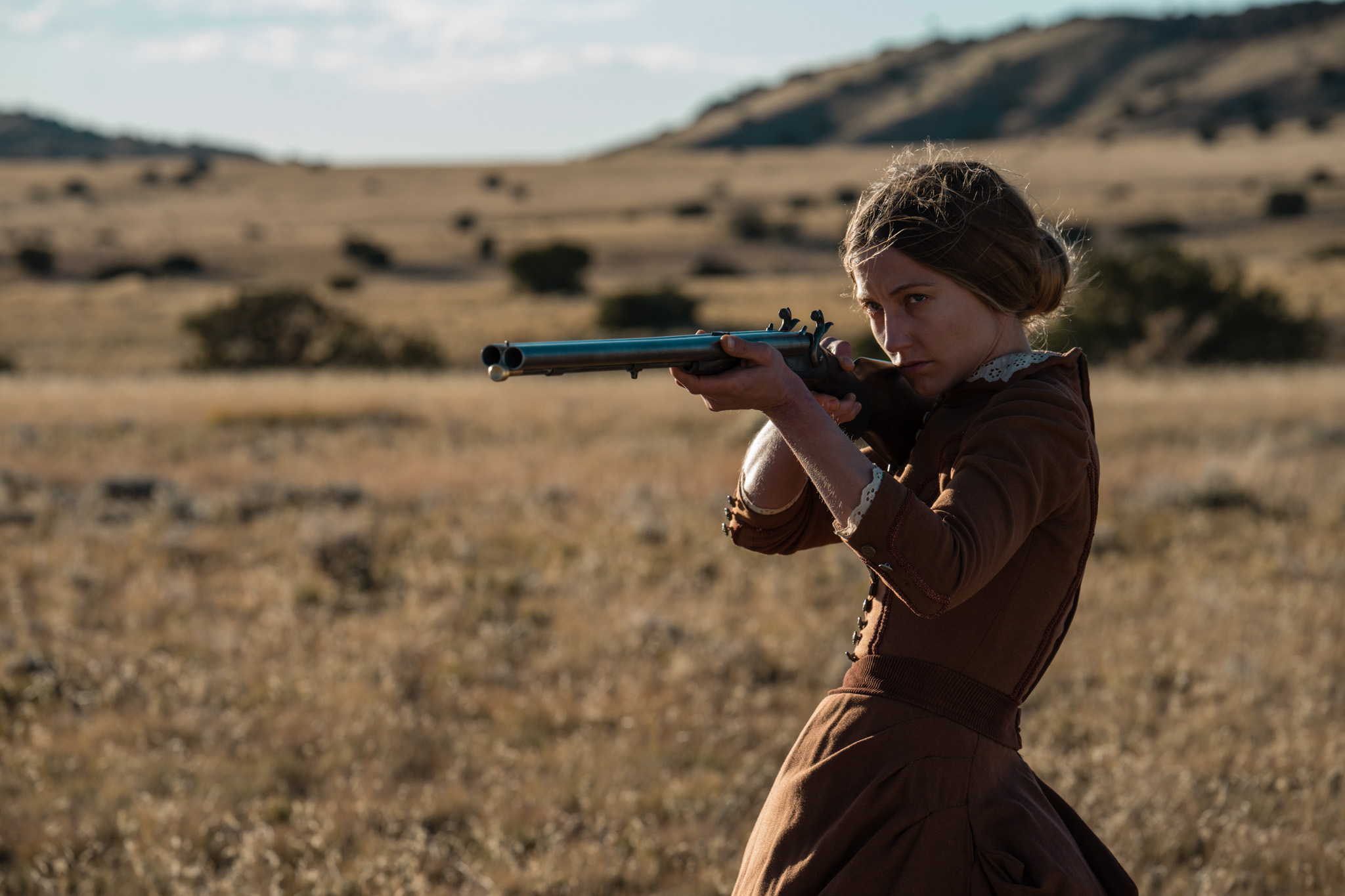 THE WIND kicks off with a birth, a death, and a burial…how very western indeed! The film centers on the frontier era life of Lizzy (Caitlin Gerard) and Isaac Macklin (Ashley Zukerman) as they try to cope with the harsh reality of life in the 1800’s.  Just existing is difficult enough, but it becomes all the more difficult with the arrival of Emma (Julia Goldani Telles) and Gideon Harper (Dylan McTee). The Macklin’s seem to have been alone in this place for awhile, so the young Harper couples arrival is a welcome disruption to their routine… at first. It’s clear to Lizzy and Isaac that Emma and Gideon are VERY ill prepared for life on the prairie, so they offer to help with getting them established. Isaac helps Gideon repair the cabin, while Lizzy shows Emma her way around the garden. Everything seems copacetic, but it’s obvious early on that Emma’s glances towards Isaac are a little more than just neighborly admiration. She stares at him, and comments on how nice it must be to have such a masculine presence around. Lizzy brushes it off as much as she possibly can. 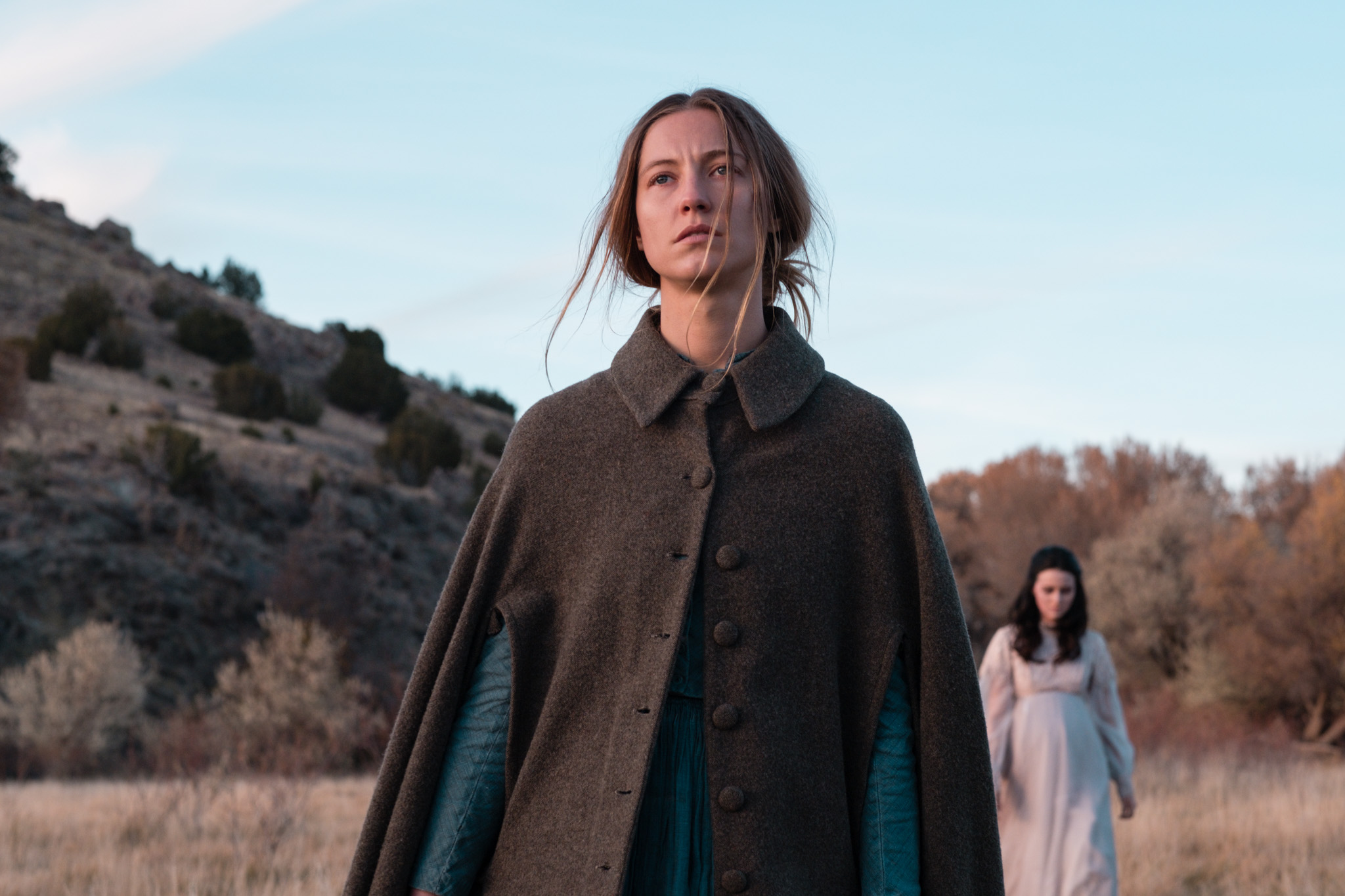 During the night is when the films tone shifts from a face value western, into some more horrific territory. Isaac is often gone tending to whatever business 1800’s frontiersman have to do, leaving Lizzy often on her own. Lizzy becomes convinced that there is a presence in the night, and a demonic one at that. Isaac is dismissive of Lizzy’s claims, and his solution is to give her a loaded shotgun that is NEVER to leave her side. Is this a recipe for disaster, or a concerned husband trying to ease the fears of a frightened wife? Either way, Isaac is less than helpful and a little  obtuse regarding Lizzy’s concerns. The couple stares out into the night, and the only thing on the horizon is the light emanating from the Harper’s cabin. It was once said that if you can see the smoke from your neighbor’s chimney, they’re too close. Let alone having the Macklin’s so close that you can easily see their porch lights in the dead of night. At times it’s comforting to the Harper couple, while other times it feels like their solitary life is being uprooted. Isaac and Lizzy are also struggling with the loss of a child, and it’s a sensitive subject that they don’t like to discuss. Emma and Gideon are young and naïve and don’t seem to pick up on those social cues despite the pain in Lizzy’s face being obvious to any outside observer.

The film takes a non-linear story line approach, seamlessly shifting from the past and present. Both timelines are essential for keying the viewer into the larger story. The catalyst for the horrors that are about to take place begin when Gideon comes to Lizzy and Isaac in the middle of the night. He informs them that Emma is “ill”, but doesn’t elaborate on what that specifically means. As Lizzy covers her face to enter their home, Gideon tells her that “it’s not that kind of illness”that Emma is suffering from. That’s a pretty vague and ominous warning to say the least. Lizzy finds Emma under the bed speaking nonsense, but adamant that she is with child. It’s from this point on that THE WIND lets the western genre take a backseat, and allows the horror genre to come to the forefront.  Do the things that Lizzy hears at night plague the Harper’s as well ?

THE WIND is a hard film to pin down. It plays with the viewer’s sense of time and reality, but also gets its hooks right in you. It’s often unclear if the events taking place are Lizzy’s psychosis, jealousy, or whether there are truly demonic forces at work. Since I can’t think of too many horror westerns, the best comparison I can give you is to say that THE WIND falls somewhere between the prairie demons of DEAD BIRDS and the isolation psychosis of THE WITCH. Both films are good company to keep, and this film is very atmospheric and unsettling even before any of the demonic elements come into play. The film brings to light an isolated existence full of cold hard dread. The story kept me guessing until it’s final frames, and I felt that it had me on my toes for its entire duration. It definitively treads the path of being more psychological than straight up in your face horror. The blood and gore are at a minimum, but it’s the unsettling atmosphere and ever growing dread that will weigh on the viewer long after the credits roll. 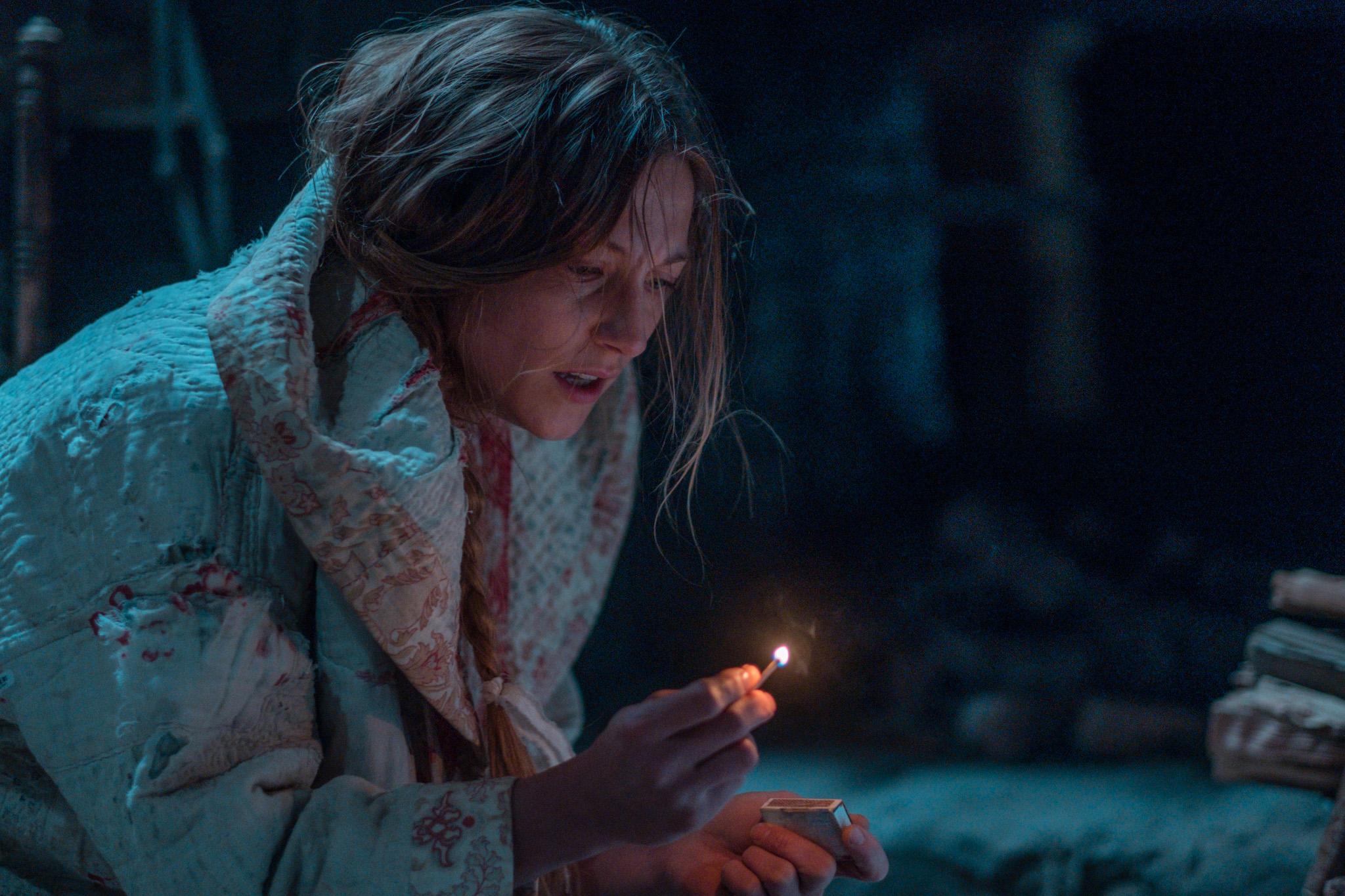 THE WIND takes most of its cues through the feminine lens of Lizzy’s character. The creative forces behind the film are distinctly female, as it was written by Teresa Sutherland and directed by Emma Tammi, and I think that’s where the strength lies. Most westerns idealize the plights and hardships of the men in this environment, but often the female characters are ancillary at best. THE WIND thrusts the female struggle of frontier life into the forefront, and showcases the often-unheralded strength these characters possess. Although their male counterparts treat Lizzy and Emma as hysterical females, it’s quite clear that the ladies are carrying the bulk of the burden in this prairie landscape. I’m typically not the biggest fan of westerns, so this new perspective was a welcomed change of pace for me. I’m hoping that these filmmakers can be the pioneers (no pun intended) of a new era of genre mash-ups.

THE WIND opens in select theatres and VOD on April 5th.