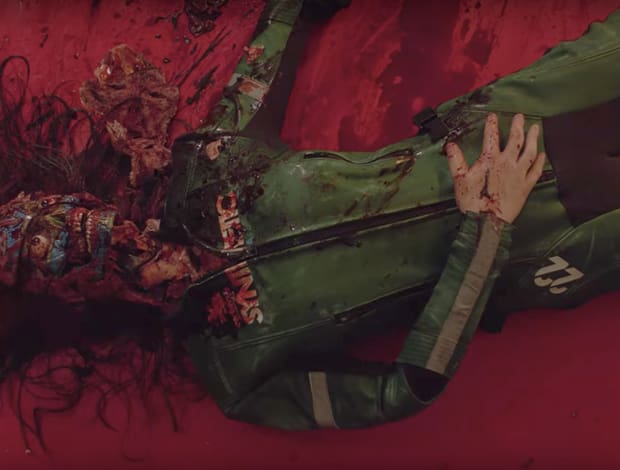 ZYGOTE is the highly anticipated short by Neill Blomkamp and his Oats Studios. So highly anticipated is the film that in just 6 days since its release it has racked up almost a million views on Youtube alone. Blomkamp is beloved by sci-fi and horror fans for films like District 9, ELYSIUM, and CHAPPIE.

I have to say right off the bat that my main issue with this film is that despite me watching it four times, on two different devices and trying each with and without headphones, the audio is so low in the sound mix that I could not make out the majority of the dialogue. When it comes to a 20 minute film, one would assume that each bit of dialogue is vital to the story and without it you are not getting the full picture. My fifth attempt at ZYGOTE I watched with subtitles but by then I was admittedly a little frustrated with the whole thing.

The film stars Jose Pablo Cantillo (CRANK, CHAPPIE) as Quinn and Dakota Fanning ( THE RUNAWAYS, AMERICAN PASTORAL) as Barkley, two lone survivors of a catastrophic meteor strike on earth that leaves them stranded in an abandoned mine.  According to a short video Blomkamp narrated describing ZYGOTE, he explains it as  “a meteor strike brings with it incredible semiconductors and superconducting metals in them that turn mining corporations into the new Google. So in 2050, when the story takes place, you have introduced alien metals and alien minerals into earths biosphere . Along with this is a totally different light based creature or sentience that has been brought and is running amok”. 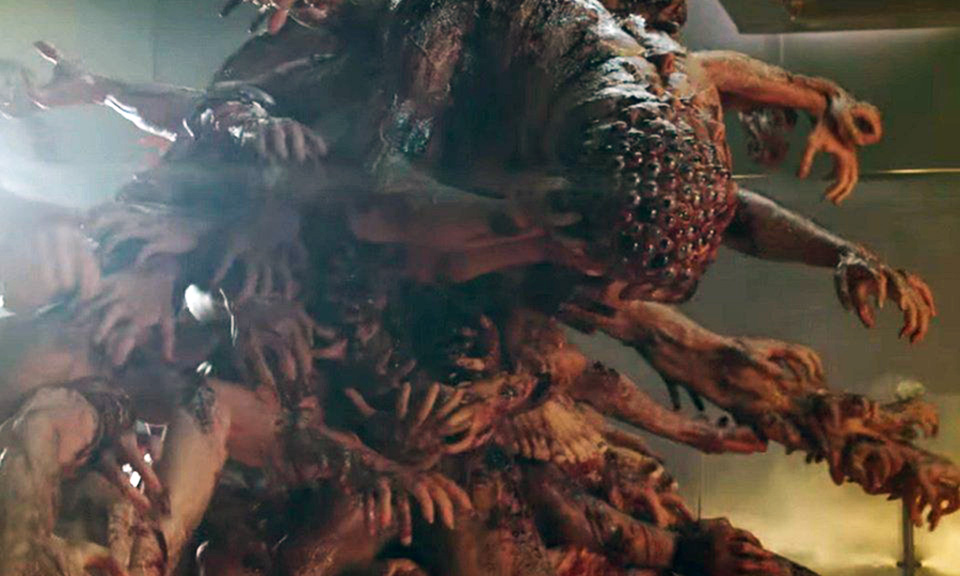 The Zygote monster is a tumbleweed of arms, legs, and eyes that shrieks like a squealing pig crossed with a screaming goat. It absorbs all of the knowledge from its victims along with body parts like hands that it uses to gain access to secure areas via its victims fingerprints. The origins of the Zygote monster and Quinns bleeding gaping eye sockets are connected by a light that he saw when one of his fellow miners cut into some sort of rock and exposed the monster. The light seems to be the vehicle that unleashed the monster on the miners and is responsible for the blinding of Quinn and the strange, violent behaviour of a lost peer named Holebrook. 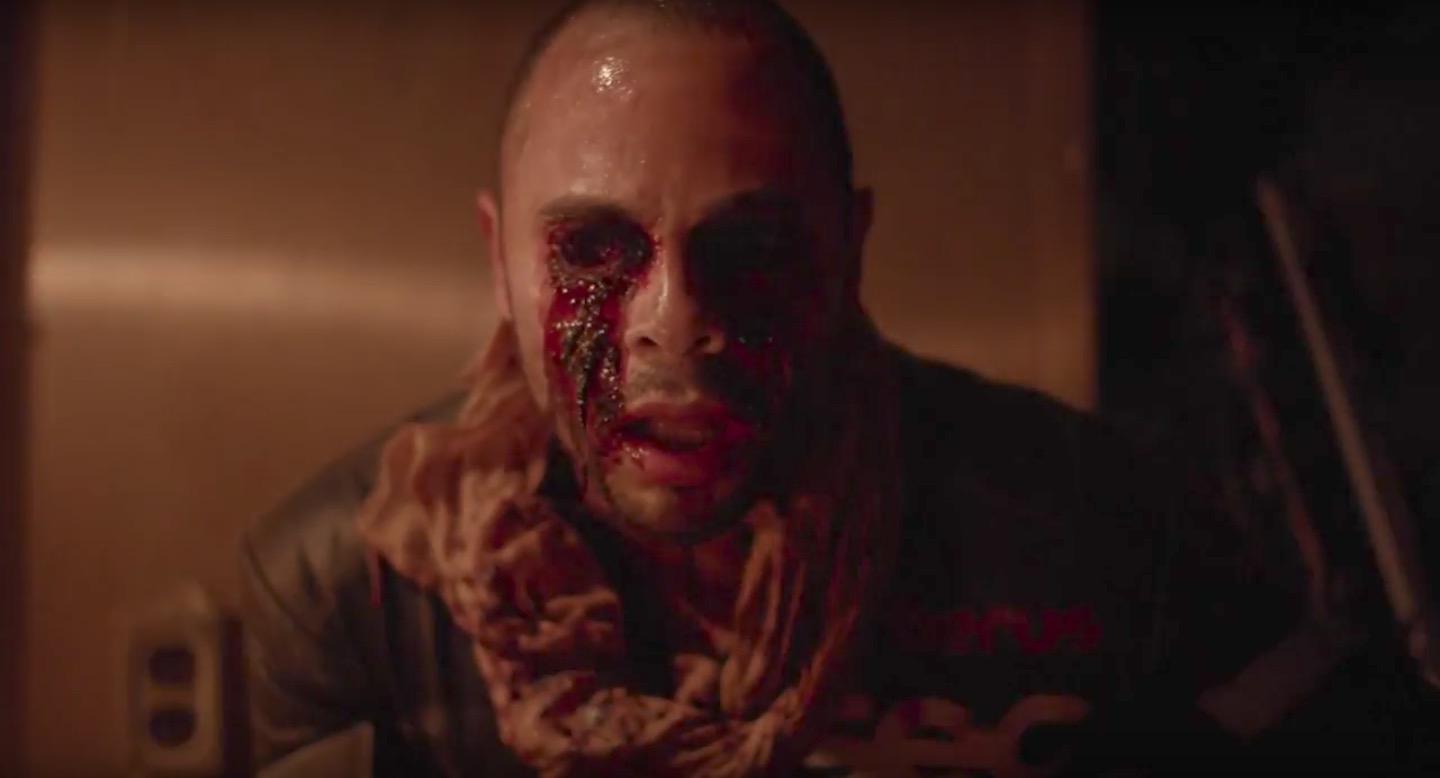 I love the direction of the film. I love the chaotic movement and the frantic POV style shots.   I also really like the production design. It doesn’t look like it was of the highest budget but it goes to show how long you can stretch a dollar as the set looked top notch. This also goes for the costume design. Nothing extremely fancy, but incredibly effective.

I think that despite the low and gruff timbre of Cantillos voice possibly playing into the audio difficulties I encountered, he is great in the role. Dakota Fanning I am not so sure of. She seems like she was still trying to find her footing in the role and maybe if given a chance to develop with the character some more, say if they turned it into a feature, she could really take the role and run with it. 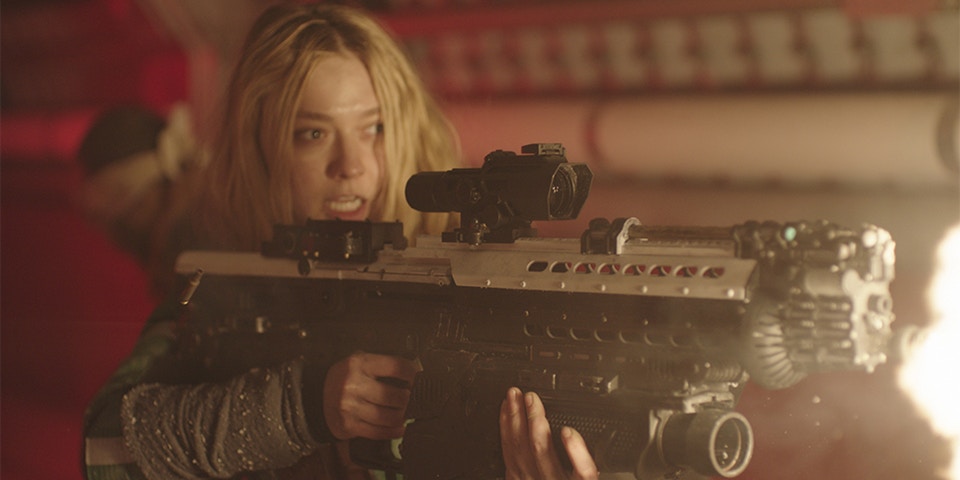 I did LOVE the creature. I love the whole idea of him and his origin story. He really is the star of the show and I hope that Blomkamp expands upon this character.

It’s a tough call for me to say whether I would recommend the film. On the one hand, it’s a great piece visually but the audio issues really detracted from that for me. When you only get half a story, you can’t really assess it as a whole. Unfortunately, the tedious repetition of the dialogue and the film itself altogether for me really took away from and out of the experience. As I mentioned, the film has only been out for six days so I am hoping that those kinds of glitches are kinks that can and will be smoothed out if there is to be a feature length incarnation of the film or any kinds of spin offs or sequels.