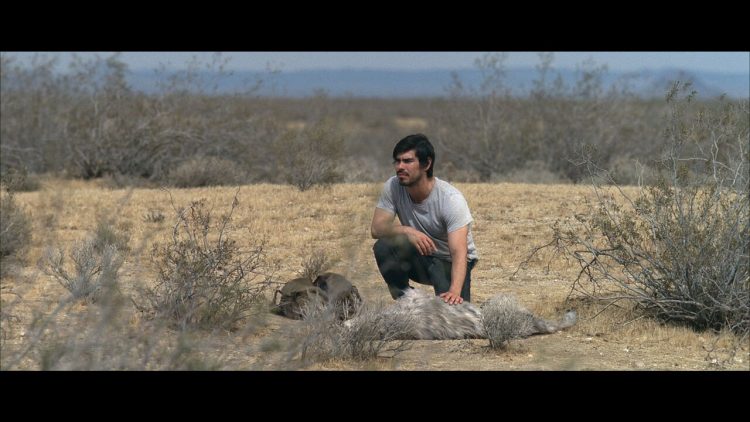 It’s not every day that I find myself spellbound by a film. Interestingly, I don’t think I have ever used the word “spellbound” before, but it is an incredibly apt description of the feeling I am left with after seeing LIMBO. You are probably asking yourself, what is so captivating about this film? The answer is obvious in respect to the sheer quality of the film making elements themselves, and more reflective in its performances and story.  The fact that LIMBO does not reside in the horror, sci-fi, or action genres is another unique facet of the film. So why is it being reviewed on FEAR FOREVER? Because it’s surreal, stunning in its stark simplicity, while eerily familiar in the challenges and situations the film portrays. It’s an incredibly impactful, cinematic, and verging on voyeuristic view into the life of a man going through the motions of confronting a personal crossroad and the ripple effect of how he chooses to handle it.   It also has a mystical talking dog (voiced by screen legend Sam Elliott)who is on deaths door but uses its last precious moments to gift a wish to our nameless leading man, portrayed carefully and beautifully nuanced by Raúl Castillo (RIVERDALE, SPECIAL CORRESPONDENTS). 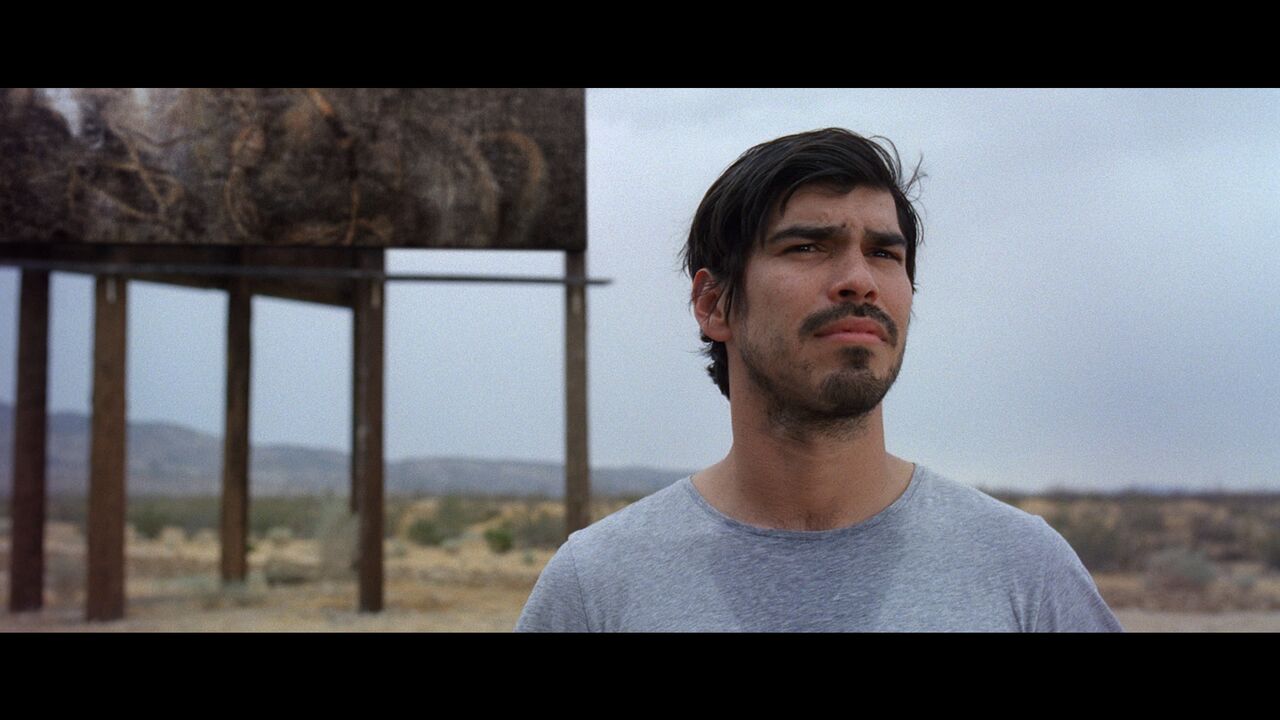 Shot on 35 mm film, LIMBO has managed to stick with me and have me consistently reflect on all of its moving parts. That’s quite a punch to pack for an 8 minute short film. It’s a fantastic case study of how invested you can make an audience in less time than it takes for the credits to roll on a feature film.

Adapted from a graphic novella by comic book artist Marian Churchland, LIMBO opens with strongly focused shots that give an extremely stripped-down and direct vision of the environment in which our story takes place.  There is no opening credits or music, just the crisp sound of the wind blowing and the wild desert plants in motion.  Next we see an empty white car and a billboard of an old, weather-worn painting depicting a battle between two men. As the camera focuses on the painting, the shot is interrupted by a cell phone being thrown at it with a notification for a new text message. “Shit, I still have a two year contract on that phone” are the words spoken through the internal dialogue of our main character. While the tone of the film is emotional and serious, it’s not without humour. The laughs are found in the inner-musings and reactive ideas that come to our leads mind during this incredibly pivotal moment in his life. It’s relatable in its ridiculousness and is just one element of many in this film that I really enjoyed.

As he starts to wander through the barren desert land he reflects on the events that have lead him to this point, and what he would be doing if he hadn’t left.  “I’d probably be at home making tea. Fishing the last bag out of the box”. The delivery of these lines are as mundane as the situation they describe and we start to understand what he has left behind and why.  There are some really great pick-up shots in this scene as well as sound design that is unparalleled. Seriously, I have never been so awestruck by the everyday sounds of making a cup of tea.

As he walks he stumbles upon the very dehydrated and near-death body of a dog lying in the desert. The dog (also without a name) was created by creature designer Tim Martin and holy shit is it impressive. Tim is known for his work on HELLBOY and the upcoming adaptation of Stephen Kings IT, so it shouldn’t surprise me at how incredible the dog looked but I can’t help but wonder how many painstaking hours were put into creating it to perfection.  Our lead offers the dog some water which seems to revive him enough to tell him that for that act of kindness, he will grant him one wish.  What does he wish for?  I won’t tell you what it is, but I will say it is something we all do not have enough of. 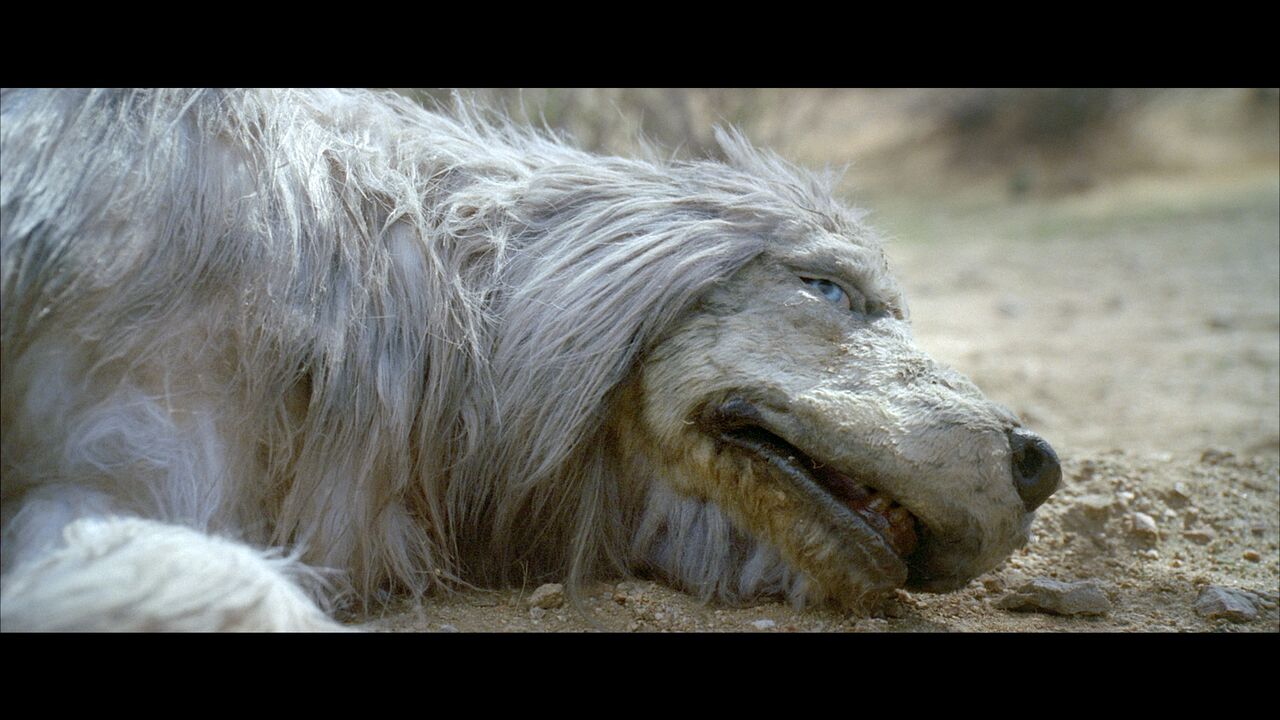 The short is directed by Will Blank who is new to me but with LIMBO being my new obsession, I can say that Will cannot make another film fast enough. Seriously, I was completely blown away by every element of this film and the way Blank displays it for us.   LIMBO comes out today on VOD and with the link provided below, I HIGHLY recommend it watch it. Then, watch it again. Then, show it to your friends as its one of the best pieces of art I have had the pleasure to see in a long time.

“Our rating system is out of 5, but LIMBO is so good that it deserves a 6”