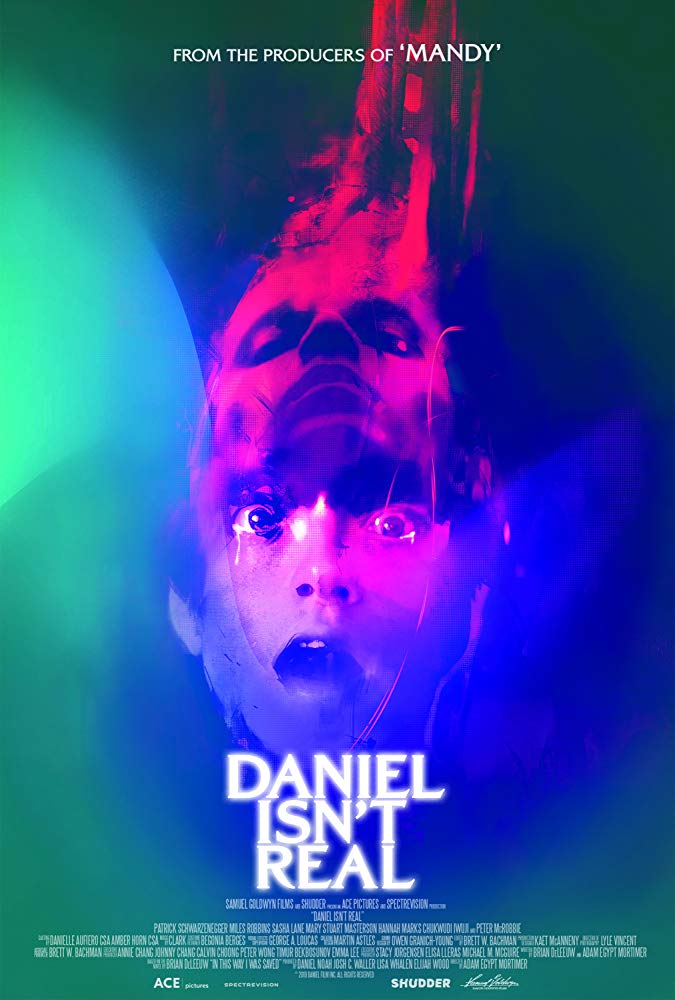 The tenth edition of the TELLURIDE HORROR SHOW has just wrapped, and with it came one of the most impressive film line-ups to date. FEAR FOREVER’S first review out of the gate is for Adam Egypt Mortimer’s imaginary “friend” gone rogue shocker DANIEL ISN’T REAL. The film boasts an extraordinary cast, highlighted by a particularly exciting performance from Patrick Schwarzenegger. Yes, you read that correctly. The son of the Governator gets a chance to flex his acting chops while also getting a chance to flex his muscles. This was admittedly my first introduction to Patrick the actor, and I’ll forewarn you that although he is devilishly handsome, I saw a lot more Maria than Arnold…in case buff Austrian dudes are your thing.

DANIEL ISN’T REAL is the story of a troubled man named Luke (Miles Robbins). The film starts off with a bang…literally… as we see several coffee shop patrons enjoying their morning cup of java. Seconds later a well dressed young gentleman enters the shop and begins unloading a shotgun into anyone and everything in sight. A few blocks away, Luke’s world is about to be turned upside down as well. Luke’s mother Claire (Mary Stuart Masterson) and father are in the midst of a relationship ending argument.  As the screaming intensifies, and dishes begin to break, Luke heads out of the house and down the street to escape the madness. The sirens and crowds of people at the coffee shop prove to be too enticing for Luke’s curiosity. Young Luke is already having one of the worst days of his life, and now he’s face to face with the bullet riddled corpse of the gunman and all the blood and gore spilling out into the street in the aftermath of the shooting. As Luke’s mind is wrapping itself around everything he’s been through today, Poof! Daniel appears. A dapper youth, exactly the same age as Luke, who asks him to go and play. A fortuitous meeting for Luke, since he really could use a friend. The only problem with this turn of events is the fact that…Daniel isn’t real.

The two boys immediately become inseparable, which at first doesn’t seem like such a bad thing. This appears to be the relief Luke’s fragile mind has been searching for. However, as Luke’s home life becomes more strained, Daniel’s behavior becomes more erratic. At first it seems that Daniel’s behavior is parallel to what is going on in Luke’s life. Daniel wants to help but his idea of helping starts to become darker and darker, nearing the point of hurting others. Luckily Luke has the strength to figuratively, and literally, lock Daniel away so “he” can’t hurt anyone.

Cut to a few years later and Luke is a socially awkward college student who has successfully put all things Daniel behind him. But it isn’t long before Luke’s stressful college life, awkwardness around girls, and lunatic mother start to draw Daniel back out into the limelight. Luke goes to visit his mother, and she has truly gone off the deep end. Her once beautiful home is now in total disarray and she seems like a shadow of her former self. She cuts various pages out of books, because to her, they have hidden meanings. She speaks to herself while smashing mirrors all over the house. Not exactly the picture of mental stability. After this visit home, and a few minor anxiety incidents on campus, Luke seeks out the help of his school counselor Dr. Braun (Chukwudi Iwuji). Dr. Braun urges Luke to reconnect with some of those things from his past, including possibly exploring his relationship with Daniel. It’s this clinical recommendation that brings Daniel out, bigger and more influential than ever.

At first, this manifestation of Daniel is exactly what Luke needs. Daniel is suave, handsome, and well spoken…basically all of the things that Luke isn’t. He gives Luke style tips, helps him meet girls at parties, even helps him pass his exams in one of the films most enjoyable scenes. In these moments it has the feel of a buddy comedy, or anything similar to every other college rom-com you’ve ever seen. But as Luke starts to forge meaningful relationships, Daniel starts to manifest all those dark behaviors that caused Luke to part ways with him in the first place. Only now, Daniel seems to have a strength and determination that wasn’t as pronounced when they were kids.

The lines begin to blur as to whether Daniel is real or a figment of Luke’s imagination. We know that Daniel is fictitious, but things begin to manifest in a way that starts to cast some doubt. Can other people see him? Is Luke aware of the times that Daniel seems to be in charge? This is actually my only major complaint with DANIEL ISN’T REAL. The film has a very strong message about the stigma of mental illness, the path to getting help, and the difficulty in coming to terms with the fact that you may not always be in control. It’s when the film begins to introduce some potentially supernatural elements into the fray, that it actually cheapens what could be a powerful metaphor for the modern state of mental illness. There is still a good amount to enjoy, and enjoy it I did, but I felt that the message could’ve been much stronger.

Spirals are a common visual theme in this film, and it felt like the message itself spiraled away from all the groundwork that had been laid down before it. What could’ve been an important statement on the current state of mental health issues, ends up spiraling into a silly jaunt on the side of the supernatural. Miles Robbins is having his Hollywood moment right now, with films like BLOCKERS and the recent remake of HALLOWEEN. As good as Robbins is, Schwarzenegger is the absolute scene stealer here. As the affable Daniel, Schwarzenegger oozes charisma at every turn and it’s clear that he’s very comfortable in front of the camera. Mortimer is obviously a very talented director, and that talent is on full display here. In fact, I think DANIEL ISN’T REAL is his best work to date. It was simply that late decision to go the route of the popcorn flick that I take issue with. He’s good enough that he could’ve made a statement, and still given us the popcorn flick on the side. Regardless, It’s a fun film that falls just short of greatness.