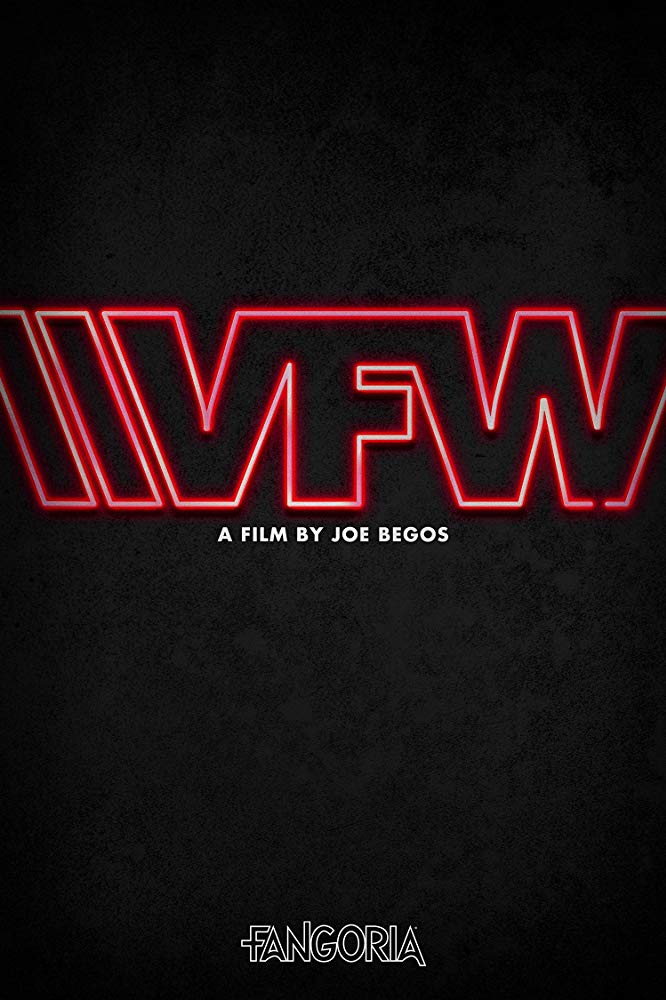 FEAR FOREVER’S next review out of the TELLURIDE HORROR SHOW is our pick for “best of the fest” with the film VFW. VFW is a balls-to-the-wall ultra-violent 80’s throwback reminiscent of something along the lines of RETURN OF THE LIVING DEAD meets GREEN ROOM meets STONE COLD meets ASSAULT ON PRECINCT 13. I know what you’re thinking…that’s a lot to wrap your head around. However, It’s all wrapped up in a beautifully bloodsoaked package like an early Christmas present for horror fans. The film is absolutely nuts, but in the most satisfying of ways. Presented by FANGORIA and director Joe Begos, the film is a symphony of blood, guts, and neon lights. It’s a love-letter to the gory tongue in cheek films most of us grew up on, down to its 80’s inspired synth-pop score.

First and foremost, I would be remiss if I didn’t start off by listing the cast, which is an absolute who’s who of genre cinema titans. Stephen Lang (MANHUNTER, DON’T BREATHE) plays the grizzled Vietnam Vet Fred Parras. He’s the owner and proprietor of the titular VFW in question. For our non-American readers wondering what a VFW is, here is some context…

Founded in 1899, The VFW stands for “The Veterans of Foreign Wars”. According to their website, their purpose is “to foster camaraderie among United States veterans of overseas conflicts” with a strong emphasis on promoting “Americanism” by means of education in patriotism and by constructive service to local communities.

Fred’s partner in crime is the incomparable William Sadler (THE SHAWSHANK REDEMPTION, TALES FROM THE CRYPT: DEMON KNIGHT), who plays his sidekick and drinking buddy Walter Reed. Rounding out the rest of the gang are David Patrick Kelly (THE WARRIORS, COMMANDO), Martin Kove (THE KARATE KID), Fred Williamson (FROM DUSK TILL DAWN), and George Wendt (HOUSE, CHEERS). See what I mean? My jaw was on the floor as legend after legend was paraded out on screen.

This group of hard-asses is meeting up at the VFW to celebrate Fred’s birthday, with no idea of what fresh hell is about to come for them. Across the street at an abandoned movie theater is a gang of leather clad druggie punks getting ready to make a lucrative drug deal measured in kilograms. In this heightened reality, the community has gone to hell with the introduction of a new street drug called “hype”. This new drug turns its users into super aggressive brain-dead mutant junkies. I mentioned RETURN OF THE LIVING DEAD, and those are the punks this film most closely mimics. The drug “hype” reminded me of the early 90’s Brian Bosworth vehicle STONE COLD. The film where Bosworth must battle Lance Henriksen and his legion of junkie bikers over another fictitious drug called “P2P”. If all of this is getting you salivating, I can’t emphasize how much you are going to love this film!

On the eve of this big drug deal, a young lady (Sierra McCormick) with a score to settle steals the drugs, with dozens of drug crazed maniacs hot on her tail. She runs into the VFW by chance and now it’s up to these tough-as-nails vets to reluctantly (at first) help her survive the night. And since she’s entered their establishment, they’re going to unleash all the violent fury and guerilla warfare they’ve learned over the years in combat. Just because they’re old and rough around the edges, doesn’t mean these vets don’t have a number of nasty tricks up their sleeves. Led into battle once more, these men are going to defend their precious VFW and this young lady at all costs. Let the carnage begin!!

This is literally the only information you need. It was obvious how much fun this must’ve been for everyone involved, and the entire cast just gushes enthusiasm for this crazy project. No one holds back, and nothing is out of bounds as the madness manifests itself on screen. This film had the late night audience cheering, applauding, and gasping in equal measure. It was easily the most fun I had watching a film the entire festival weekend. It’s the type of film that left the audience energized, and it was hilarious listening to the “hyped” up crowd discuss it as we all left the screening.

This film is a must see for horror buffs an 80’s enthusiasts alike. It has a definitive sense of humor while also maintaining a vicious mean streak. In my lead up article to the TELLURIDE HORROR SHOW I called Joe Begos “one of the most Metal horror filmmakers out there right now”, and VFW only solidifies this much deserved title. Not to mention the fact that he shared an entire bottle of whisky with everyone in the audience who was left after the screening, to celebrate his birthday. This film is an absolute gift to horror fans, and left the nearly sold out crowd satisfied on almost every primitive level imaginable. As of this writing VFW is slated for a limited theatrical run and VOD distribution in early 2020. I can’t urge you enough to do your duty as a red-blooded horror fan and check this out as soon as possible.

“VFW is a symphony of blood, guts, and neon lights. “

*Editors note: There is currently no trailer for VFW but below is the trailer for Joe Begos’ other 2019 hit film BLISS!