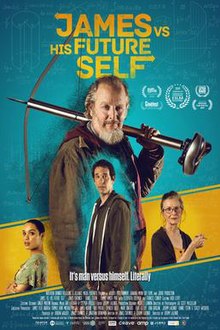 The TORONTO AFTER DARK FILM FESTIVAL kicked off on Thursday and will commence on October 25th. Now in it’s 14th year, the festival continues to be a mainstay for film makers and genre fans alike. FEAR FOREVER kicks off our TADFF coverage with the quirky, Canadian film JAMES VS HIS FUTURE SELF.

JAMES VS HIS FUTURE SELF is the story of a young man on the brink of uncovering the secret to time travel when of all people, his future self shows up to try and prevent him from doing that very thing. Part romantic comedy, part drama, and part science fiction this film, like time travel, is challenging to understand. JAMES VS HIS FUTURE SELF is about as clunky as it’s title but director Jeremy LaLonde manages to find a cute awkward heart at the center of this tonal tornado.

When it’s a comedy, it’s very much on point. HOME ALONE’s Daniel Stern stars as Jimmy, James’ future self. He is practically a live action rendition of Rick Sanchez from the beloved sci-fi comedy animated series RICK AND MORTY. He’s jaded, he’s bitter, he’s foul mouthed… and he’s hilarious. He waxes philosophical and scientific as he explains the perils of time travel to his unbelievably stubborn younger self to no avail. Every scene that includes Daniel Stern comes in as a blast of fresh air from the awkwardness of our lead character James played by Tom Cavanagh clone Jonas Chernick (who also wrote the film). The two characters (and actors) are worlds apart in this film from both an intentional and unintentional standpoint. Young James is a hyperactive and quirky science nerd archetype that quickly becomes tiresome shortly after his introduction. The performance by Chernick does more bad than good for this character flaw. For one, he looks much older than the intended age of the character, although his age is never specified. It seems like the character should be in his mid to late 20’s when in actuality Chernick is pushing 40.

When it’s a drama, JVHFS plays like an indie film from the early 2000’s.  The many attempts at emotional scenes in the film feel like someone who grew up on films like GARDEN STATE and WICKER PARK wrote them. This film would have absolutely slayed if it were released anywhere in between 2001 to 2005. However at this present time, it is old hat and kinda cringy. For a movie about time travel, it is very fitting that this film was released in the wrong time period. The B-plot involves James trying to connect romantically to his science partner Courtney (played by Cleopatra Coleman). The two of them are hyperbolized, Hollywood-ized versions of neurotic science geeks and the cringe factor reaches extreme thresholds when they are given unbelievably long scenes of romantic or emotion interchange. These fully grown adults fumble around trying to be cute and idiosyncratic which under the care of these actors and filmmakers comes across as embarrassing and hard to watch. Outdated techniques such as split screen during a heated telephone conversation do not help out in this department at all. The music direction in this film is also very derivative of early 2000’s indie romance flicks.

Alongside Daniel Stern, there are some great performances by Frances Conroy of SIX FEET UNDER fame and Tommy-Amber Pirie, although their scenes do not take up much of the run time. There are not really any “horror” elements to this film although there is one scene that has some shocking use of practical gore effects. It’s definitely more of a quirky romantic comedy, with science fiction elements being used as a backdrop a la RUBY SPARKS or ETERNAL SUNSHINE OF THE SPOTLESS MIND, while falling short of either of it’s predecessors.

All in all, the film was not a complete let down. Daniel Stern’s parts alone are enough reason to check this one out. Also the take on time travel and how it affects his future self’s memory is an interesting addition to what we already know about the movie based time travel lore. I will say that I’m glad I didn’t watch the trailer before seeing the film as it comes across way cheesier than it actually was. If I had seen the trailer beforehand, I think I actually would have passed on watching the whole thing altogether.

“JAMES VS HIS FUTURE SELF is a quirky romantic comedy, with science fiction elements being used as a backdrop”