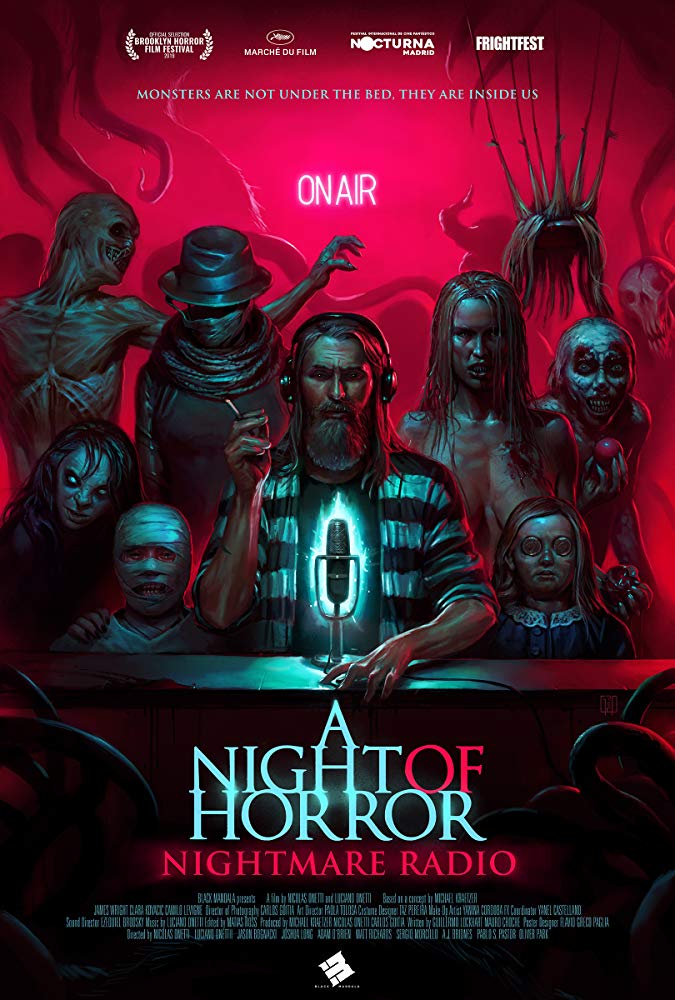 Ah, Anthologies! The tapas of cinema. Although for this round of bite-sized terror, the menu features rotting eyeballs, amputated hands, and dead fish. A NIGHT OF HORROR: NIGHTMARE RADIO is a new anthology from brothers Luciano Onetti and Nicolas Onetti. The story centers around a late-night talk radio DJ and his horror-themed show. As listeners call in, he introduces them (and us) to each terrifying segment.

The film showcases 8 shorts from around the world, all made in the last decade. It features directors Jason Bognacki, Joshua Long, Adam O’Brien, Matthew Richards, Sergio Morcillo, Pablo S. Pastor, Oliver Park and A.J Briones. As well as the wrap-around piece from the Onetti brothers. While these chapters each bring something completely different to the table, one trait can be seen throughout them all: quality.

Of course, however, I have my favourites. Joshua Long’s POST MORTEM MARY is a creepy reminder that people in the Victorian era used to dress up their dead loved ones and take pictures of them. Sergio Morcillo’s DROPS (GOTAS) is a chilling look at how trauma can manifest into something monstrous. Matthew Richards’ THE DISAPPEARANCE OF WILLIE BINGHAM has cemented itself in my brain with its gruesome, medical body-horror. Aboriginal actor Gregory  J. Fryer gives us a superb performance in both acting and narration, making this Australian short an affecting and visceral watch. A NIGHT OF HORROR: NIGHTMARE RADIO also brings us a female revenge creature-feature, a home invasion, a horror fairy tale, a gory trip to the hairdresser, and a terrifying reason not to follow a trail of balloons.

If I have one criticism of this otherwise enjoyable film, it would be that it drops the ball on gender representation. All ten of the directors involved in the project are men and I’m sure some of those places could have been filled by female and non-binary directors.
This bias is often not even consciously intended, but it is an issue especially in horror anthologies. 2012’s mega- anthology THE ABCS OF DEATH had three times as many segments as NIGHTMARE RADIO, yet only 1 short out of 26 was directed by a woman. And its sequel? Only 2 out of 26.  That’s not to say we aren’t improving; take last year’s A FIELD GUIDE TO EVIL, for example, – 3 out of its 9 directors were women. A NIGHT OF HORROR: NIGHTMARE RADIO is evidence that we still have somewhat of a way to go until gender equality becomes second nature to those looking to collaborate in film.

A NIGHT OF HORROR: NIGHTMARE RADIO has opted for cohesion by framing their slide show of horror within its own broader story. After each vignette we are brought back to our host, Rod, alone in the studio with no one but his increasingly sinister callers. The ‘Nightmare Radio’ storyline is at a disadvantage because it is drawn out over the film’s runtime, but without it, we would not have such an effective anthology. Though he is no Crypt Keeper, James Wright does a decent job of drumming up the atmosphere. Even if, a lot of the time, his choice of cadence is strange.

The main downfall of anthologies is the inconsistency that happens when not all of the short films are as strong as each other. A NIGHT OF HORROR: NIGHTMARE RADIO mostly manages to avoid this. As the Onetti brothers have shown us, a night of horror is an entertaining night indeed

A NIGHT OF HORROR: NIGHTMARE RADIO had its North American premiere at this year’s BROOKLYN HORROR FILM FESTIVAL, which started on the 17th of October. Judging by this year’s line-up, Brooklyn Horror Film Festival should be considered one of the East Coast’s best genre events this Halloween season.

“While each chapter of A NIGHT OF HORROR: NIGHTMARE RADIO brings something completely different to the table, one trait can be seen throughout them all: quality. ” 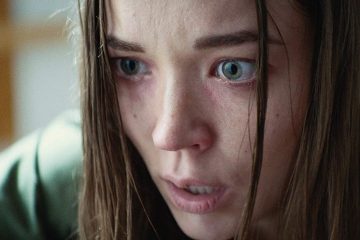