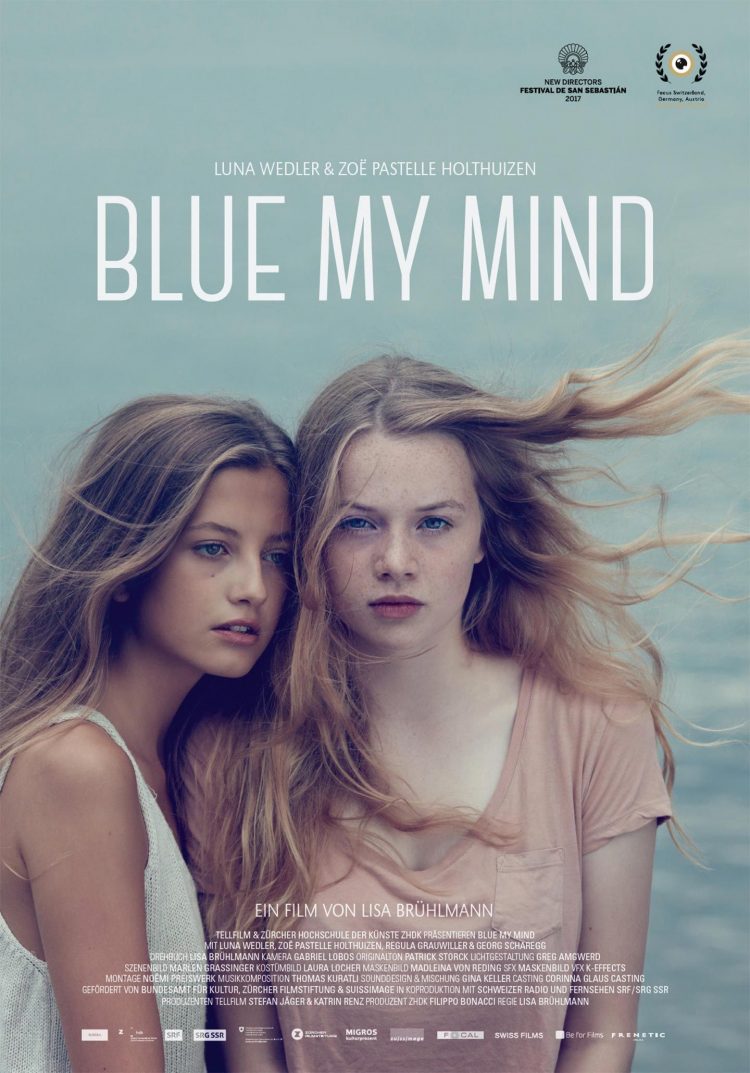 Many fantasy and horror-fantasy film deal with monstrous changes as an allegory for female puberty. Think of films such as GINGER SNAPS, JENNIFER’S BODY and the more recent RAW and it is clear that a sexual awakening as a young woman can be monstrous.

The newest films to tackle this theme is the Swiss fantasy-drama BLUE MY MIND, directed by actress turned writer/director Lisa Bruhlmann. The film had its Canadian premiere at FANTASIA FILM FESTIVAL last week. When growing up, girls discover that as a society we over sexualize women and they are made to feel they are only as important as their bodies. BLUE MY MIND asks the question: what if there was something else for girls to become other than adults?

Exploring themes of belonging and teenage disillusionment, BLUE MY MIND follows fifteen year old Mia . Mia finds herself in a new school and wanting to fit in with the cool kids who smoke, shoplift and do all other kinds of rebellious acts. All teenagers feel like they are weird and different to their peers but Mia has something extra strange going on. She has urges to eat her mother’s goldfish, her feet are changing and unexplained bruises appear on her legs.

While BLUE MY MIND does have some seriously unsettling body horror, it is ultimately a film focused on the harsh reality of adolescence and breaking away from it. I often find foreign films to have refreshingly realistic portrayal of the teenage experience and BLUE MY MIND is no exception. Films such as THIRTEEN and KIDS are similar however BLUE MY MIND transcends the mundanity of these films. Like other foreign coming of age films, BLUE MY MIND shows the vulnerability and immaturity of teenagers. The film is at times challenging and confronting, but that is its goal.

Although BLUE MY MIND is not action packed, the film is well paced, with just enough gruesome and eerily magical practical effects to keep you hooked on the supernatural story and enough relatable character motivations to make us care about the drama. In terms of acting this film breaks out of the Hollywood idea of casting actors in their late 20s early 30s as mid teens. I think this is a good thing; the cast are young but very capable and it easier to see them as kids in over their heads. Luna Wedler is not only ethereal to look at but was brilliantly sympathetic as our main character.

BLUE MY MIND’s colour scheme also reflects its themes. Mia’s life is, you guessed it, tinted blue. From the walls of her apartment to the places she parties. The cinematography is beautiful, with lingering shots and dreamy sequences which make the film feel like a modern fairy tale. BLUE MY MIND begins and ends with the meditative sounds of crashing waves. The sound design in this film adds to the magic, it emphasizes the theme of water as we constantly hear the drips and swishes of moving water. BLUE MY MIND also had a beautiful soundtrack. Its clear this is a very intentional and well thought out little movie.

BLUE MY MIND is director Lisa Bruhlmann’s debut feature length film and it, is a expertly crafted. The story’s ending was touching and the physical transformations were cool as hell. I wish this film had come out when I was younger as its message is empowering. For those who enjoy when the mythical is obtained with everyday life this film must have been a highlight of FANTASIA FILM FEST so far.

” BLUE MY MIND is a very intentional and well thought out little movie.”