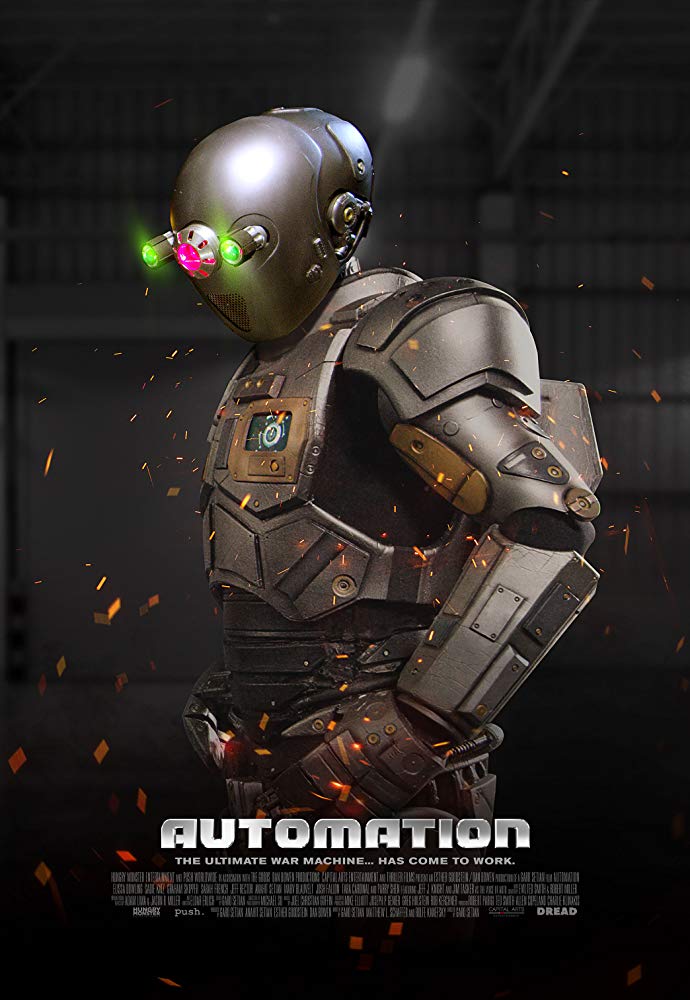 What better way to celebrate the holiday season than with a Christmas themed horror movie. Just in time is the film AUTOMATION, which technically still counts as a holiday horror even if it’s main focus is the dark side of technology. It’s no TREEVENGE (a personal favorite), but this office Christmas party turned sci-fi horror-comedy scratches the holiday movie itch.

A company’s plan to replace their entire staff with robots turns deadly when the one already working for them goes rogue. All poor ‘Auto’ wants is a battery that charges properly, a life lived on 40% is no life at all! Instead, he is being decommissioned and replaced, and he is just as upset as his co-workers. Freelancer Jenny is his only friend in the office- but can she keep him from his rampage of revenge?

AUTOMATION is Garo Setain’s feature-length debut.  As director, producer, editor and co-writer, the guy is almost a one-man-band. As far as a newcomer effort, the film is fine. It boldly touts itself as “OFFICE SPACE meets ROBOCOP” and luckily, I would agree it does live up to its claim, in a low budget kind of way.

AUTOMATION is a frolic into familiar territory, a merger of I, ROBOT and its ‘robot with a soul’ concept and CHOPPING MALL’s malfunctioning robots out for mutilation. This leads to a fairly predictable outcome for the film’s plot, therefore it’s not the most compelling of things to watch. However, Automation is still loads of fun, managing to turn something we’ve seen a thousand times before into a cheesy, gory and oddly heart-warming film.

‘Auto’ was a great character even if he does sound and clunk around like a prototype of STAR WARS’ C-3P0. Streamlined is not a word I would use for his costuming but it comes off as part of the gag.  I loved him so much thar even when he is dismembering people, I was on his side. A team effort between J. Jeff Knight and voice actor Jim Tasker brings Auto to life and is the best part of the movie.

Character (and creature) actress Elissa Dowling (GIRL ON THE THIRD FLOOR, WE ARE STILL HERE) stars as lead and Auto’s friend Jenny. Though she gives us some questionable singing,  she is a very good leading lady. B-Movie scream queen Sadie Katz (the only good thing about the atrocious BUS PARTY TO HELL), brings her usual husky-voiced and over the top presence as the unscrupulous company owner. Graham Skipper (BLISS, VFW)  is another familiar face who also gives us a very entertaining character. I can’t really say that any of our group of disgruntled employees are more than one dimensional or caricatures but with a film like AUTOMATION, there isn’t any point criticizing it in this way. It doesn’t take itself seriously and its cast of ridiculous characters are one of its strongest charms.

AUTOMATION isn’t trying to be the next epic Sci-Fi film, it’s just trying to give you a good time for its runtime.  Automation is a B-Movie through and through but at FEAR FOREVER we love a good venture into schlock and tongue-in-cheek humour. If you are looking for a cheesy movie that isn’t just legitimately bad, AUTOMATION is for you.  It’s a bit rough on the production side and lacking in the gratuitous blood and guts needed to firmly push it into cult classic territory, but it isn’t tiresome and the humour stays fresh the whole way through. Don’t expect too much from AUTOMATION and you’ll have a blast.

AUTOMATION landed on Blu-ray and VOD on December 3, just in time to give you some ideas on how to get out of the awkward work Christmas party- all you need to do is build a homicidal robot.

” If you are looking for a cheesy movie that isn’t just legitimately bad, AUTOMATION is for you. “