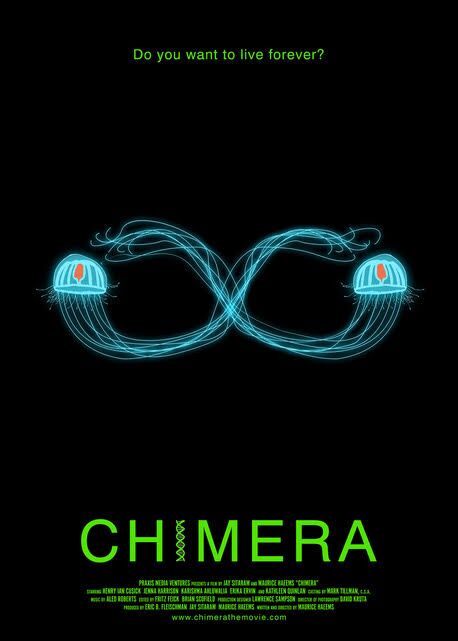 Things never go right when humans play God.  Horror has taught us this ever since Dr. Frankenstein created his monster. This horror trope is explored in a new and interesting way in Maurice Haeems sci-fi horror CHIMERA. Featuring a refreshingly diverse cast, this film definitely stands out and is extremely unique.

Scientist Quint (Henry Ian Cusick) has frozen his children alive to buy some time till he finds a cure for their hereditary disease, which causes multiple organ failure. If freezing the children alive didn’t sound like enough of a gamble, this haphazard scientist/doting father also has not figured out how to wake them up. Lastly, the icing on this risky business cake is that his methods for finding the cure are somewhere between morally ambiguous and just plain horrifying.

Much like 2009’s SPLICE, CHIMERA is built around experimentation with human and animal genes and has the same bleak tone. While the experiments carried out are amazing ideas of where scientific advancements can lead us, they are carried out in secret with seedy methods and dark locations. If you like your fingers attached to your hands, your organs inside your body and needles as far away as possible then this film is sure to make you shudder.  This is a film where the horror emanates from the violence, surgery and gore.

If  anything, CHIMERA is an exploration of modern scientific controversies through the lens of science fiction. Its disturbing imagery is meant to leave us questioning our own morals. First of all, it heavily features experiments on animals that while fanciful, may not be that far from what really goes on in real life. Perhaps the film is shining a light on how disposable living creatures are when it comes to animal testing. CHIMERA also explores the controversy around stem cells and has some gruesome sequences that will make you ponder just how horrific science can get.

The performances in this film come from the talent behind some of TV’s most popular shows with Henry Ian Cusick (LOST)as Quint and Erika Ervin (AMERICAN HORROR STORY) pulling off a fantastic evil henchwoman.  As well as Kathleen Quinlan (EVENT HORIZON) as the more than slightly unhinged antagonist Masterton.

The child actors are given the very loaded responsibility of delivering the majority of the expositional dialogue in the film. This feels like a very serious oversight as their performances did not fill the giant shoes given to them.  The child acting is really just that…..child acting.

The children, along with the scientists wife, haunt him by appearing through both hallucinations and flashbacks. They voice his inner doubts and act as narrators throughout the film- explaining what the pseudo-scientific jargon means. This storytelling choice was an odd one- coming from a child the lines felt forced and the big scientific words coming from a child’s mouth was immersion breaking. This mixture of past and present; real and all in his head just left me confused. The story was so convoluted that at times I found myself missing out on enjoying the film because I was too busy trying to decipher the plot. This is definitely a thinker’s film and one which required my utmost attention and a second watch.

While other elements may not come together, one that does is the spectacular cinematography. There are dreamlike sequences expressing hope and humanity made so by stunning camera work, lighting and set design. These same elements are also used to alternatively create a sci-fi nightmare. Scenes illuminated only by the various neon colors of scientific machines and cryogenic tanks expertly set the tone of the film as a dystopian horror movie.

CHIMERA is currently playing the festival circuit (including Sant Cugat Fantàstic fest, which is running from the 14th to 17th of June)and is receiving lots of awards and praise.  It is without a doubt one of the more original films I have seen and that alone should be a reason for film lovers to seek it out.

“Featuring a refreshingly diverse cast, this film definitely stands out for its uniqueness.”