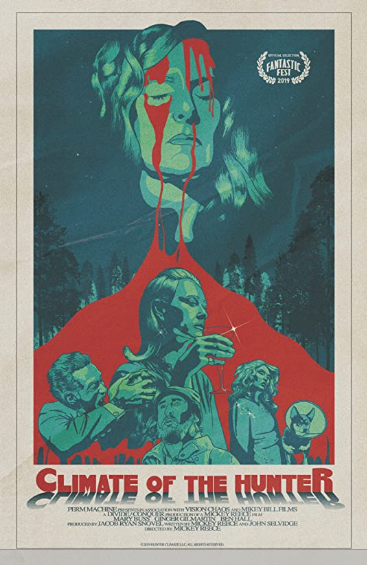 In the last few years of the decade, horror films started featuring a more raw, animalistic vampire. This trend may have appeared as a way to distance the classic horror monster from the teen romance epidemic of the mid to late 2000s. In doing so, perhaps we have forgotten how gloriously camp the suave, Dracula-based bloodsuckers can truly be.

A lovechild of FRIGHT NIGHT and an ABBA music video, CLIMATE OF THE HUNTER finds itself reviving the iconic monster through the glam, soft glow aesthetic of the decade it is set in. It’s a film that relishes in its absurdity, and the result is a masterpiece of subtle and dry comedy.

It’s 1977, and when an old crush of their’s visits, dysfunctional sisters Alma and Elizabeth once again throw themselves into competing for his affection. As the visit wears on, Alma begins to suspect the man is almost too compelling, concluding that he is a vampire. A rise in tension as other family members drop by to the isolated cabin puts a strain on the sisters’ bond- and Alma’s mental health.

“You’re a vampire…. and you look fucking stupid!”

The dialogue of the film is both poetic and hilarious at the same time. The intentionally superfluous monologues and smooth-talking from the suspected vampire and the thinly veiled digs and backhanded compliments passed between the two sisters are a delight to experience. All delivered theatrically as if a stage play were thrown in front of a camera and draped in well executed cinematic techniques.

The writing is all delivered by a cast who know just how to pull off the film’s consciously extravagant tone. Ginger Gilmartin‘s lead performance hooks you into going along with Alma’s conspiracy theories and assures that we stay on her paranoid ride.

CLIMATE OF THE HUNTER leans into its 70s period delightfully, and the costuming, hair and makeup are impeccable. The film is not afraid to bust out a baby blue jumpsuit or shag coat. The film centers around multiple dinner parties and the meals do not disappoint. The gaudiest things in your mom’s old entertaining cookbook make appearances. How do you feel about a crown of frankfurters around baked potato soup, with tuna and pear salad? (yes the tuna is served in the pear).

Director Mickey Reece chose a perfect era to replicate as it’s filled with horror films centered around ‘female hysteria.’ Perhaps by doing so, CLIMATE OF THE HUNTER reminds us that certain reactions we have to mental illness belong in the past. “You’re not well, you need help,” says Alma’s family, but do they ever try and provide that? They tell her she cannot stay alone in her cabin while isolating her with their words and actions. They are quick to dismiss her as crazy and therefore a lost cause.

CLIMATE OF THE HUNTER’s avant-garde style may alienate some viewers. Especially those not well versed in the films it pays homage to. I’ll admit that the glee this film instills in me comes from my familiarity with psychological thrillers from the era such as LET’S SCARE JESSICA TO DEATH. Reece took a risk by being authentic to the period, which may lead some audiences to dismiss it as ‘low budget.’

CLIMATE OF THE HUNTER’s vintage aesthetic may be too convincing for those who prefer modern films, but I am glad its director didn’t make sacrifices for the sake of the clear vision he had for his film.

CLIMATE OF THE HUNTER is available now on VOD.

“CLIMATE OF THE HUNTER is a film that relishes in its absurdity, and the result is a masterpiece of subtle and dry comedy.”