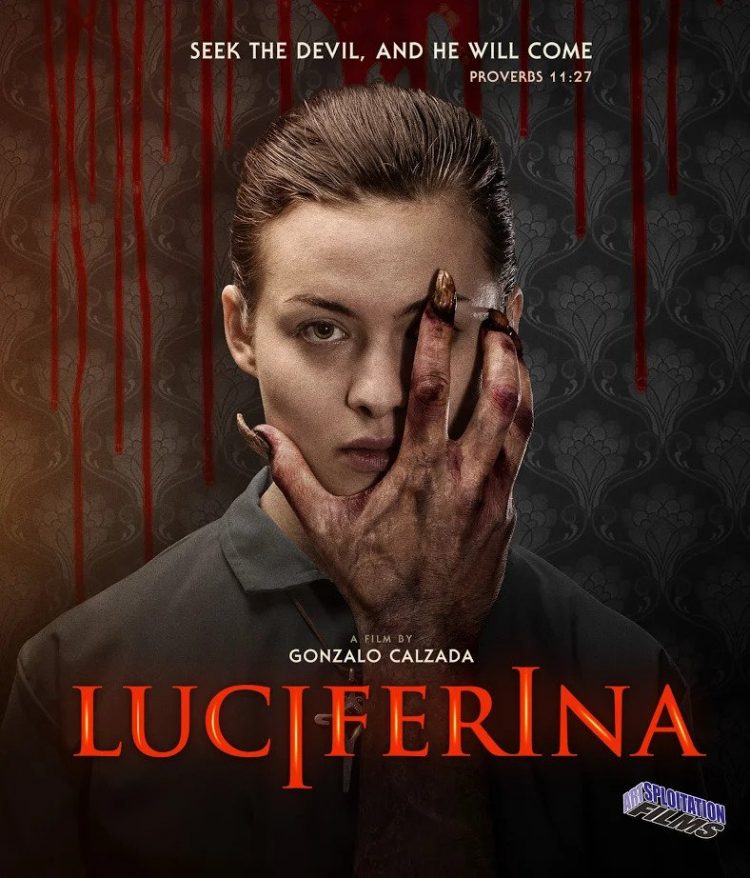 Admittedly, possession films aren’t really my thing. They tend to be VERY similar to one another and unless there’s something new to the story, you’re pretty much not going to top THE EXORCIST in my opinion. Personally, I’m more of a blood & gore connoisseur. Now that we’ve gotten that out of the way, I’m happy to report that LUCIFERINA is something a little different, and they don’t shy away from the viscera once the movie hits full stride. Allow me to elaborate…

LUCIFERINA is the story of a nun-in-training named Natalia, or Nati (Sofia Del Tuffo). Nati spends her days at a home for teens recovering from drug abuse. She seems very quiet and reserved, but she isn’t your average young woman. Nati has the ability to see people’s auras, sometimes they glow like sunlight while other times they’re black and cloudy. You can probably guess that the black and cloudy auras belong to some pretty unsavory characters. Nati is going about her day like any other, when one of the senior nuns tells her that her parents have been in an accident. Aside from the fact that her mother was killed in this accident, there aren’t any other details to be told. Nati doesn’t seem thrilled to be heading home, but it’s clear she has to.

Upon arriving home, Nati is greeted by her goth sister Angela (Malena Sanchez) and Angela’s human-garbage boyfriend Mauro (Francisco Donovan). Nati intrigues Mauro, specifically her virginity. He makes a few crude comments, and Nati proceeds up the stairs to see her bed-ridden father. He’s bandaged and bloodied and he hasn’t spoken a word since the accident. The room he’s confined to is littered with her mother’s artwork. Her mother’s artwork seems to have a central theme…Every painting is of the triangular uterus variety. The paintings are dark and grim. They seem to get more and more vicious as Nati looks around the room. In fact, more than one of the paintings seem to have been etched in actual human blood. LUCIFERINA is very much a feminine horror film, in terms of themes and imagery. This is just one of many times the audience will be confronted with difficult images like these.

After some brief exposition exposing Angela to be an adopted drug addict, and Mauro to be a near-rapist biker scumbag, we then get to the heart of the story. Angela and some friends are seeking out a shaman deep in the jungle to give them a ayahuasca ritual. It’s a powerful hallucinogenic experience said to cleanse the soul…or in this case…maybe release the evil within. Nati is coerced into joining her sister and the group, but it’s clear that she’s a little curious herself. Nothing has seemed quite right since she’s been home. Everyone acts very strange around Nati, and it seems that the others may need her, and her purity to successfully complete the ritual. Or are these people just some dark vessel to get Nati into the jungle?

Once the gang reaches this deserted church-like structure deep in the jungle, Nati begins to have daydreams of an evil presence. I couldn’t help but compare that presence to Samara Morgan from THE RING, as it appears to be a woman in white with long black hair obscuring her face. Nati ignores these premonitions and they get into the ritual. The drug is dispersed, and it’s time to let the madness begin. Every member of the group begins to writhe and sweat in agony as the drugs take hold. Each person goes on his or her own little vision quest, but Nati’s journey seems very specific. Like, being born in the middle of a satanic ritual specific. It’s gory and pretty fucked up, and that’s just the hallucinations talking. When Nati awakens, she’s thrust into a pretty much full blown EVIL DEAD scenario complete with her newfound friends missing limbs and eyeballs. It seems that maybe not everyone in the group is who they say they are. 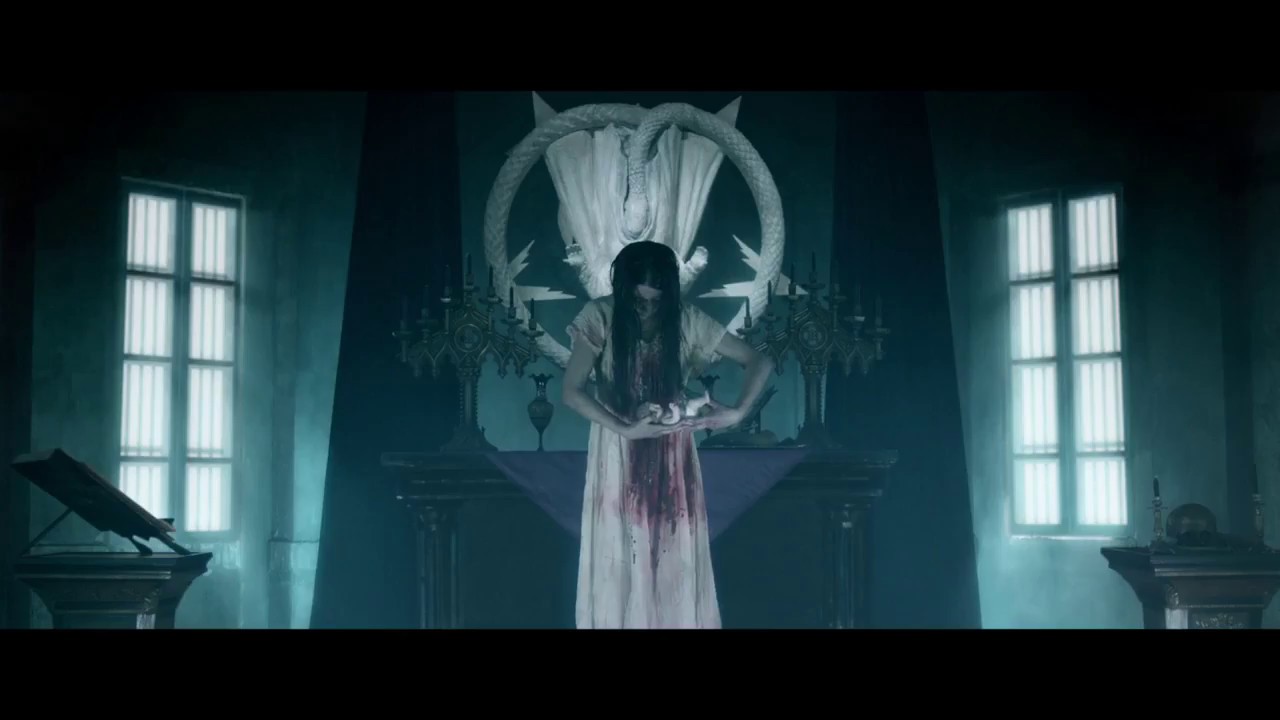 As I stated in the intro, I’m typically not wild about possession films but this one was different. I’ve also come to appreciate that the distributor, Artsploitation Films, hasn’t really steered me wrong yet. I like my horror edgy, and LUCIFERINA is definitely that. Not just in terms of gore or sexuality, but in exploring some larger themes about the corruption of family and innocence. 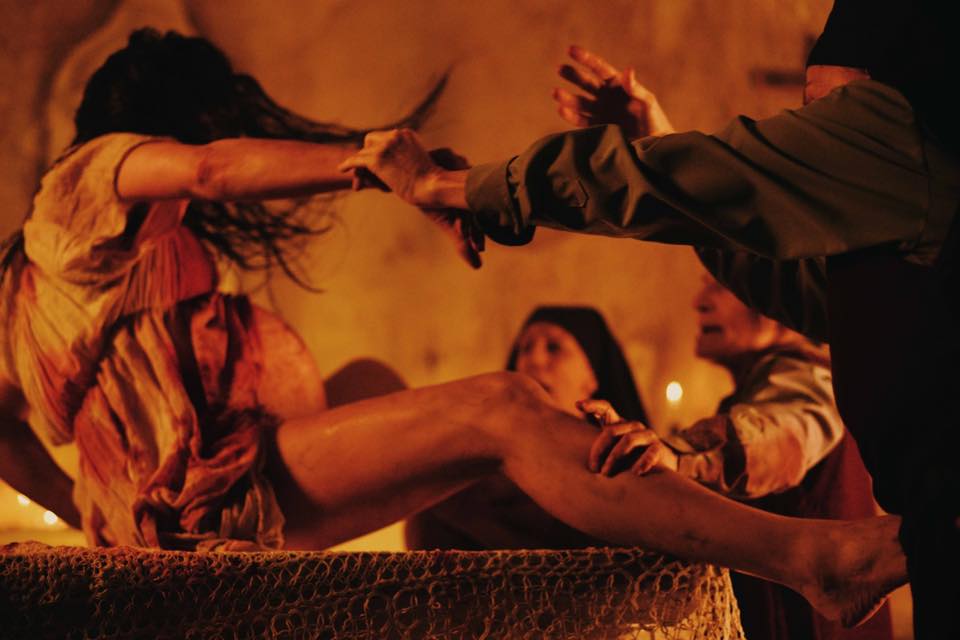 LUCIFERINA isn’t without its flaws, but it does a fairly decent job of steering the viewer away from nitpicking, and more towards the larger thematic elements within. It actually felt like two movies to me, with a clear dividing line at the moment of the shamanic ritual. The film is very heavy on the symbolism (literally), which some viewers may find a little too on the nose. I wasn’t particularly bothered by it, but it was noticeable. The film also shows three specific symbols during both the opening and closing credits, which leads me to believe that LUCIFERINA might be a part of a potential trilogy. It seemed to me like there were some bigger ideas that may become clear if that’s the case. If not, I can only judge what I was presented with and LUCIFERINA is a solid entry into the possession genre, even if it is a little misguided at times.

LUCIFERINA  is available on Blu-ray today and on VOD  on December 4th.

“LUCIFERINA is a solid entry into the possession genre, even if it is a little misguided at times. ”