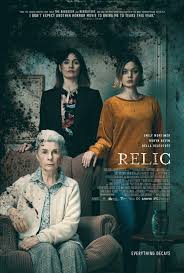 Sometimes a horror film is well…more than just a horror film. That’s sort of the beauty of the genre. It can be a mindless slaughter-fest, or it can be a cerebral challenge that forces us to deal with our fears from a safe distance. It can be confrontational, it can be cathartic, it can be almost anything it needs to be, the rules are made to be broken. It’s why I love this genre so much. It’s pretty hard to put “horror” into a neat little box. Personally, I like my horror a little on the confrontational side. I like it when there’s a message or a deeper meaning than what is being presented. That’s not to say that I don’t enjoy a masked maniac stacking teenage corpses a mile high, but I always appreciate a horror film that takes us beyond our own fears and emotions. Those are the ones that tend to dig their claws into the flesh a little more.

Upon receiving my screener for IFC Midnight’s latest film RELIC, I kind of anticipated your run of the mill paint-by-numbers haunted house flick. I should’ve known better coming from IFC, a label many genre aficionados have come to know and trust over the years. What I got was a deep meditation on loss, grief, and the inevitability of death that is coming for us all…some more quickly or painlessly than others.  It’s a heavy film. It’s deeply rooted in the pain and the helplessness we all feel dealing with the mortality of a loved one. Sure, it takes a few queues from the supernatural realm, but it also takes those queues from the most human of places, being unable to rationalize the things we don’t understand, and quite frankly, can’t accept.

RELIC takes place in the rural suburbs of Australia, presumably Melbourne, due to several plot details. The film centers on three generations of women converging to assist the eldest with her possible dementia. The grandmother, Edna (Robyn Nevin) is a fiercely independent woman, with a reluctance to accept help from anyone. Edna’s daughter Kay (Emily Mortimer) and granddaughter Sam (Bella Heathcote) arrive to help Edna after a series of events lead them to believe that perhaps Edna can no longer live on her own.

The film starts off on an unsettling note, since Edna is missing from her home with no trace of where she could be. Kay and Sam contact their neighbors and relatives, and eventually the police since Edna has been gone for days. Kay and Sam begin to straighten up the house, and Kay tells Sam about some of their family’s dark history. Most notably in the form of a great grandfather who lived in a cabin on the property, and suffered from severe dementia himself. It’s apparent that Kay has some very bad memories of the cabin he lived in, so much so that it causes her to have nightmares. It was a place she was threatened to be locked in if she misbehaved as a child. It’s unclear if she suffered any physical abuse, or if these scars are purely psychological. Either way, she was relieved when he died and the cabin was torn down. But as a tribute to this mysterious patriarch, one of the stained-glass windows from his old cabin has now been incorporated into the entryway of Edna’s home.

After several days of Edna being missing, she just suddenly appears at home, almost as if nothing has happened. Her feet are dirty, she seems distant, and she offers no real explanation as to where she’s been. Kay and Sam decide not to push the issue for the time being, but this is the first of several indications that things are not as they seem. The next red-flag is in the form of the neighbor boy Jamie (Chris Bunton). Jamie is a boy with Down syndrome that has helped Edna over the years when her family wasn’t there. Jamie comes to visit Sam one night, but he refuses to enter the house. Jamie tells Sam that he isn’t allowed to help her anymore, but he won’t go into detail. Sam tries to get it out of him, but he nervously leaves. You can just tell by his demeanor, something bad happened.

Next comes your usual haunted house tropes. Things go bump in the night, strange mold-like markings, water stains begin to appear all over the house, and things seem to be misplaced more frequently. But, all of these things are also coming with the deteriorating mind, mood, and health of Edna. One moment she is giving Sam her prized jewelry, the next accusing Sam of stealing it. It’s all the tell tale signs of dementia. However, there’s also a few locks on doors in the home, that don’t make sense. Are they meant to keep something out? Or something in? Who is Edna speaking to late at night? Is Edna possibly the only sane one here?

First-time feature film director (Natalie Erika James) uses the haunted house backdrop masterfully to deal with a much larger real life issue. The failing health of a loved one. It actually reminded me of the way Ari Aster dealt with the death of a family member in HEREDITARY by setting those same emotions into the backdrop of witchcraft and the supernatural. Both films weave their tragic human stories, into something larger or more abstract, as a means to help us rationalize the grief we’re facing. While at the same time seeing these characters, quite literally, transform into something else entirely. As if in some way that’s an easier explanation than what really might be going on.

RELIC is a film that may be too nuanced or subtle for many straight-up horror fans.  It’s a challenge. It forces you to question your own sanity, and takes us down some pretty dark corridors (literally) in search of answers. Kay and Sam have their own ideas and motives as to what should become of Edna, while at the same time Edna is firm in believing that pushing her family away may be protecting them from what she perceives to be a very real evil that is inherent in their bloodline. Who’s right? Is it all just a defense mechanism designed to hide the harsh reality from ourselves? The film leaves us asking some of these larger questions, and will have you asking them long after the credits have rolled. In addition to highlighting the fragility of the human condition, it also reminds us of the things that lie in wait for all of us. Whether that be a failing mind, a failing body, or a combination of several age related deterioration’s. We are often blind to the things we will become, or will become of us. Didn’t know a horror film could get you so introspective on your own mortality?…Heavy shit, right?

“RELIC is a deep meditation on loss, grief, and the inevitability of death that is coming for us all“