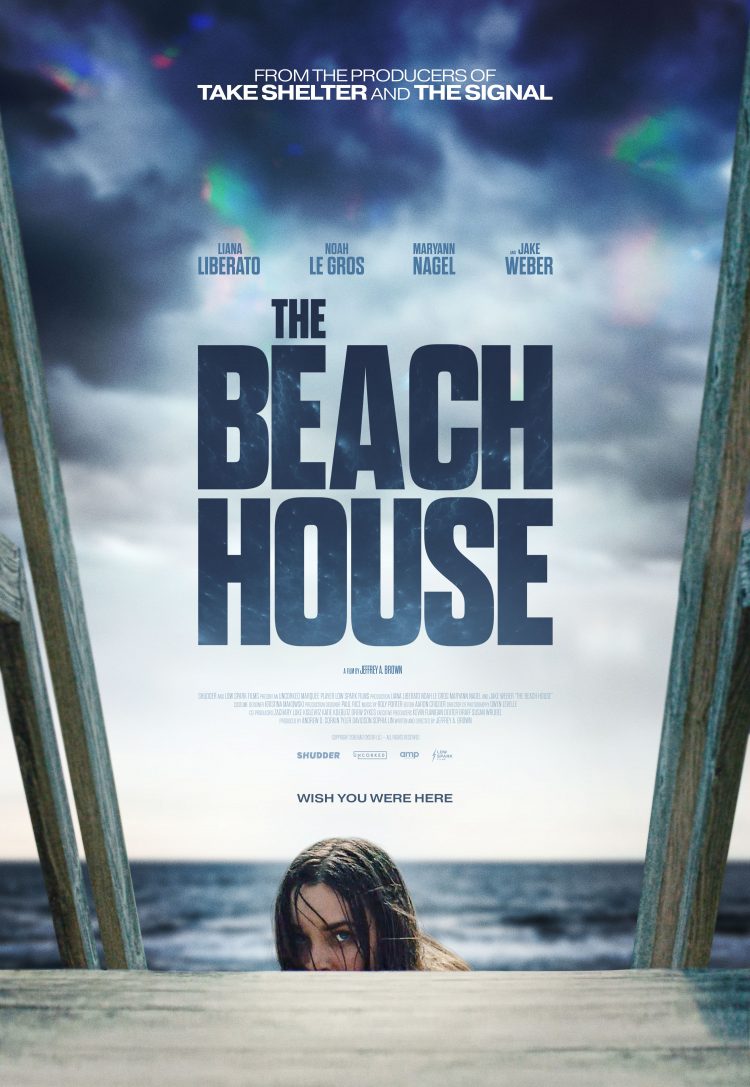 The deepest parts of our oceans have been a source of fear for horror fans since Cthulhu waved his old noodle arms up out of the sea. As inhospitable and unknown as another planet, it has spawned many a thriller from THE ABYSS to this year’s UNDERWATER.

THE BEACH HOUSE, however, is a different type of deep sea terror, bringing sea monsters to the surface with apocalyptic consequences. The first feature film from writer-director Jeffrey A. Brown; is a fresh take on the contagion genre. The film comes to horror streaming platform SHUDDER July 9th.

Astrobiology student Emily and her boyfriend Randall arrive at his family’s beach house for a chance to work out their relationship troubles amid sun and sand. They are surprised by an older couple already staying there, but the unintended housemates bond with a night of partying. They all awake to a mysterious fog, among other environmental anomalies, which begin to infect the holidaying couples.

First of all, THE BEACH HOUSE is one of the best films I’ve been able to catch in 2020 under our current circumstances (not that this detracts from it at all). It’s a Carpenter–Cronenberg lovechild and a potent mix of creepy, stomach churning, and emotionally affecting story telling.

Clear horizons become a source of menace in this intensely atmospheric film. An abundance of wide spaces, pristine sand and blue ocean does nothing to make THE BEACH HOUSE any less oppressive than its underwater subgenre counterparts. Its effective use of “daylight horror” will leave viewers just as unsettled at the thought of a seaside getaway as JAWS did in 1975. THE BEACH HOUSE manages to snap us out of our ingrained assumption that the sun will keep us safe from monstrous things.

An ingenious twist on end-of-the-world invasion, THE BEACH HOUSE uses the fact that more than 80% of our oceans are unexplored, to create an otherworldly nightmare. Though the film is full of gloriously gruesome practical effects, B-grade should never be synonymous with it. THE BEACH HOUSE is thought-provoking Science Fiction with Eco-horror undertones THE BEACH HOUSE is a feast for fans of body horror. It has it all: parasites, disease and bodily transformations. Its squirm inducing gore makes the botfly larvae Youtube rabbit hole (don’t lie, you’ve all been down it) seem like a fun idea in comparison. The film features de-evolution of the human body, a kind of sped-up ALTERED STATES, and creature design that could have been pulled straight from EXISTENZ (giant, flesh coloured, man o’ war jellyfish, anyone?)

I could make well justified comparisons to other horror sci/fi alumni, but I’ll stop there because THE BEACH HOUSE is its own uniquely clever film which holds its own.

With its flawlessly written characters and a quartet of capable actors, THE BEACH HOUSE keeps its humanity as the horror escalates. Liana Liberato makes for an alluring lead, carrying the lofty concepts of the film and breaking gendered stereotypes of characters in STEM industries. Joining Liberato is Jake Weber (Snyder‘s DAWN OF THE DEAD), Noah Le Gros (DEPRAVED), and Maryann Nagel (MY FRIEND DAHMER). With Nagel’s performance tragically capturing the film’s exploration of how the deterioration of the body can reflect the fragility of the human mind.

THE BEACH HOUSE premieres exclusively on Shudder in the US, Canada, UK and Ireland this week. Those still resisting the pull of subscribing to the streaming service, let THE BEACH HOUSE be the final straw that makes you give in.

“With its flawlessly written characters and a quartet of capable actors, THE BEACH HOUSE keeps its humanity as the horror escalates “.