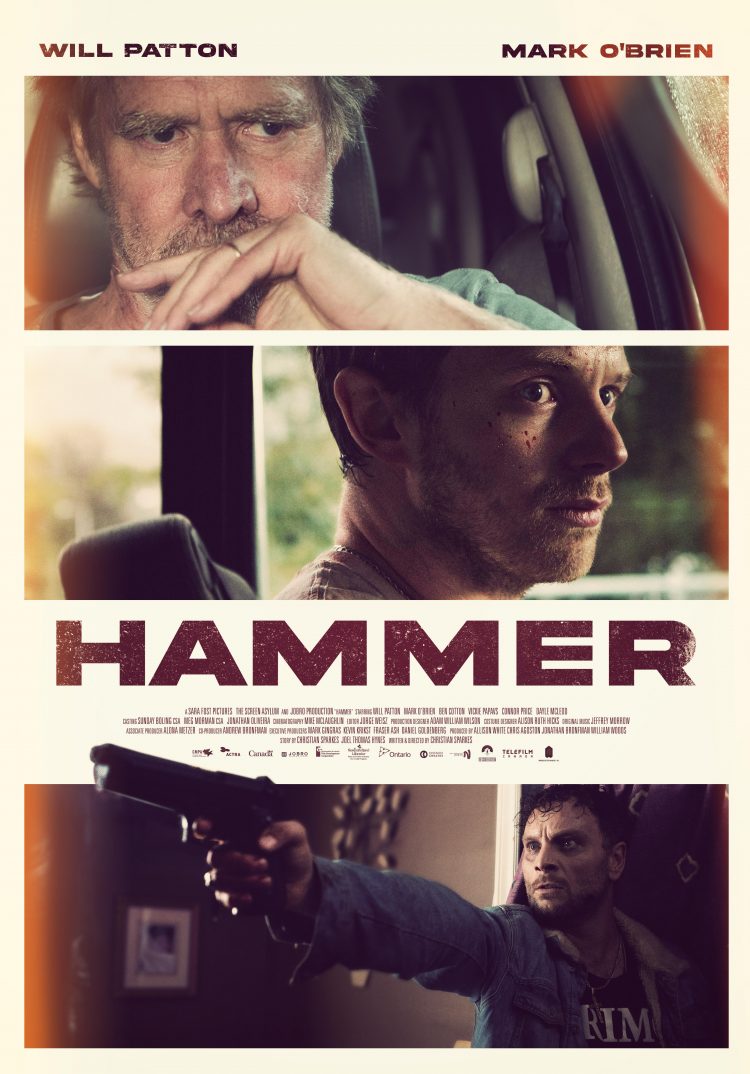 The staff of FEAR FOREVER LOVE horror movies…like…LOVE horror movies. That being said, we always welcome exceptional films that fall just outside of our umbrella. It’s a good reminder that sometimes an effective thriller can provide you with the same unnerving energy as their spookier horror counterparts. This was the case with the impressive crime thriller HAMMER. Although the film is not without its shortcomings, overall it proved to be a fast paced, white-knuckle “day in the life” snapshot of ordinary people thrust into extraordinary circumstances.

What do I mean by “day in the life snapshot”? That’s where the viewer is dropped into a story that started without them, and plays out in real time. HAMMER is this type of film. We almost immediately are inserted into a young man’s life on what is likely the worst day in said life.

HAMMER (I STILL don’t know why it’s called “HAMMER”) is the story of Chris Davis (Mark O’Brien) and a drug deal gone wrong. The first minutes of the film show Chris driving down some country roads to meet shady looking couple Adams (Ben Cotton) and Lori (Dayle McLeod). This is the moment that will change the course of these strangers’ lives permanently. Adams is happy to see Chris and mentions that it’s been a long time. Awkward pleasantries aside, the deal goes according to plan until a downed dirt bike and rider stop the trio from leaving on the road they came in on. The masked rider springs up off the pavement and proceeds to try to rob Adams. Adams see’s Lori and Chris exchange glances, and realizes that they are in on the robbery. Shots are fired and Chris flees with Lori on the bike.

Meanwhile across town Stephen (Will Patton) and Karen Davis (Vickie Papavs) are living out their boring suburban lives. They seem sad and disconnected, and their son Jeremy (Connor Price) is helping around the house. It’s clear that everyone is suffering. Through various conversations it’s revealed that Chris is their oldest son, but he’s somewhat estranged from the family and it’s taking a toll on everyone. After trying to sneak in a secret cigarette in the garage, Stephen decides to just go for a drive. While sitting at a stop light, he sees Chris zoom by on the dirt bike with blood all over him. Stephen quickly follows his son to see what is going on. Chris is alone at this point and reveals to his dad that he’s in some serious trouble. He also reveals that Lori was shot and fell off the bike somewhere in a cornfield a few miles back. Stephen sees no other way out but to help his son and the girl lying in a ditch somewhere waiting to die. Time is of the essence and it’s probable that some very dangerous people are also looking for Chris.

In the midst of all this turmoil is where the real story lies. It’s about a father and son reconnecting under the worst of circumstances. But, through it all, family is the only thing we can rely on. Of course, it’s also revealed that Adams is shot, but not dead, and looking to retrieve what was taken from him. It’s a cat and mouse style thriller where every character is trying to get one step ahead of the other. There’s not a lot of time for exposition, or breathing room, as we’re stuck in the situation with Chris and Stephen. It’s unclear who, if anyone, will make it out alive.

HAMMER is thrilling. It comes at you at 100 MPH and doesn’t really let off the gas pedal until the credits have rolled. Will Patton and Mark O’Brien both turn in excellent performances as the father and son duo, with a lot of moments of true tenderness and levity that felt authentic. Director Christian Sparkes does a really great job of wrangling all the story threads into something that is mostly satisfying to the viewer, with a few cool twists along the way. There are a few logic gaps that get in the way at times, but nothing too overwhelming, just some poor decision making that had me literally speaking to the television. For example, if there were say… an opportunity (or two) to kill “the other” and stop this madness from continuing…they wouldn’t take it! I chalked this up to  the characters being real people thrust into a bad situation, they weren’t killers after all. Maybe it’s the horror buff in me that knows, when you’ve got the killer on the ropes…you finish the damn job! All in all HAMMER was worth the ride. It’s been awhile since a movie had my palms this sweaty.

HAMMER is available digitally in Canada on June 26th and is distributed by A71 ENTERTAINMENT .