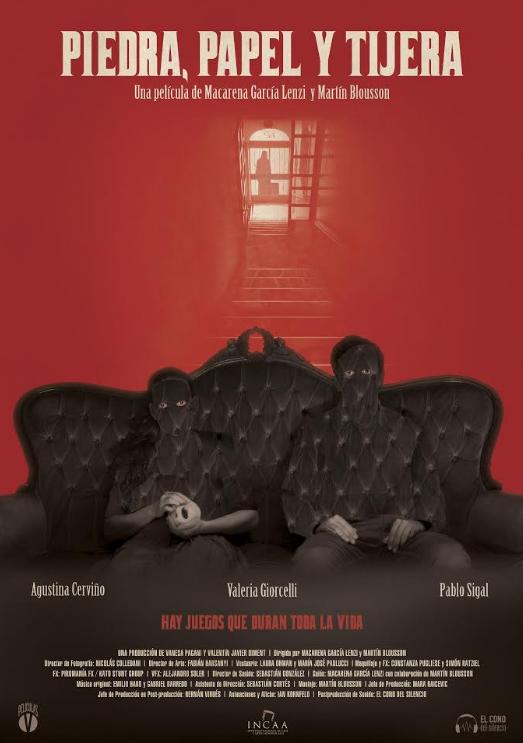 Fantastic Fest 2019 wrapped up a few days ago but its still delivering the goods: another outstanding international thriller, this time from Argentina. Argentina brought us the truly frightening TERRIFIED (ATTERADOS) in 2018, this year it brings us ROCK, PAPER AND SCISSORS (PIEDRA, PAPEL Y TIJERA) which is scary for its own reasons.

Writer-directors Macarena Garcia Lenzi and Martin Blousson (WHITE COFFIN, NECROPHOBIA 3D) are clearly very talented as they have given us a superb character study and an immersive film. Could this film be a candidate for my 2019 top 5? It is a definite possibility!

Magdalena arrives at her childhood home to collect her inheritance after her estranged father dies. There she finds her half-siblings, who have never quite grown up. Maria is erratic and obsessed with THE WIZARD OF OZ while Jesus is a cunning man-child who makes macabre home movies on his video recorder. When Magdalena “falls” down the stairs, she is bedridden and at the mercy of her brother and sister. So begins a horrifying situation of mind games and captivity, where Magdalena’s only hope is to pit the two against each other.

Whether intended or not, ROCK, PAPER AND SCISSORS is a love letter to Stephen King’s MISERY. However here the captor is obsessed with Dorothy and her ruby slippers instead of romance novels. Kathy Bates won an Oscar for her portrayal of villain Annie Wilkes and to be honest, there are strong shades of that level of performance in ROCK PAPER AND SCISSORS. Along with MISERY, this film gave me vibes of 2014’s SHREW’S NEST. Not many other comparisons can be made, however, as ROCK PAPER AND SCISSORS is extremely unique in a lot of ways.

ROCK, PAPER AND SCISSORS is a black comedy and the subtle humour really hits its mark. Maria and Jesus’ absurd antics are hard not to chuckle at. We also get to see Jesus’ home movies, which feature his sister’s pet guinea pig (whose name, of course, is Toto).

Valeria Giorcelli steals the show as Maria. In a really nuanced performance, she conveys her character’s deep-seated depravity as well as vulnerability. She shows us that ‘childlike’ can be a terrifying adjective. Despite her character’s psychological and physical attacks on her sister, I could not hate her. A well-written character for a talented actor.

The film relies heavily on the family dynamic and Valeria Giorcelli, Agustina Cerviño and Pablo Sigal give us a perfect dance back and forth. They never miss a beat in the power struggle between their characters- human embodiments of the objects the film is named for.

The unnerving relationship tension is palpable in this and we are left with a drawn-out dissolution of human decency. Because of its unpredictable characters, ROCK, PAPER AND SCISSORS was a riveting watch.

With being shot entirely inside a house, the film had to get creative with photographic elements but ROCK, PAPER AND SCISSORS looks pretty. The set design and colour scheme show us a house which has not been redesigned for decades. The setting serves to reflect isolation from the outside world and gives us insight into the fact that Jesus and Maria have been playing this twisted game of make-believe for a long time, shut off in the fortress Magdalena threatens to destroy.

Indeed some may find this film too slow or visually bland but I stand by my analysis of it as one of 2019’s greats. If you like your films quirky and memorable then I would put ROCK, PAPER AND SCISSORS on your watchlist.

” Whether intended or not, ROCK, PAPER AND SCISSORS is a love letter to Stephen King’s MISERY and may possibly be one of the best films of 2019″