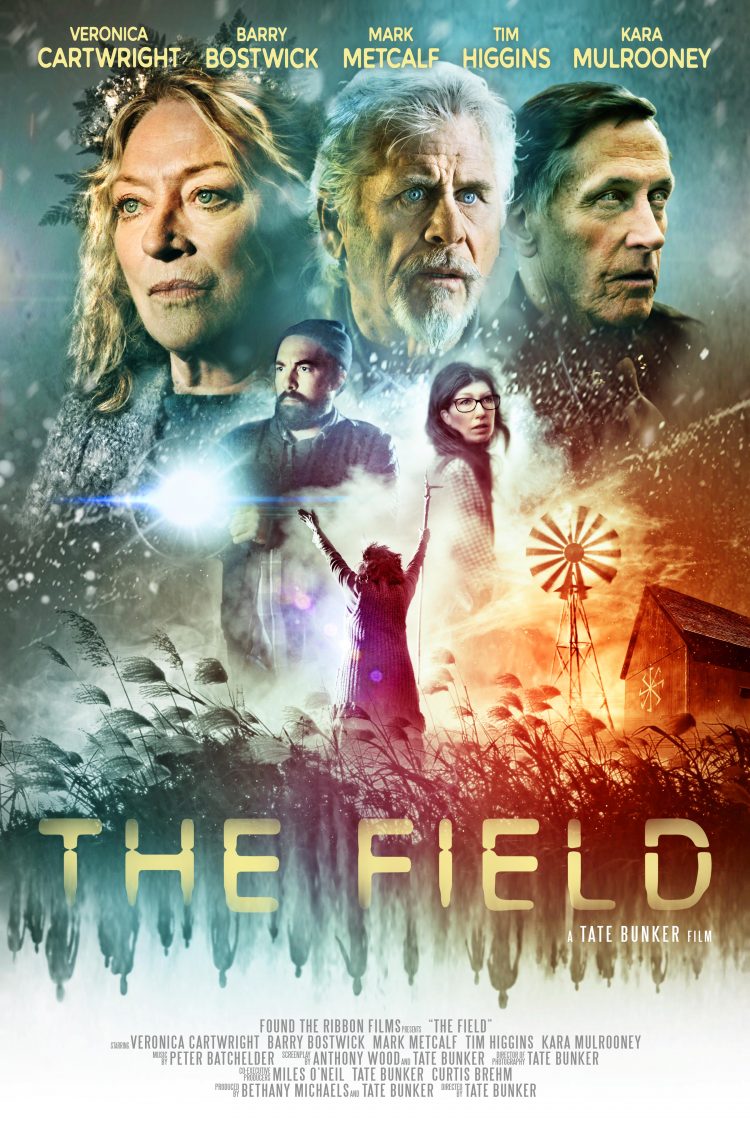 With the unprecedented success of films such as MIDSOMMAR and HEREDITARY, it’s fair to say that cults have played a major role in some of horrors more recent greatest hits. On first glance, Tate Bunker’s new film THE FIELD could be misrepresented as jumping on that taboo bandwagon. In actuality, THE FIELD is a fantasy tale more rooted in alternate dimensions than ritualistic sacrifice.

THE FIELD opens with a couple stuck in the middle of a storm. As lightning strikes, the woman disappears along with the flash. Years later, Ben and Lydia move into a farmstead in rural Wisconsin in search of the quiet life. However, the locals are unashamedly hostile, except for a peculiar old woman named Edith who lives at the back of the field that is their property. When Ben takes up photography, ominous figures start appearing in his photos. Meanwhile, Lydia discovers old photographs in their basement of what looks like satanic rituals being carried out in the field (just like the title!) behind their house.

The film is definitely a low budget affair, but is still worth a watch. It falls down in a lot of places while in others, it soars. One of the films high notes is its usage of a much loved past horror trend. Namely the ‘paranormal photography’ concept that was a hit in the early 2000’s and that would later contribute to the found-footage horror explosion. Drawing on films such as SHUTTER and the entire PARANORMAL ACTIVITY franchise,the film puts its own spin on entities you cannot see with the naked eye. The way the film delves into the more technical side of photography was very engaging and entertaining. But make no mistake, the film is a purely whimsical mystery and has none of the tension of the films that could have inspired it.

Unfortunately, THE FIELD does lose its grip in other areas. As Ben (Tim Higgins) and Lydia (Kara Mulrooney) try their best they lack chemistry; and other performances felt hollow. The stilted dialogue throughout was jarring, and cliched character motivations meant THE FIELD missed any chance of audience resonance.

THE FIELD tries to give us a bit of everything it thinks we want, although I’m not sure it lives up to its ambitions. It is full of well-executed ideas but they get suffocated under the sheer volume of things the film is trying to achieve.

THE FIELD is also a celebration of veteran talent with sci-fi/horror alumni Veronica Cartwright (INVASION OF THE BODY SNATCHERS, ALIEN) as Edith, although she is severely underutilized. She is joined by cinema legends Barry Bostwick (THE ROCKY HORROR PICTURE SHOW) and Mark Metcalf (TWISTED SISTER: WE’RE NOT GONNA TAKE IT, NATIONAL LAMPOON’S ANIMAL HOUSE). In an age where actors in their 20s and 30s play everyone from teenagers to the middle-aged, there is something pretty great about having a cast tipped in a more realistic direction.

THE FIELD’s fantasy elements are heightened by its ample use of colour grading. Each scene is intensely saturated, or toned in a way that pulls you into a world of its own. No scene is boring, visually at least. Some may not like the style, which at times feels a bit like an Instagram filter has been painted over the entire film. THE FIELD manages to turn farmland into wonderland.

THE FIELD isn’t perfect, but it is a smaller, more intimate take on some bigger sci-fi/fantasy concepts. If you have a high tolerance for a film’s transgressions, so long as its achievements are impressive, you will get a kick out of it. THE FIELD would be a fun theatre watch, and luckily it has a slew of upcoming festival dates and is also now available digitally.

“THE FIELD manages to turn farmland into wonderland.”