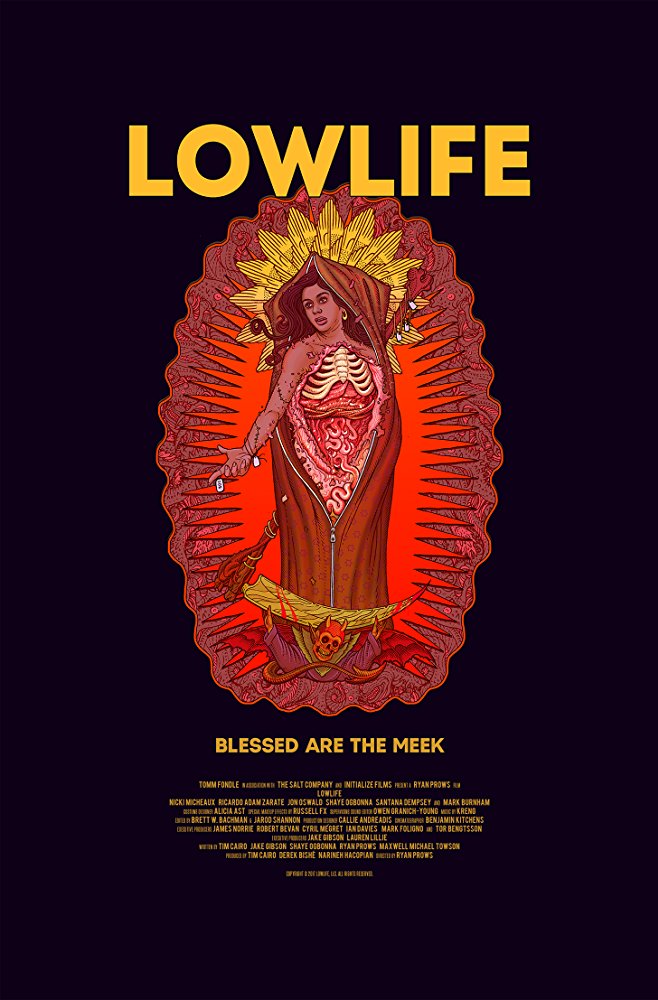 LOWLIFE is a film that gives you a lot to like, but it isn’t without its difficulties. Playing as a part of this year’s Toronto After Dark Film Festival, it’s definitely one of the stranger films in the program line-up. It’s not perfect, but there’s enough there to keep you invested for the duration. Although I would classify it as neo-noir rather than horror, it could probably be most closely compared to something along the lines of PULP FICTION. Don’t get too excited, because its criminal elements and non-linear narrative structure are pretty much where that comparison ends.

LOWLIFE tells the story of a seemingly random group of misanthropes, each with their own agenda. In fact, the film breaks these characters up into 4 subcategories: monsters, fiends, thugs, and criminals. The core of the story revolves around a luchador, a motel owner, a pair of street thugs, and a pregnant woman. Every character is looking for their own way out of their own personal slice of hell. Drugs and violence abound, the focus revolves around the pregnant woman and what our characters ultimately want from her. Some of our characters want her, some want her baby, and others are content with just stealing her organs. It’s a rat race to see who can get to her first.

Each of the characters are pretty eccentric in their own way, which is really where the fun lies. Everyone is under the thumb of a local crime boss/taco stand owner named Teddy Oso, or Teddy Bear (Mark Burnham) for those not familiar with Espanol. Teddy runs a variety of seedy businesses, with his organ-thieving racket at the center. Local wrestling legend and hero of the downtrodden, El Monstruo (Ricardo Adam Zarate), is married to the pregnant woman in question and his lineage lies with the decisions she makes. His progeny is all that matters to him. He is prone to fits of rage that result in a loss of sound and then unconsciousness. When he awakens it’s usually to all manner of carnage and dismemberment that he doesn’t even remember happening. I laughed several times, but most memorably when he woke up to find he was holding a gun with a severed hand still attached. It’s light, but also pretty macabre.

Next is the motel owner who has designs on getting the pregnant woman’s kidney for her dying husband. This was the least interesting of the intertwining stories, but pivotal to the overall arch of the film. Lastly, we are introduced to two career criminals who need to pull a job for Teddy or risk succumbing to a pretty grim fate themselves. One of the criminals was just released from prison and has a giant swastika tattoo in the center of his face, which he seems to forget about regularly. It may not sound like it, but this tattooed gentleman provides most of the comic relief in the film. It’s quite comical to see the situations his new ink gets him into, as well as the things he picked up in the can. Things like his high-minded outlook on racism, as well as his recent fluidity in Spanish that seems to throw his old partner for a loop. The film culminates with all of these personalities meeting at one location with very different outcomes in mind.

LOWLIFE has a lot of positive things going for it, but there are several issues that are hard to overlook. It mostly suffers from some uneven performances by several actors that come off a little forced and hokey, rather than gritty and noir. It’s almost as if some of the actors were playing to the crime drama elements, while others were going for a more comedic vibe. It just fails to meet in the middle. Although I was invested in a few of the stories (most notably El Monstrou’s journey towards redemption), several of the stories just fell short.

In addition to the uneven acting, there was just something that didn’t quite make for a rewarding payoff once the stories collided. It seemed as if all the fun was spent building up to the possibilities, and not enough attention was paid to the conclusion. Some of the stories are completely fleshed out, while others felt like vehicles to get the other characters where they needed to go. I would’ve liked some of the characters to have had a little more stake in the eventual outcome.

LOWLIFE is a fun ride for those with a sick sense of humor. I think it’s a good exercise for the director, as he is clearly a talent to keep an eye on. It’s a difficult filmmaking technique to execute properly, which is probably why Tarantino took home a screenwriting Oscar for his efforts in the genre. Reading this review on this website may lead you to believe it’s horror film, and it is not. That being said, it’s still a very fun journey into an exaggerated criminal underworld.