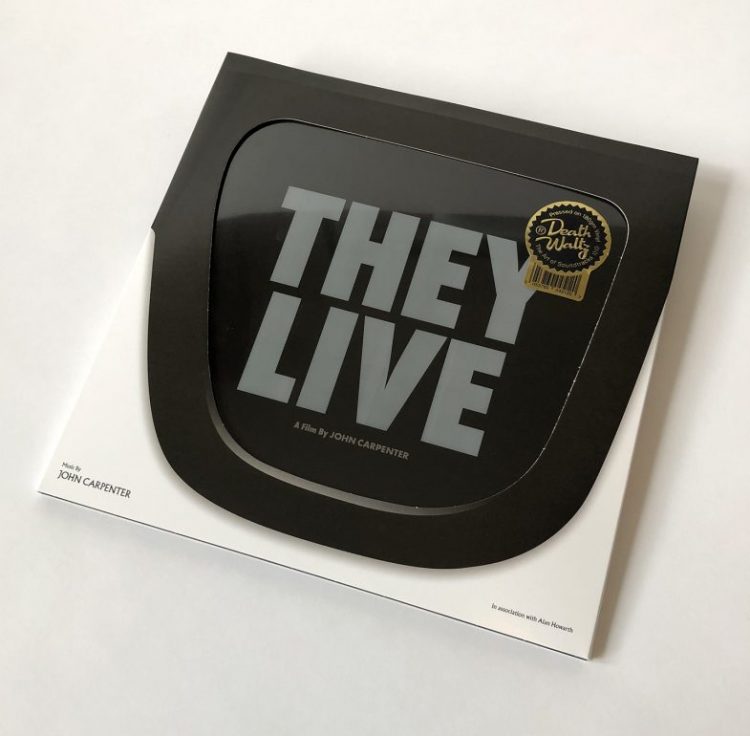 The irony of releasing a re-issue of the soundtrack to a film  about a world where the mass media is used for manipulative mental warfare so as to reprogram humanity into obedient, heavily consuming, big spending, over populating robots is not lost. That being said, for fans of John Carpenter’s  1988 masterpiece THEY LIVE, Death Waltz Recording Companies (Mondos musical imprint) recently released re-issue of the soundtrack on vinyl is an essential collector’s item. This is an incredible piece of art, inside and out, and worth every single penny.

Mondo is best known for releasing exceptionally beautiful and creative screen-printed posters for classic films, many of which are of the horror genre. Their creativity is not limited to posters; they have also released a series of film scores on vinyl through their sister label “Death Waltz Recordings.” The latest addition to the catalogue is the “THEY LIVE” soundtrack featuring original music by John Carpenter and frequent collaborator Alan Howarth. 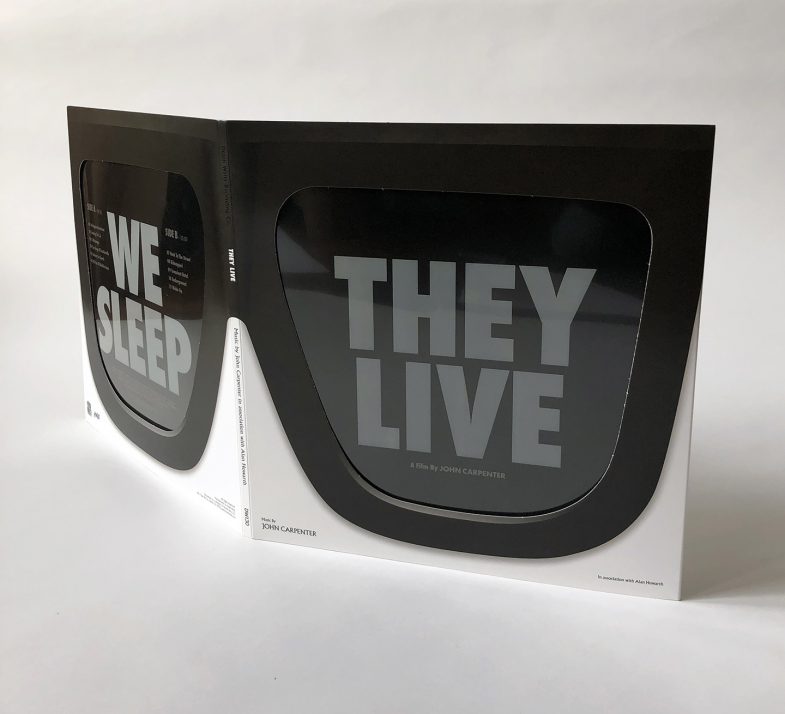 The first thing of note about this record is it’s stunning packaging. The gatefold cover depicts the famous “truth-seeing sunglasses” from the film with the title “THEY LIVE” on the front side and the words “WE SLEEP” on the back among the track listing. When removing the sleeve containing the disc itself, the title also slides out from the cover art revealing an advertisement for “Eye’s Alive” mascara, which nods to the films anti-advertising/anti-capitalism overtones. The second sleeve contains a booklet of liner notes as well as some specifics about the recording process written by Alan Howarth himself. The booklet makes for a great read while playing the record, even though it’s a challenge to read with every other line stating instructions to “OBEY” “COOPERATE” “YIELD” “CONSUME” etc. There are even pages of the booklet stuck together with fake bubble gum as a throwback to Roddy Pipers iconic line in the film that would later be repurposed for the DUKE NUKEM video game series, “I’m here to kick ass and chew bubblegum. And I’m all out of bubblegum.” The only downside to this tremendously creative package (beautifully designed by  Alan Hynes) is that will take you about 10 minutes to properly pack everything back in after taking it out. The vinyl itself is a gorgeous kaleidoscopic teal and red spin painting, mirroring the eye of the films alien creatures. 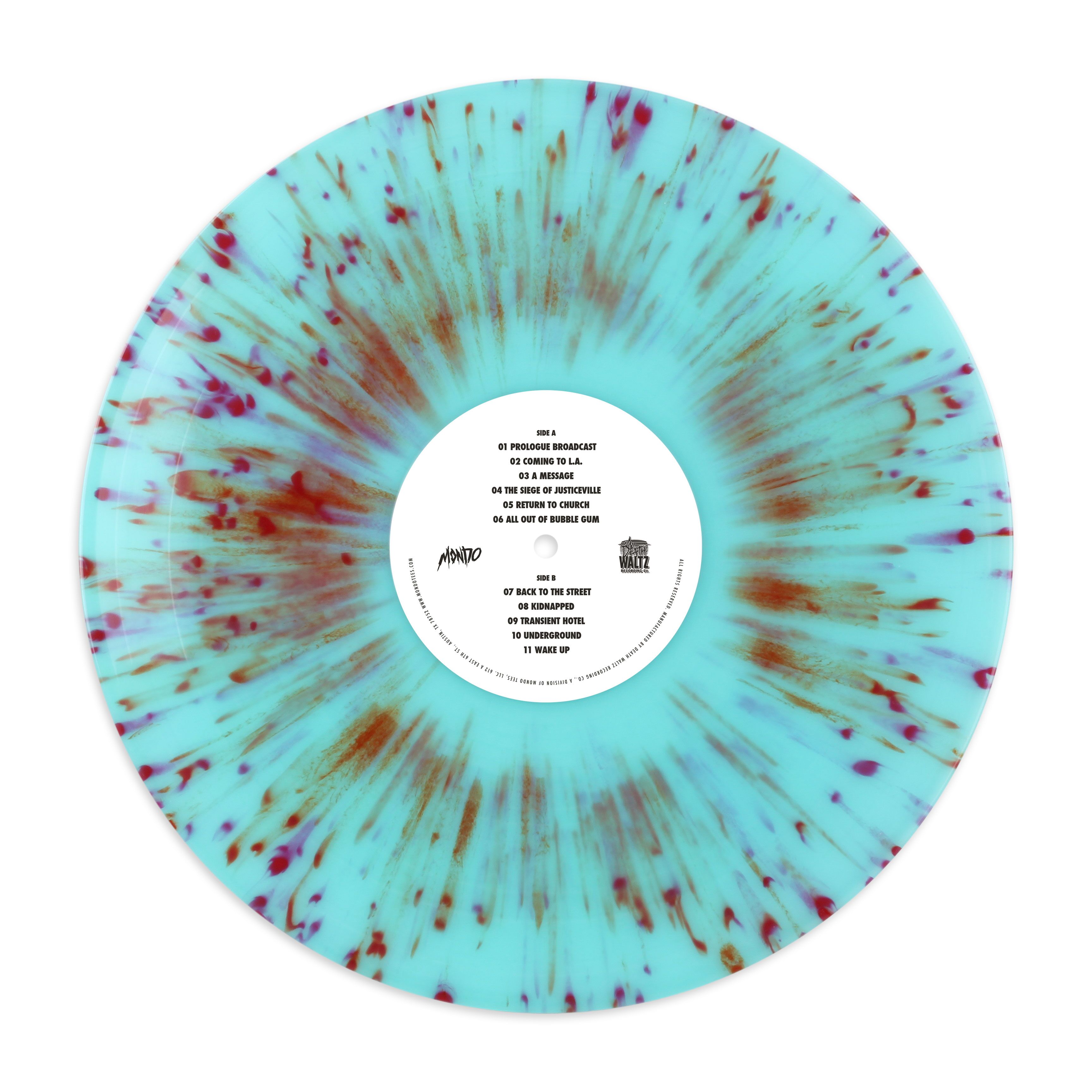 Moving on to the actual contents of the record, we start off with a distorted television transmission called “Prologue Broadcast”.  Frequency filters and distortion heavily manipulate the urgent words of John Lawrence’s character from the film inducing an onset of anxiety. This anxiety is alleviated ever so slightly with the following track “Coming to L.A” which is a sleazy blues track with a droning kick drum that hints at spaghetti western scores with intermittent harmonica swells. The low end is emphasized masterfully on this release and the inherent warmth of vinyl makes the listening experience all the more cinematic. 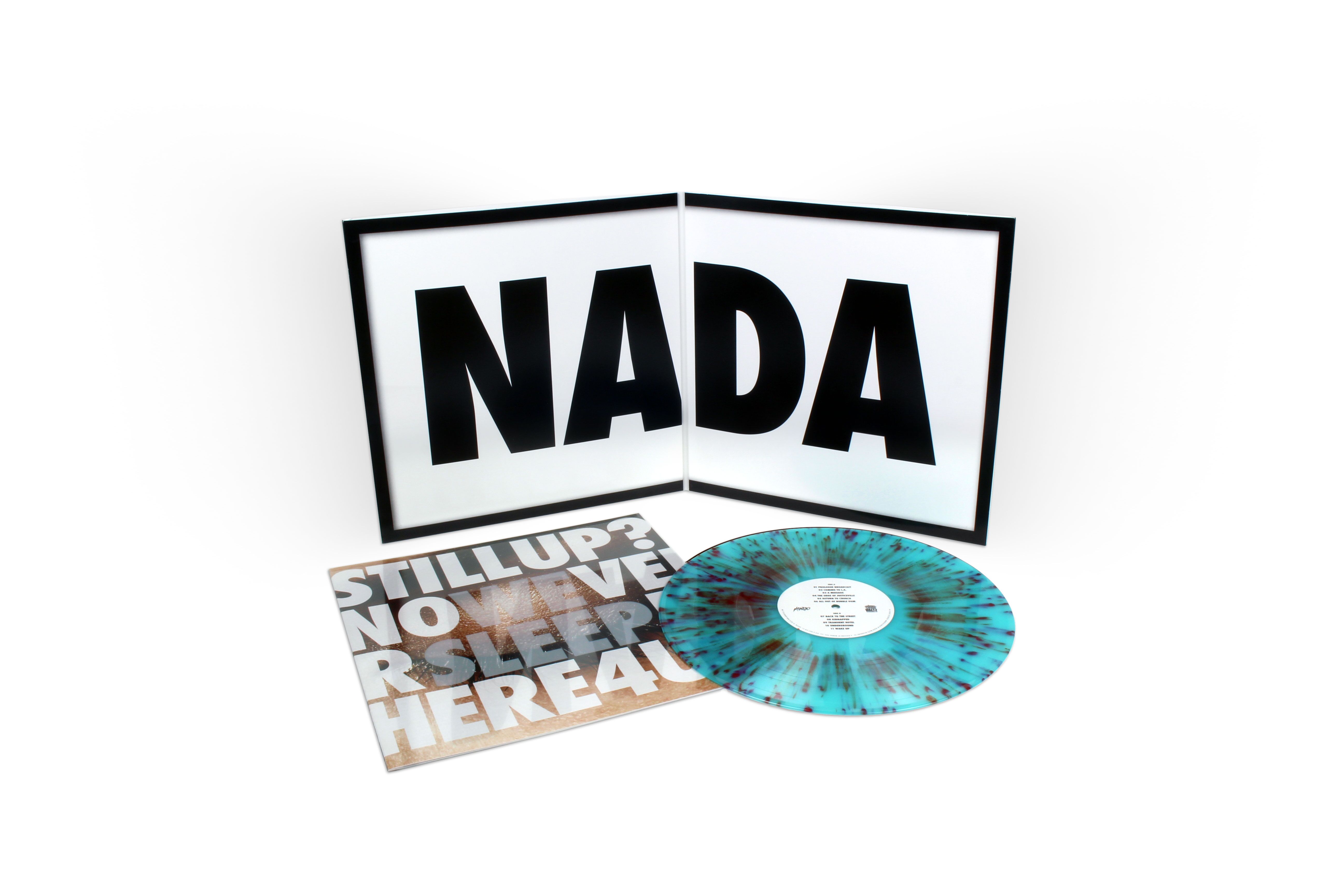 Side A runs at 18 minutes and contains 6 tunes that all share a similar tone. If not paying close attention to the breaks between tracks, it might even be perceived as one long musical composition. According to the liner notes, Carpenter and Howarth composed the music as the film played silently on a screen before them, creating a foundation of improvised keyboard lines. The finalized score reflects this as the skeletons of the songs keep it relatively simple with few chord changes and simple drum patterns. These skeletons, while not too varying from each other, are given unique personalities when fleshed out with acoustic guitars, saxophones, synthesizers and of course harmonicas. 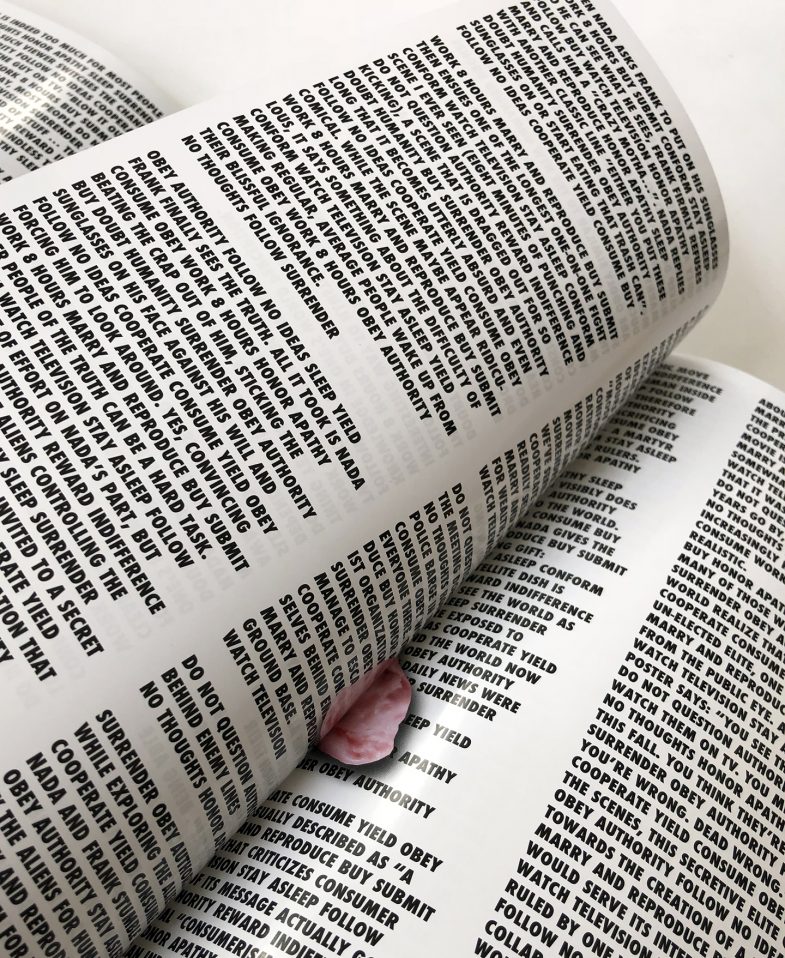 Side B is a bit shorter at 15 minutes and leans a little heavier into the electronics. The track “Underground” in particular starts off with a frenzy of whirring electronic noises, dissipating into a gentle synthetic rhythm. It’s almost akin to modern experimental electronic noise artists like Geologist or Dan Deacon. As the track finds it’s pacing it turns into a suspenseful orchestral piece, something that very well could have inspired the musical score for the original METAL GEAR SOLID. 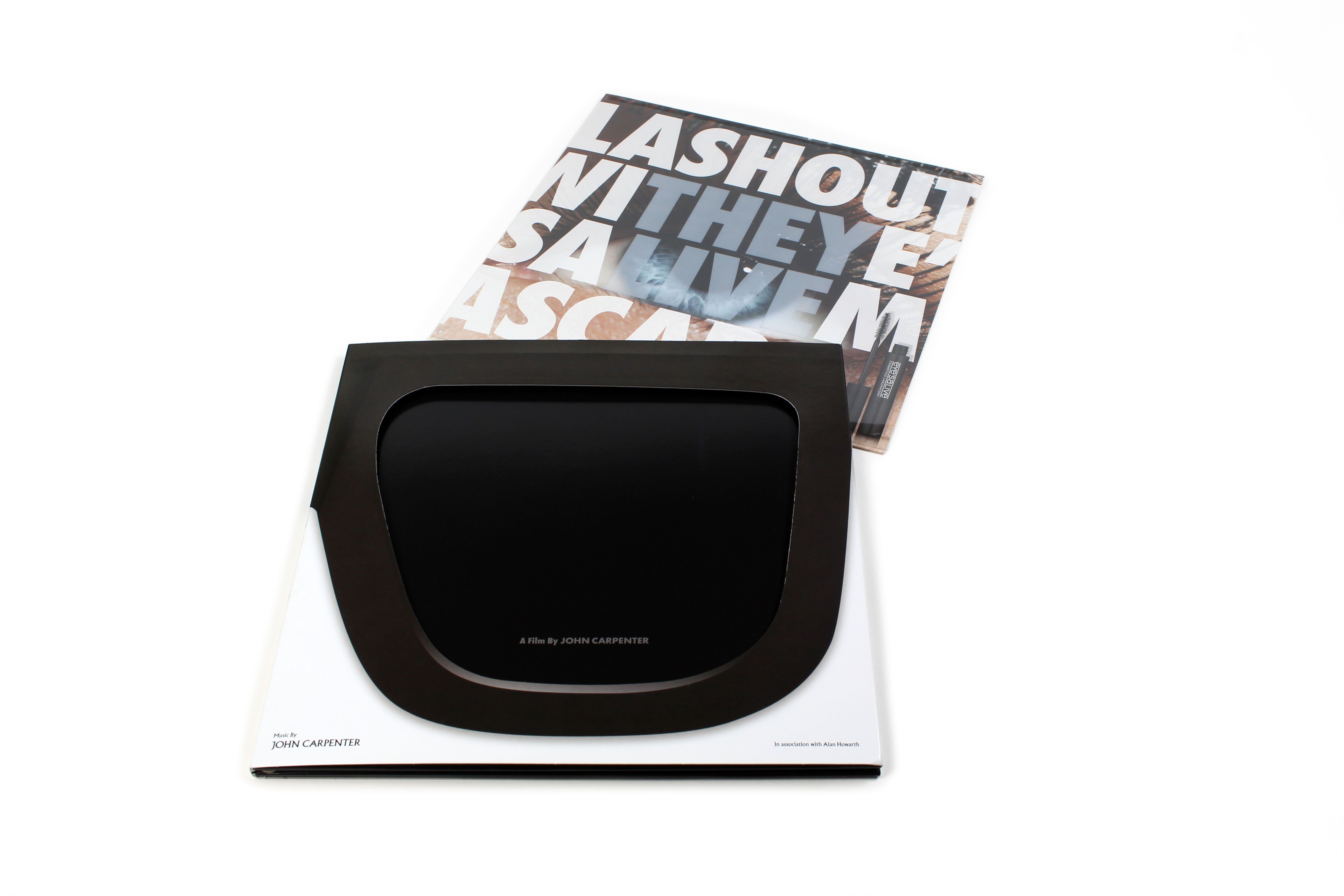 The album ends with its most 80’s sounding composition “Wake Up.” This track goes off the deep end into what some modern mainstream music fans might consider “cheesy” or “corny” with its up-tempo beat, fast slap bass and it’s squealing high pitched synths (think GHOSTBUSTERS theme song).  It’s fun, but definitely dated in the best possible way…Just like the film!

While this album does contain a lot of numbers that are virtually identical in terms of composition and sound that may frustrate and disappoint casual listeners, it is a precious artifact for die-hard fans of the film. Phenomenal packaging and a great batch of sounds and compositions, this album is drenched in nostalgia and is an odd but very interesting milestone in John Carpenter and Alan Howarth’s lengthy musical careers.

You can buy the record online from MONDO here or ask for THEY LIVE at your local record store!

“BUY THIS ALBUM. DO NOT QUESTION. OBEY.”